I know the pieces fit 'cause I watched them fall away.

Don't look now but we're already past the halfway point of the 2013 summer transfer window. Time flies when you're having fun! Or no fun, as it were the case. Point is, time flies and it's now been almost a month since we last checked in with the WAGNH Transfer Rumor League.

As the exactly zero comments wondering about the latest standings can attest, demand is high and the unwashed masses baying for useless information are about to break down the gates. Calm yo'self's and put away your wild attack-panthers - no, Lenny, that means you, too - and also please stop looting the petite giraffe pet supply stores for gold dust.

And no update until you unhand the Marko Marin. He's on a precious quest; you must understand. Fly like the wind, Marko! We're all counting on you. 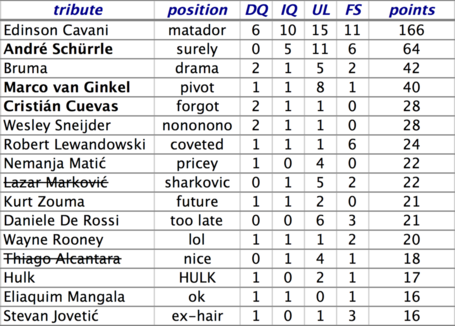 Since Edinson Cavani has not been officially announced at PSG, I'm still holding on to a sliver hope by not crossing him out. But most likely he's gone and with it his brand new record points haul in the Transfer League, absolutely obliterating Eden Hazard's 129 from last summer thanks to a combination of obsessive coverage, Twitter, and an unhinged owner. Cavani may not end up with the Chelsea prize but he's shown future contenders the exact recipe for success.

A new face near the top is Bruma. Having already collected the Pastore-Robinho-Mikel Memorial Award, Bruma will have to be satisfied with a second or third place in this competition. Not for lack of trying though; should plot lines fit for blockbuster movies be worth double the points?

Daniele De Rossi and Wayne Rooney are a couple oldies making a move past the 15 point mark, joined by supposedly freshly unavailable Kurt Zouma. I wouldn't mind if somehow we did end up with one these three, as long as that's not Rooney. Maybe Zlatan Ibrahimovic will swoop down on his white unicorn of fire and awesomeness and save us from that fate.