Welcome to the no fun transfer zone

Sometimes I doubt my commitment to sparkle motion; my own lack of faith is disturbing.

Share All sharing options for: Welcome to the no fun transfer zone

At the end of last summer's transfer window, I was excited for the road ahead. We were promised a revolution - a youth revolution - and we had a club legend to try to implement it. In case you don't want to follow that link, here's the chart that I posted then: the average age of Chelsea's major signings in the Roman Era. 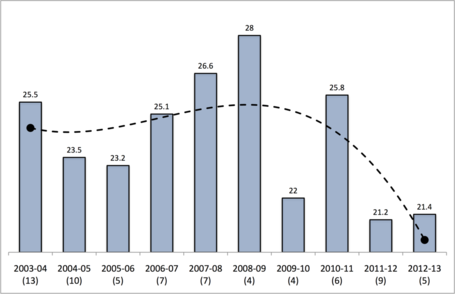 Later, we signed Demba Ba who upped the average to above 22, but the trend stayed true. Which is fantastic. Talented youth is the clearly the way forward. Buying the likes of Kevin De Bruyne, Romelu Lukaku, and Oscar, just to name a few, before their prime saves untold amounts of money and, in a more basic sense, actually allows the club to buy all those players. There's a good chance, for example, that Lukaku's "worth" will one day equal the total Chelsea outlay on those three combined. That's good business and good strategy. Kudos all around.

This summer, so far, has been no different. True, Mark Schwarzer is practically a thawed fossil but his status as a major signing is marginal at best. André Schürrle is 22. Marco van Ginkel isn't even of legal drinking age in the USA and won't be for several more months. The youth revolution is alive well and continuing strong into its third year. Not coincidentally, it's Michael Emenalo's third summer as Technical Director as well. Kudos all around.

Yet, I'm not having any fun.

I'm almost more excited by signing the ancient Schwarzer just because he's been a fixture in the Premier League for so very long. When Schwarzer made his top flight debut, I bought a Packard Bell computer with a 386 processor and I played lots of Tie Fighter, Sim City 2000, and Championship Manager 2. And now this cool Aussie, a senior football citizen will sit gloriously on our bench, telling others to stay off his lawn as he kicks back and enjoys life. Not to mention, it's funny that we signed somebody older than Hilário to be Petr Čech's backup.

My brain tells me that I should be very happy with the Schürrle and Van Ginkel signings. The latter especially was signed for peanuts and by all accounts has a fantastic future ahead of him. Yet I'm ambivalent about the Dutch under-21 international. He's no layer of gold paint on the Bentley. He's just a super-young kid who was super-good in a mid-level league. When was the last time a 20-year-old midfielder took a new league by storm? Even Oscar had his share of ups and downs.

Then there's André Schürrle. It's not helping my perception that he fluffed most of his lines in the Ballack testimonial. But people seem high on him, so my brain tells me his arrival is a good thing. He's essentially replacing Yossi Benayoun and Marko Marin, which is something on the order of infinity times infinity upgrades. But he's got awkward legs and he runs a bit funny and I use adverbs badly and he says "yeah" all the time. This is why I'm not a football scout; I'm just lukewarm on the whole thing. In fact, the most exciting thing about the German senior international is his suit game. Nice to see a young man eschewing slubby shirts and drop-crotch or generally ill-fitting pants or worse, cuffed shorts, for sharply tailored suits.

So where's my outrageous transfer to make me say "wow?" I hitched my wagon to Edinson Cavani's star but he kicked me out less ceremoniously than we kicked Pluto out of Club Planet. Worse yet, it's not like Zlatan Ibrahimovic is now available because of this; he'd be an utter fool to leave an unmatchable contract behind. Such similarities are probably what will also strand Daniele De Rossi at his current club. I'd argue that his beard is worth more than any of our other central midfielders but this is the no fun transfer zone - all business all the time.

Even the summer's most important signing, Jose Mourinho, just doesn't feel right. It feels too comfortable, too easy, too normal. Jose went out to see other people for a while but we're cool with that because he's Jose and we want a re-run of our greatest hits. He's a bit soft around the edges now but we're cool with that because he's Jose and he smiles with a twinkle in his eye. He's got a happy-relationship belly going on and he seems married to his JM monogrammed track pants and training shirt but we're cool with that because he's Jose and what more could we possibly ask for. Jose's one of us. But we're well beyond the honeymoon and we'll have to figure out who does the dishes and the vacuuming and talk about how our day was (every day!) and deal with the fact the he chews his food loudly with an open mouth. And that's all before we even suffer our first defeat!

Adding extra worry beyond my superficialities - outside of Schwarzer, the other signings fall into the hazy gray quagmire between 'like' (i.e. the Salomon Kalou-zone) and dislike (i.e. the Fernando Torres-zone) - are what I think are legitimate footballing concerns.

Our most expensive signing adds extra depth to the area of least need in the squad. The areas of most need are getting reinforced by a pair of 20-year-olds (Van Ginkel and Lukaku). The defense, especially the central sort, is worrisome beyond a certain Brazilian Sideshow.

To make matters worse, the options to reinforce are dwindling fast and they were slim to begin with. Cavani and Falcao are gone. We missed out on Modric last year. The Roma pair of Marquinhos and De Rossi probably aren't happening for specific reasons. Fiddlesticks all around.

No, I'm not spoiled. Or perhaps I am; there goes another lawsuit. I don't care. Like Cyndi Lauper, I just want to have some fun.