Share All sharing options for: Previewing midweek senior internationals & the EURO Under-21 Championship

Chelsea angle: Nigeria were laughably bad versus 10-men Mexico so it's perhaps no surprise that the defending Africa Cup of Nations champions are struggling a bit in the qualifying group. While they are currently (tied for) first, they have won only one of their first three matches and Malawi are breathing down their necks. If you can name one player from Malawi right now (no cheating!), I will personally send you a postcard.

Kenneth Omeruo was one of the better players in Nigeria's defense versus Mexico - read Graham's report here - but he will be expected to show some improvement regardless. John Obi Mikel, the "midfield lubricator" has joined up with the squad as well, which should be a tremendous boost for the Super Eagles. Victor Moses unfortunately is still hampered by injury.

Chelsea angle: Beyond the obvious Michael Ballack connection (and potential for future back-room staff involvement), the big intrigue that you will hear about from this match is that Jose Mourinho has agreed to lead one side, while Bayer Leverkusen sports director Rudi Voller has agreed to lead the other side. Meanwhile, Andre Schurrle is expected to play and Voller himself has admitted that he will be having a conversation with Mourinho afterwards. Connect the dots.

UPDATE: Thanks to Aleks for finding us a teletext image from MDR with the squads. It's quite droolworthy, with the likes of Didier Drogba, Andrei Shevchenko, Ricardo Carvalho, Michael Essien, Pavel Nedved, and Dimitar Berbatov suiting up for the World XI. 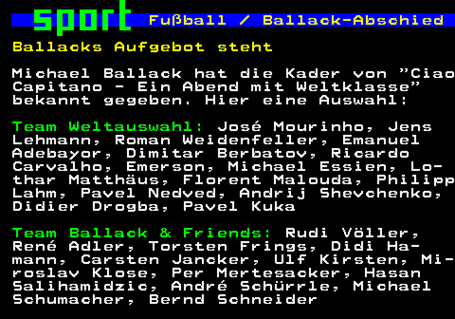 This is a biennial championship that runs in the summers between the senior European Championships and the World Cup. Spain are the defending champions (surprise!) - Juan Mata took home the best player award as well - and this year's edition takes place in Israel. The six other nations who qualified are England, Germany, Italy, Netherlands, Norway, and Russia, so there will be plenty of exciting talent on display.

With only eight teams in the mix, the tournament is over in less than a fortnight Two groups of four battle it out for a spot in the single-elimination semifinals. Group A starts on Wednesday while Group B kicks off on Thursday. All matches will be broadcast on the ESPN family of networks in the USA (and ESPN3 online) and on Sky Sports 2 in the UK (and Sky Go online).

Chelsea angle: Umm - Magnus Wolff Eikrem was a Football Manager legend once? - none.

Chelsea angle: Josh McEachran and Nathaniel Chalobah are both part of Stuart Pearce's squad. Chalobah is in fact the second youngest player at the tournament, after Netherlands' Tonny Vilhena. Chelsea fan Nathaniel Clyne (Southampton) is another one to keep an eye on.

Meanwhile, Italy have got to be one of the favorites, certainly in the group, with the likes of Marco Verratti (PSG), Lorenzo Insigne (Napoli), Alberto Paloschi (Chievo), and even ex-Chelsea boy Fabio Borini (Liverpool) on the squad.

Chelsea angle: Russia do have a couple exciting talents in attack, but the real draw here is of course Spain. With United's David De Gea in goal, all of Barcelona's Spanish super-talents (including Thiago Alcantara), plus the likes of Athletic Bilbao's Iker Muniain and Malaga's Isco, it's hard to see Spain not standing alone at the top once all the shouting is over.

Chelsea angle: With both squads loaded, whichever of these two end up progressing from Group B alongside Spain may just meet them again in the final. Especially if it's the Netherlands. Chelsea's own Patrick van Aanholt, Chelsea target Marco van Ginkel, potentially intriguing Kevin Strootman, and Europa League runner-up Ola John are among the many talents the Dutch can call on.

On the other side, goalkeeper Bernd Leno - who once made an extraordinary Champions League debut against Chelsea - anchors a Germany team that also has Tottenham's Lewis Holtby and Bayern's exciting 19-year-old Emre Can.