Now that the best is back, it seems that nothing but Chelsea's best will do.

Share All sharing options for: Expectations for 2013/14 - The Results

Over the weekend, firm in the knowledge that Mouclear War was nigh, over 1500 of you participated in a poll regarding expectations for the 2013/14 season. This is how you voted.

On a side note, if we do something like this again, please be sure to follow instructions, even if the choice of scale does not fit your personal belief system - unless truly 18% of you think that the Premier League should be our lowest priority! Also, "max points behind" implies a) a number (not "first place" or "best boss" or "S") and b) not total points for the season (95 points behind first place might be historic but also unbelievably tragic).

The first question was how many points behind the eventual leaders would you be happy with Chelsea finishing. Zero or anything below zero meant the title - and I'm assuming getting Aguero'd would not count.

Ignoring non-numeric answers and anything above, oh let's say, 30, here's the breakdown: 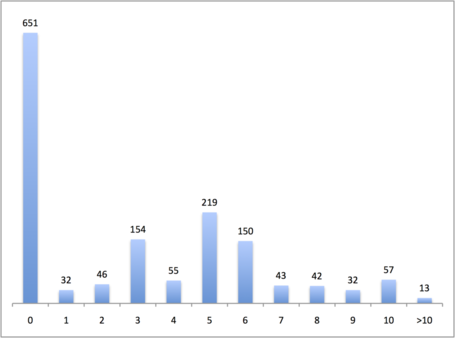 A two-thirds majority would only be satisfied with victory, while the priorities are all over the shop. Still, with 29%, the "least important (1)" priority carries the relative majority: 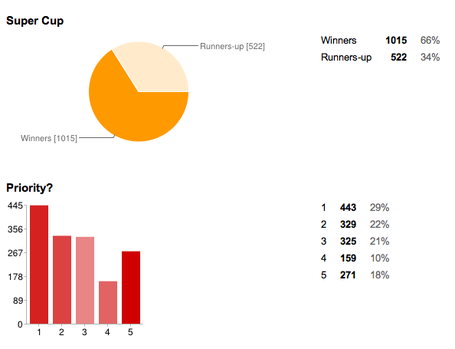 Looks like it's got clear second place on the priority list, while over half of you would like to see Chelsea get to at least the semifinals. Despite failure last season, this is actually not an outrageous expectation, with Chelsea having reached the semifinals six out of the first nine years of the Abramovich Era. 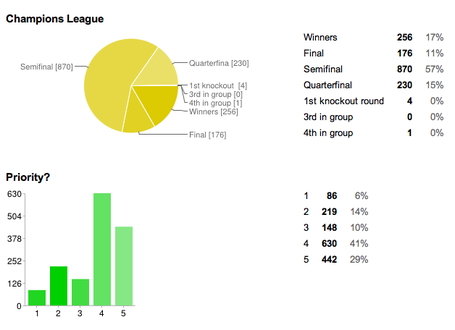 Kudos to you, Mr. One Person who'd be satisfied with literally any result, even finishing 4th in the group stages.

Although priority-wise it seems to edge out the Super Cup, as far as actual results go, the League Cup looks like the one where early failure might be most acceptable. I'm not sure I'm quite able to wrap my head around that combination at the moment. 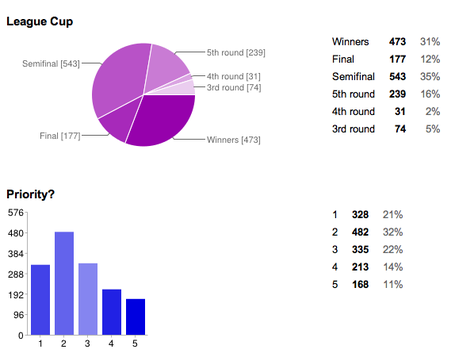 Still the king of all cup competitions and over half of you would expect nothing less than for the Chelsea Cup to come back home to Chelsea as well. 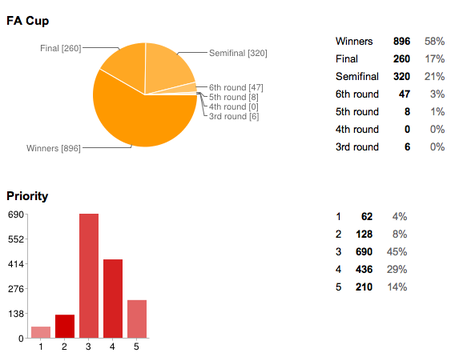 So, if we put this all together, the Democracy of WAGNH speaks thusly:

That, my friends, would be quite the season. The best Chelsea season ever, no less.