* This one is explainable: that silly penguin's back today.

We're now up 75 different names linked directly, indirectly, or wishfully with Chelsea, and that's without including any of the WAGNHSSS posts. Here's the current Top 16, all of whom have had at least a couple mentions: 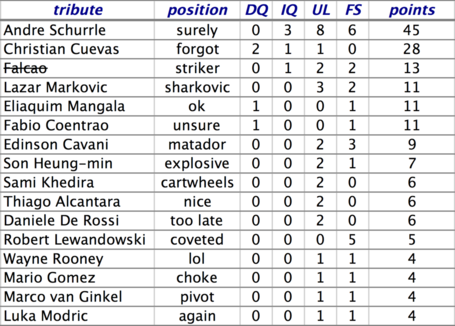 Andre Schurrle has comfortably maintained his position at the top and has opened up a nice lead on both Cuevas and Falcao, probably neither of whom will be adding to their tally anytime soon on account of having pretty much wrapped up their personal transfer sagas.

Unfortunately for Schurrle, his own transfer may have hit a snag as well - or, then again, it may just be the first act of many more twists and turns to follow. But for now, unless somebody in the chase pack steps up their game - I'm looking at you lot, Messrs. Edinson Cavani, Sami Khedira, and Thiago Alcantara - Schurrle's lead looks good for the money.