Schürrle is now in the clubhouse, kicking his feet up and watching the rest of the mayhem unfold.

We must hurry. Tancredi is oiling up the Twitter megaphone and the rumors will start anew in just a couple hours!

Before then, let's check out the latest standings of the WAGNH transfer rumor league after four weeks of silly season action: 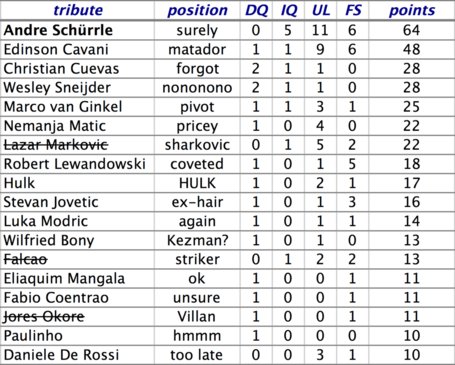 Perhaps unsurprisingly for an early season capture, Andre Schürrle enters the clubhouse with a relatively low 64 points. Not making a single direct statement (prior to official Chelsea confirmation of the transfer) really hurt the 22-year-olds point total. A rookie mistake, to be sure. The 64 is lower than any of last summer's Big 4 of Moses, Azpilicueta, Oscar, and Hazard. Hopefully Andre can use the huge disappointment of whenever his total gets eclipsed - CRISIS! - to spur himself on to making a big impact during the season.

Right now it's Edinson Cavani looking the most likely to pose a serious challenge to the German wing-forward. Horrible performance versus Spain aside, the Cavani rumors had been flying left, right, up, down, and all around recently. He's even got his whole family helping with interviews and phone calls to radio stations! Cheater.

The talkative Wesley Sneijder jumps into fourth place this week, while Nemanja Matic, Hulk, and Paulinho make the jump into the double-digit point totals.