Despite dropping two points at home to Spurs, Chelsea are still in with a good chance of winning the Top Seven League.

Share All sharing options for: Chelsea's results against the Premier League's best only serve to underline the failed promise of this season

Without a doubt, the seven best teams in this year's edition of the Barclays Premier League have been the red and blue halves of Manchester and Liverpool as well as the three big teams in London. Here's how they've fared against each other so far, with just the one final day matchup of Chelsea vs. Everton left to go. 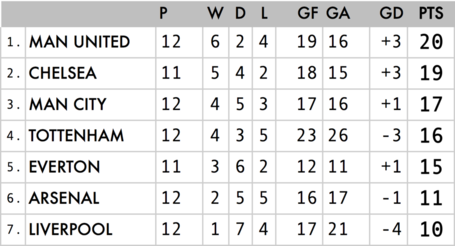 Had Chelsea managed to hang onto the lead on Wednesday - granted, hanging onto leads is as big of an if as it gets for this team and its interim manager - they would've sealed not only Champions League qualification, but would've assured themselves top spot in the Top Seven League as well. Now because the Premier League isn't run like a few of the smaller leagues (e.g.: Belgium), this is purely an academic exercise. But if there were a title playoff split of the top teams towards the end of the season, it is not unreasonable to think that Chelsea could be the ones celebrating rather than any of the others.

Alas, the title rests with Manchester United and by no small margin either. 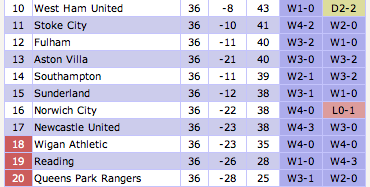 And here are Chelsea's: 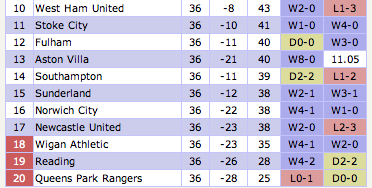 Blergh. Please note the monotony of blueness in the first and the cacophony of colors in the second. That last row truly just wants to make you tear at your eyeballs.

Only one of these disappointing results is on Roberto Di Matteo (the 0-0 draw away to Queens Park Rangers). The rest have all come in the era of the Interim Rafalución.

Playing up and (especially) down to the level of your opposition? A classic sign of bad management as far as I'm concerned.