A Mourinho update, because we haven't had many lately...

If it were anyone else in the world, I'd be sick of this saga already. As it is, it's Mourinho, so let's talk about him a bit more

Share All sharing options for: A Mourinho update, because we haven't had many lately...

A few months ago in the aftermath of Manchester United's exit from the Champions League at the hands of Jose Mourinho's Real Madrid, I tweeted something about Mourinho's famous post-match declaration -"the better team lost" - pointing out that the statement was probably designed by the Portuguese to butter up a media that hangs off his every word.

Now I'm going to fall into that exact trap and analyse Mourinho's latest veiled comments to the media. We all know he's more or less off in the summer - if Florentino Perez doesn't sack him, Mourinho will walk. His public barbs at Real players, his *poignant* post-match interview after the Borussia Dortmund tie and the general demeanor he's displayed in the past few months all point to one conclusion.

"It's very easy to analyse what Pepe said. His problem has a name: Raphael Varane."

And the ones Stephen posted yesterday:

"With me Diego Lopez will always be ahead of Casillas. He's better"

"What should I have done differently in last 3 years? Signing Diego Lopez a year ago."

Ah, Mourinho, up to his old tricks again. His frequent, alienating quotes are a very good way of putting down some of the players he's clearly not been happy with throughout his regime - his dispute with Casillas has been ongoing for several months now. If I were a psychologist, I'd be saying this is Mourinho's way of distancing himself from the players, and in effect distancing himself with the failures of his time in Madrid. By creating scapegoats, he creates the image - true or not - that he is not to blame for Madrid's under-performance (if you can call it that), which will only encourage the fans that adore him at Stamford Bridge to continue seeing him as the all-conquering, magnificent manager that we remember him to be.

This attempt at narrative manipulation is even more obvious when you consider his comments on Barcelona.

"Barcelona is the best team in the world over the last 20-30 years, and that makes what we've done even more valuable."

Huh? Mourinho praising Barcelona? It's like he's trying to exlempify the achievements of Guardiola's Barcelona to make his own successes seem more impressive by comparison. Again, a subtle but effective way of controlling the way his inevitable exit from Spain is depicted - not as a inglorious departure, but a scenario in which it has been those around him that have failed, and not Mourinho himself. His rather bizarre 'facts' press conference - in which he produced a list of his trophies and compared them to former Madrid managers - is another example.

Using the media to his advantage is something we're used to from Mourinho, and although I think we're all very guilty of reading too much into, I do think there is something to be said about the way he is going about the final few weeks of the season.

Meanwhile, John Terry's piped up with an interesting revelation.

"He's still 'The Special One'", Terry told Spanish newspaper Marca. "We send each other text messages and often wish each other good luck. He's interested in our results and everything that happens at the club. He's not only in contact with me but also with (Frank) Lampard and other players.

I don't even need to make jokes about this one - David's already got you covered (from a few months back).

And if you're still not convinced Mourinho's going anywhere, then just check out this tell-all picture. 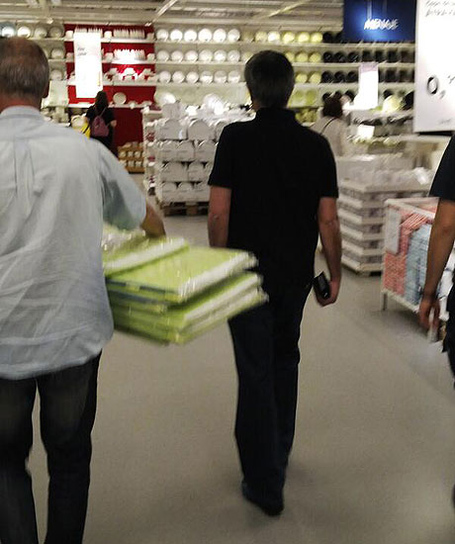 Seriously, these quotes, from The Telegraph, are just brilliant.

A sighting of the Portuguese coach in a Madrid branch of Ikea has increased speculation that he is readying himself to leave Spain. Spanish TV programme Punto Pelota released the photo of Mourinho in the Swedish furniture shop, detailing his "serious" demeanour and big spend on "boxes and masking tape" while accompanied by a "bald man".

Yes, because the only reason you ever shop at Ikea is because you're moving to London. The bald man is just a dead giveaway.