Analyzing the goal against Man United

Share All sharing options for: Analyzing the goal against Man United

Ramires is fundamentally a player who thrives on transitions. His tireless work rate off the ball, his ability to tackle and his explosive speed make him a real threat in counter attacks. This is not new to us. And it is of no particular surprise to find him in the thick of this vital game-winning goal against Manchester United which was built on a quick break from the Chelsea's half.

But first, let's back up a bit.

Chelsea played this game with Frank Lampard and Ramires in the double pivot of the usual 4-2-3-1 formation. They took turns going forward from their deep position through out the game and it followed a pattern. When the team was attacking through possession play, Lampard was the one who joined the attack. Ramires went forward mainly on the counters. Here's a look at Oscar's chance from the first half. 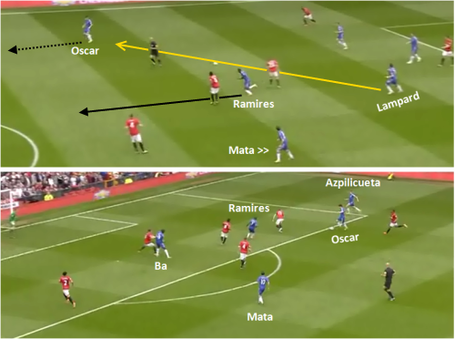 After intercepting a pass from United, Oscar quickly moved down the right wing and Lampard would find the Brazilian with an uncomplicated pass. Ramires was almost level with Lampard when this attack began but, as you can see in frame 2, he ended up alongside Demba Ba in the box by the time Oscar took a smart shot at United goal.

[Side note: The difference between Ramires and Lampard is not simply that one joins the counter-attack and another doesn't. After all, Lampard has made a name for himself with his forward runs. But while you expect Lampard to make a late run and position himself near the edge of the box, somewhere near Mata and Howard Webb in the picture, Ramires offers himself as an option at the very tip of the attack.] 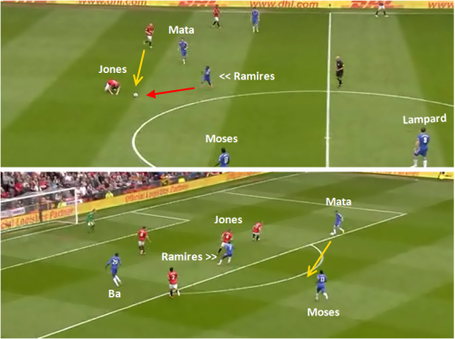 We see Ramires doing the same thing in another chance in the first half. This time, the Brazilian pounced on a slip from Phil Jones* to begin the counter attack. Again, when Juan Mata cut the ball back for Victor Moses to aim for the sky, Ramires had made it into the opposition's box.

Consider that was my super long-winded intro and now let's talk about the build up to the goal, which began with a vital challenge from Ramires. A long ball from Johnny Evans sent the ball into Chelsea's half. After the two sides played a short game of hot potato with the ball, substitute Wayne Rooney was in possession 20 yards out from the Chelsea goal. This was when Ramires picked the England striker's pocket. Like this:

Rooney believed he was fouled but clearly the striker tripped himself when tangling with Ramires's standing foot and the ball was pretty much in the Brazilian's possession. From here, Lampard would carry the ball forward while Ramires sprint past his midfield partner like a kid chasing an ice cream truck. 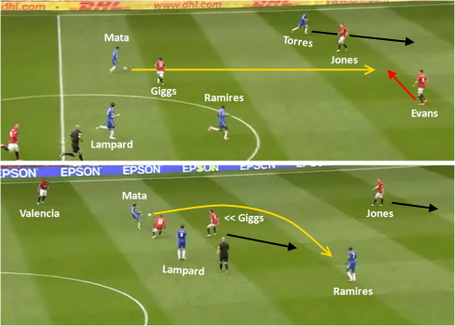 When Mata received the ball from Lampard near the halfway line, the Spaniard quickly tried to release it to Fernando Torres, who had come on for Victor Moses (much to Tony Gale's delight) and played on the flank (much to Tony Gale's disappointment). Mata's pass was intercepted by Johnny Evans, which fits the overall pattern of the game: Chelsea's attack breaking down repeatedly in the final third.

Mata, however, would get another shot when Ryan "We Don't Do That Here" Giggs mis-controlled the ball. With Jones filling in for the out of position Rafael* at right back and tracking Torres, Chelsea had an extra man in midfield: Ramires. Mata lobbed the ball over Giggs, just for fun and because he can, to the unmarked Ramires, and then dashed forward into the box from the left wing. Here was where the vital mistake occurred from United's perspective. There were three United players around Mata at this point but no one tracked his run when the ball left his feet. Jones had Torres to mind; Giggs shifted his attention rightly to Ramires. But neither Rooney nor Antonio Valencia bothered to followed the Chelsea number 10 into the box. Gracias, amigos! 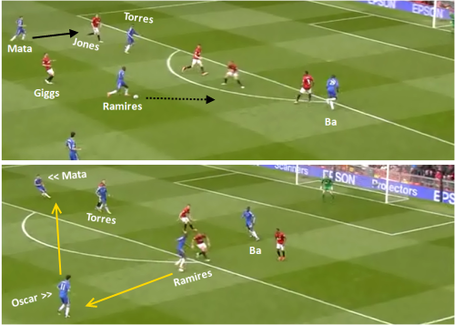 And this is pretty self explanatory. Ramires dribbled toward the United back four, two of whom were occupied by Chelsea strikers. He then made a back-heel pass, because he's Brazilian and Brazilians do back-heel passes, to Oscar, who found Mata salivating and rubbing his little belly on the back post. (Click here for the GIF of the goal.)

So on a day that Chelsea struggled to find the break through against a lackluster Manchester United, Ramires's physicality, speed and energy play a crucial role in setting up this counter-attacking goal.