My Summer Shopping Spree won’t be about current Chelsea loanees or summary of current squad, as others already covered this area pretty thoroughly. Instead, I'm going to explain my ideas behind the transfers and how my ideal Chelsea squad should look like for next season.

My objective is to rebuild Chelsea into young, hungry team that is able to execute variety of formations and also different game plans. Final squad should be suitable mainly for 4-2-3-1 (both with attacking wingers and defensively responsible ones to choose from), 4-3-3 as formation against strong opponents and 4-2-2-2 when chasing the game or when comfortable in possession.

It means good-bye for Fernando Torres, Marko Marin, Michael Essien and plenty of youngsters - Jeffrey Bruma, Gael Kakuta, Oriol Romeu and even Lucas Piazon. I inserted clauses regarding future transfer of any of these youngsters, as appropriate percentage from transfer fee will be mine. Also buy-back clause in Piazon’s deal can be activated in next two summer transfer windows.

The most ideal situation is world-class number one, reliable number two and homegrown backup keeper in case of injury calamity.

Petr Cech will stay as number one for at least next two seasons, but with Hilario and Ross Turnbull gone, I need to find goalkeeper to cover for Czech international. Someone, who is reliable, who can claim crosses, is composed on the ball and is able to make a decent save. Not world-class, not game changing saves, just solid goalkeeper. I find Diego Lopéz as ideal candidate for role of second goalkeeper and I believe he is keen to continue with José Mourinho. Deal valued at 5 millions should be enough to convince Real Madrid. I'm gonna trust Jamal Blackman with number three role and he may even get some Capital Cup games. 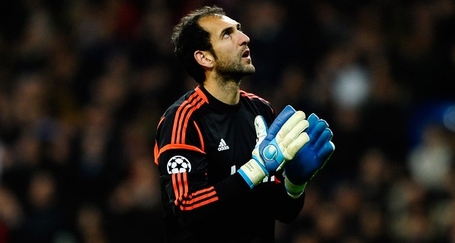 I thank previous board for buying Cesar Azpilicueta as they solved right back position for many years to come. Now I need to do the same with left back position, as Ryan Bertrand will always be just solid backup. Patrick van Aanholt has impressed me in Vitesse, but adding Luke Shaw - the huge British talent - is more than tempting. He is very solid defender and just 17-years old. I hope to make a deal with Southampton and I'm ready to splash rumoured Ł10 million. 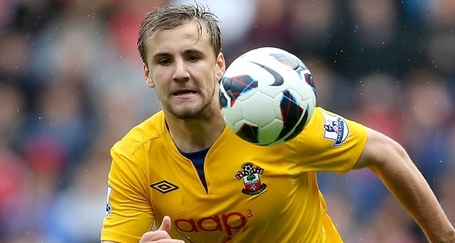 Center of the defence is much more complex area to deal with. I find world-class only David Luiz. The rest - Gary Cahill, John Terry and Branislav Ivanovic - can have solid games, particularly with Luiz alongside them, but I never ever want to see Cahill-Ivanovic or similar partnership again.

The new central defender should be capable to partner David Luiz against topsides, but also be significant improvement in case of David Luiz's ban, injury or required rotation. Moreover, it needs to be someone, who is able to execute high line. My target is always impressive Neven Subotič from Borussia Dortmund. He is strong defender with decent pace, range of passes and experience. He is also very good talker.

I have considered cheaper Kyriakos Papadopoulos, but his long-term injury discouraged me from this deal. Marquinhos was another target, but I find him not ready for starting position just yet (and I believe Andreas Christensen will be as good as him in near future anyway). I tried to bring Raphael Varane, but that deal just wasn't possible to conclude. And finally, after Porto sold James and Moutinho I didn't even tried to call them about Mangala. Moreover, I find him untested after untroubled domestic campaign, no NT start or big game in Champions League under his belt. 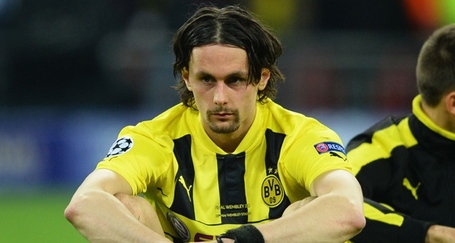 Neven Subotič it is. His price is as much as Ł30 millions. Both Subotič and David Luiz are still young and will command starting place for next few years. Experienced Gary Cahill and John Terry are their immediate cover. On contrary, Andres Christensen, Kenneth Omeruo and possibly Nathaniel Chalobah are already in line of succession for the future.

Let's briefly describe my ideal structure of midfield. Basically, I want to have three world-class central midfielders, who can partner each other in 4-2-3-1 double pivot, but also be suitable for other formations. This trio would be complemented with two other capable midfielders – either experienced or very young ones.

Right now, neither of Chelsea's midfielders is top class, but there are some decent ones. Ramires is world-class with his own sense and he is ideal 12th player of my team (as he covers variety of position), so he takes one of the spots. I will trust Obi Mikel with second spot and hopefully he will convert into beast midfielder by the end of the campaign. It leaves one spot available.

Rather than invest into several decent players, I will splash massive cash for world-class player who will be huge improvement over current squad. I'm looking for someone who can play as defensive midfielder but also alongside defensive John Obi Mikel.

Alex Witsel is my guy. He is not only good tackler, passer and strong lad, but also very intelligent player. You command him to patiently stay back and break opposition runs and he will do exactly that. You command him to occasionally run forward or play as advanced midfielder and he will know what to do. So exactly the player I am looking for. I believe he can be lured into Stamford Bridge for around Ł35 millions as Belgian contingent is awaiting him. 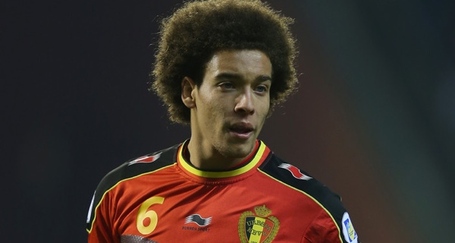 Frank Lampard is the first option behind this trio. The second spot is open for battle, as I have already sold Oriol Romeu.

Who’s gonna be the last piece of puzzle? I was ready to jump onto Marco van Ginkel ship, but I will be ready to fully judge him after U21 tournament in Israel (I just saw the game against Twente and he did not convince me there). As I'm operation on tiny budget here (give or take Ł10m), I can't move neither for Thiago Alcantara or Lars Bender. I was ready to hand this place to Nathaniel Chalobah after impressive performances in Watford, but he struggled in play-off games.

So, this place stays open, as I will decide after the U21 tournament. At the moment Chalobah is having the nod ahead other targets (presumably van Ginkel). He can influence game in the middle of park, screen the defensive line, but also cover in both centre back and right back positions.

Last summer I was very keen to add one more winger with André Schürrle being my preferred choice. I will finally bring him to Stamford Bridge as there are four reasons why I want to do this 20 million deal so badly.

1. Schürrle can operate as pure left-winger and the squad will benefit from his solid defensive play and work-rate while being direct offensive threat.
2. André is utterly perfect player for 4-2-2-2 formation and final missing piece preventing its regular execution.
3. He is also very dangerous player without the ball as he is constantly running into spaces. That's exactly the skill I'm looking for, as Mata, Hazard or Oscar can combine and Schürrle meanwhile will cause havoc on the other side of the pitch.
4. Finally, he is still very raw. I would immediately put him on physical training to gain more strength and also to work on his finishing touch. With other skills already in place, I could see him bully defenders like Gareth Bale does. 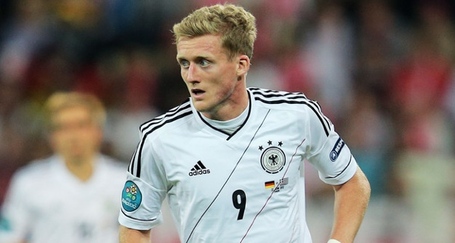 Here it's very simple, as I believe three forwards would be enough. Romelu Lukaku and Demba Ba are already in place, both very strong and good in the penalty area. The third option should be complete forward, who can link-up with midfielders, win aerial duels, finish the moves and last but not least is tactically mature. Robert Lewandowski strikes me as only candidate, but ideal man to complement Lukaku and Demba Ba. I have probably enough cash to buy him, but with one year left on his contract, I believe Dortmund will settle for 30 millions pound. 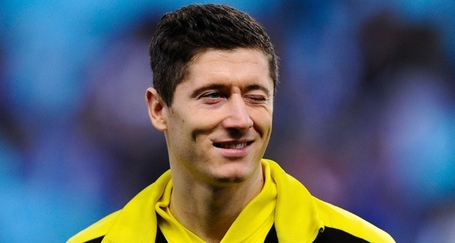 I’ve already spent £130 million, but Ł10 more is still remaining. I probably will give Chalobah nod ahead of van Ginkel, so it can be spend wisely on youngster. I think player in similar mould to Jack Wilshere would lift the squad up. That’s why Olivier Torres from Atletico Madrid is my main target and I will use Thibault Courtois loan as leverage against them. Hopefully, I can have him for remaining Ł10 millions and immediately send him on loan.

1. This squad gives us very balanced team and ideal structure for next few years. In nearly every line, there are 1 or 2 experienced players, 2 or 3 players in their prime and plenty of young but key players 22 to 25 years old. Moreover, players like Courtois, De Bruyne, Omeruo, Shaw are nearly ready to jump into first team.
2. To extend first point, it means we don’t need to spend big in the future rather just buy 1-2 ideal candidates who immediately or in the future improve the team.
3. With Subotič, Axel Witsel, Lukaku and André Schürrle I added strength and height into the team. It allows us to play very strong physical line-up or very technical one.
4. If we win title, I would probably use it as big good-bye party for old guard (Cole, Lampard and Terry) with Chalobah, Shaw and De Bruyne already in place to fully replace them and to make room for 1-2 new signing in next summer.
5. Next summer I see two areas, which need possible refreshments. If Obi Mikel becomes beast midfielder, I would definitely keep him, otherwise replacing him with Nemanja Matič comes into consideration. Same apply on Gary Cahill with scouts watching Mangala in big games. 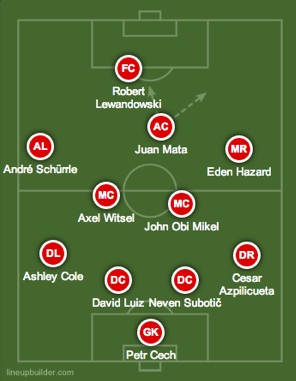 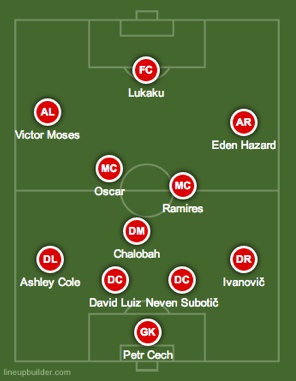 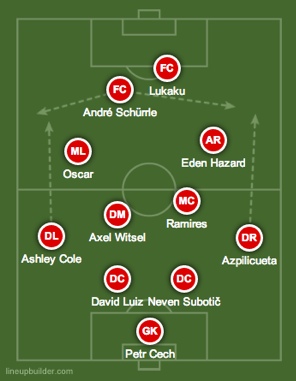 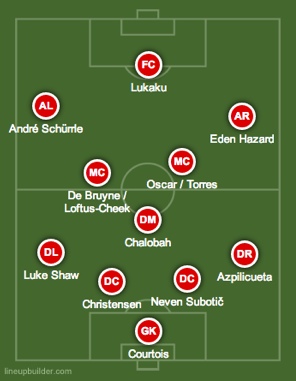