Next year chelsea should be a genuine title contenders, to improve the odds of winning the title this teams midfield and striker department should be improved.

lets start with the transfer

-Fellaini-23m
-De Rossi-10m
Fellaini and De Rossi will be our own martinez-schweinsteiger partnership in the pivot. In the bayern vs barca match schweinsteiger was playing deep to move the ball from back whereas martinez was roaming the midfield, in our case De rossi can play schweinsteiger role similar to the role he played in Italy vs Spain in Euro 12
According to report Fellaini has 23m release clause and if we can get De rossi for 10mil chelsea can dominate the game by Fellaini -De Rossi partnership

-Lewendowski-30m- (else cavani 50m)- Lewandowski can be a great player for us. If chelsea manage to sign Lewandowski for 30 mil it will be great else chelsea should go all out and sign cavani for 50mil

What do you think of my Fellaini-De Rossi partnership in pivot, can it be our own Schweinsteiger-Martinez ? 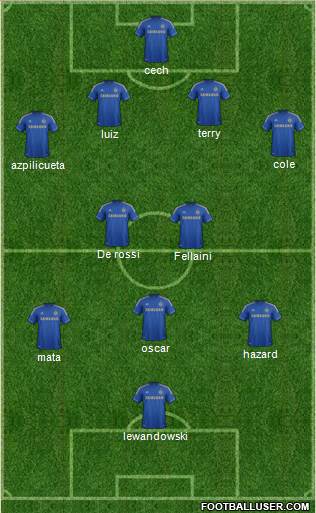 What do you think of my De Rossi-Fellaini partnership in pivot, can it be our own Schweinsteiger-Martinez ?