In the last few years I’ve watched Chelsea add a lot of exciting attacking talent to the side. Mata, Hazard, Oscar, Torres (lol), but I’ve also watched the defensive stalwarts depart. Ballack is gone with no replacement. Essien is not the Bison of old, Carvalho is gone, Mikel has never truly stepped into Maka’s shoes. Cole and Terry have declined and yet our replacements for these players has been the likes of Miereles and Cahill. It’s time to fix the defense.

I don't want Cech to leave, I think his presence has been the backbone of our defensive stability since Terry's decline and that we're in for a few shaky months when Courtois comes in. That being said, Luiz, Cole and Ivanovic should offer the defensive leadership we need, and I had to sell Cech to account for the Schurrle signing that seems sure to happen. Fabianski I think can be a fantastic #2. He looked quite good in the few games he got this year, and stopped Bayern Munich from scoring. Besides, Szczesny is a dick and I like Fabianski, let's get the kid some trophies. Blackman covers the third spot.

I wanted some depth in case Ivanovic had to play a lot of CB and Azpilicueta needed a breather. Kalas is quite good and while he could probably do with another year on loan, I think he can do the job well enough. We're going to try to give him quite a few games.

Gary Cahill isn't quite good enough for me to want him starting every week for Chelsea. He is good enough to start for nearly every non-elite club in the world. Spurs can use the cash to strengthen elsewhere and as hard as Levy is to get to sell, this is a really good deal for him. Vertonghen provides emergency depth at left back, is a goal scoring threat and should really help steady the back 4. I love watching him play and he's too good for Spurs.

I wanted to have the final say in where Luke Shaw goes on loan so I'm sending PvA there so Shaw doesn't need to return to Southhampton.

Essentially I'm replacing two players who didn't play at all last season with one who will! Bender is fantastic and will add some much needed steel to this team. This will also allow me to possibly push Mikel forward to something more comparable to his role for Nigeria. We'll get you that goal yet Mikel!

We're switching to a 4-3-3 / 4-3-2-1 as the primary formation, but I wanted Chelsea to have some options in the pivot for the 4-2-3-1 as well. Van Ginkel is a project but Thiago should add something to our midfield, and Bender allows us to build a really tactically sound side. I'm going to keep Van Ginkel around for a year because I want him to train with Lampard and I think he can get some minutes. Let him learn from the best.

We're effectively losing 1 player in Moses for an upgrade in Schurrle and hopefully gaining KDB. We'll also need less depth here as the primary formation will only involve two wide players. If we have to lose KDB for a season it's still manageable, but I'd prefer the Pink Mamba make the squad.

I'm resigned to the fact that no one is taking Torres. If we can get his wages off the book, terrific but we can pay 10 million a season for Kalou if we have to. Thanks Uncle Roman! Cavani is our first option with Lukaku being a sub and getting most of the lower priority games. There can be a lot of healthy rotation here with Lukaku and Cavani relieving each other as Torres mops up in the Carling Cup type games and we marvel at his goal per minutes record. You show Brighton what's what Nando! 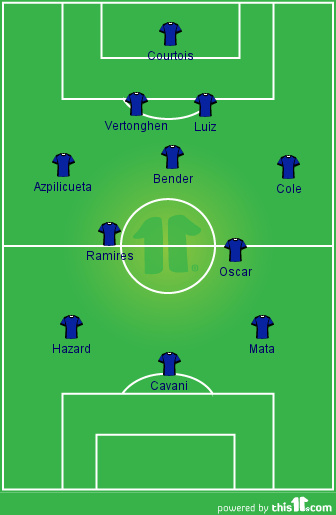 Breaking down the Bus 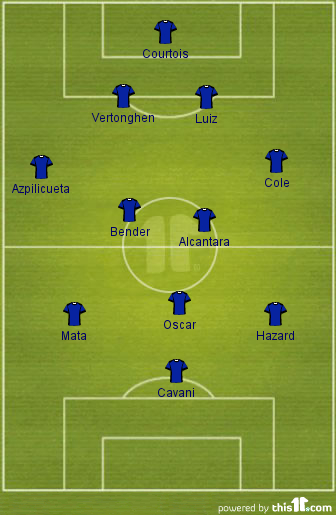 We should really win this without trying too hard. Let's sit every starter barring Courtois. 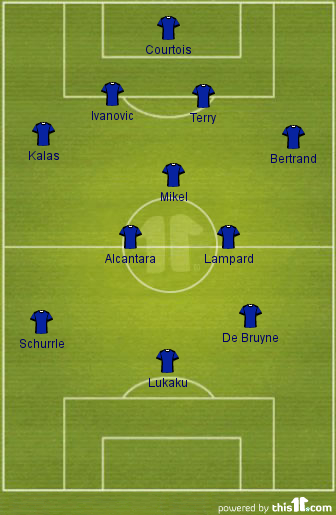 Note: If Kevin De Bruyne has to leave to get Schurrle, that frees an international spot that I would give to Patrick Van Aanholt and I would loan out Kalas to Southhampton instead.

All in all, we've given Luiz a partner for the next several years, boosted our prospects at left back, and strengthened our defensive midfield. Our strike force is 10x better than last year and we've solidified the midfield with a lot of versatile young players. What do you think?