Sparta Prague, Steaua Bucharest, Rubin Kazan and Basel doesn't quite have the same ring to it as Napoli, Benfica, Barcelona and Bayern Munich but nevertheless Chelsea are through to their second consecutive European final after a 3-1 win (5-2 on aggregate) over the Swiss champions.

Rafa Benitez went with a reasonable starting XI (considering Chelsea's upcoming commitments in the EPL) featuring Gary Cahill partnering Branislav Ivanovic at the back, and Ryan Bertrand filling in for the suspended Ashley Cole. Eden Hazard reprised his central attacking role from the first leg with Victor Moses and Ramires playing out wide in support of Fernando Torres. In the centre, Benitez chose to keep with the midfield duo of David Luiz and Frank Lampard that played the majority of Sunday's clash with Swansea.

Meanwhile, Murat Yakin was forced into three changes, with Gaston Sauro, Markus Steinhöfer and Kay Voser all coming into the back four. Otherwise, it was the same side that started the first leg. The crucial difference was with the intensity of which Basel pressed in the opening ten minutes. They swarmed around Chelsea players like bees, keen to win the ball back quickly, and Geoffrey Die's highly enthusiastic challenge on Ryan Bertrand summed up Basel's approach. Inexplicably, the wonderfully named Die avoided a booking, but the tone was set for a high-tempo opening.

The first chance of the game came directly as a consequence of this pressure. Cesar Azpilicueta was forced into a silly, hopeful pass across the face of his own goal - Ivanovic had no option to head it clear, but it fell directly to a Basel player who promptly headed the ball back towards Marco Streller, whose volley was fired just wide.

The next chance of the game, another volley, came a little closer, bouncing off the post. Lampard, captain for the night in the absence of John Terry, had made a clever run in advance of Torres, who played a cute pass over the top for the midfielder. Alas, his shot rebounded off the woodwork, denying the 39,403 Chelsea fans in attendance the opportunity to witness a landmark moment, seeing as that goal would have drawn Lampard level with Bobby Tambling.

Unfortunately, that clever chipped ball from Torres seemed to drain him of his ability to play football, the Spanish striker flitting between terrible and terrific in equal measure. As the chalkboard below shows, he was particularly keen to drift out into the left channel, and then cut inside towards goal, and on seventeen minutes, he drew a save from Yann Sommer with a weak shot from the edge of the area. His next effort wasn't quite so close - instead, the shot sliced all the way out for a Basel throw-in. Oops, Fernando. 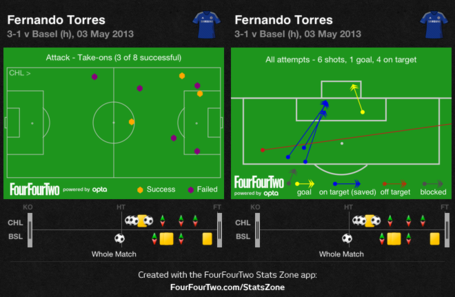 Unfortunately, he was also prone to some cheap giveaways of possession, and his sloppy passing was costing Chelsea on the counter-attack. Fortunately, Eden Hazard was there to pick up the pieces, and the Belgian magician was on hand to thrill the crowd with some wonderfully inventive dribbles down the centre.

Meanwhile, Basel were going for it - only natural, as one goal wasn't going to be enough to qualify for the final. They pushed the fullbacks high up the pitch, leaving Fabian Frei and El Nenny to marshall the space in front of the two centre-backs. That tended to leave a bit of space down the sides for Moses and Ramires to counter-attack into, but Chelsea's transitions weren't quite in top gear.

Instead, it was the away side who had the next best chance of the game. On the twenty-five minute mark, Streller smacked a volley across goal, the ball fizzing just beyond Petr Cech's far post. It was as pure as a strike as you'll ever see, and I wouldn't have been too angry had it gone in - it was a marvellous piece of technique, and had it been on target, it would have been near unstoppable.

But there was definitely reason to be angry about Basel's next few chances. For reasons unknown to most, Chelsea's defence decided to play on a completely different planet to the rest of the team - suddenly unable to hold an offside line, and not helped at all by the fact the two central midfielders seemed to have no clue what their roles were defensively.

You'd hope they weren't in charge of making sure Basel could thread passes through the centre of the pitch, because that's exactly what happened when Salah ended up one-on-one with Cech. The goalkeeper won out in this scenario, but couldn't do anything about the Egyptian's next effort, which curled neatly into the back of the net.

By this point, Chelsea should have been ahead - some marvellously intricate control from Hazard near the byline saw him back heel the ball towards Victor Moses, who fired a low cross into the path of Ramires. The Brazilian conspired to send his shot straight into the hands of Sommer - somehow capable of chipping Victor Valdes in the Nou Camp, but unable to deal with a simple finish in front of goal.

Anyway, Salah's strike was the last action of the first half. No one was comfortable with Chelsea's progression only ensured by the virtue of two away goals - if Basel had scored the next, they'd be the ones heading to Amsterdam.

But one should never fear when Hazard is in the mood. His brilliant manoeuvring away from two Basel midfielders freed up Lampard for a long range shot, which Sommer could only parry away into the feet of Torres. The Spanish striker made no mistake with the finish, clipping the ball over the goalkeeper's desperate dive and restoring Chelsea's aggregate advantage. It was a far better moment for the much maligned striker, and restored our faith in the magical powers of the mask.

Five minutes later, he was at the heart of Chelsea's next goal, although the quality of his shot left much to be desired. Fortunately, the rebound fell kindly for Moses twice in a row - his first shot was blocked but he made no mistake with the second chance, coolly placing the ball into the far corner. Like Torres, the Nigerian seems to quite enjoy Thursday nights - that was his fourth goal in the Europa League, although it wasn't quite as spectacular as some of his other efforts.

It certainly wasn't as spectacular as what was to come. I'm not particularly keen on David Luiz in midfield, but the Brazilian really has come into his own under Rafa Benitez. This was just the latest in a series of magnificent goals - full of pace, power and precision. Perfect.

I could have watched a replay of that for the rest of the game, but unfortunately there was still half an hour of the match left to play. With the scores 5-2 on aggregate, Chelsea were firmly in control, and Benitez's focus became to ensure that the players under risk of suspension would be withdrawn. Ramires was the first to go, replaced by compatriot Oscar, and then later Hazard made way for Juan Mata.

There wasn't really any point to this second substitution, other than to preserve Hazard for Sunday's clash against Manchester United. Mind you, risking Mata wasn't really necessary - although the Spaniard will have had more strenuous outings walking the dog.

To give credit to Basel though, they did have a few more chances to get back in the game, with Fabian Frei crashing a shot into the upright, and Die - somehow still on the pitch despite his early aggression - forcing a save from Cech. Substitute Diaz also came close, his deflected shot just turned around the post by the alert Cech.

But in all honesty, the most entertaining moment of the final thirty minutes came at a Basel corner.

The Basel fans weren't so immediately amused, so instead decided to entertain themselves by throwing a couple of flares around the stands, which saw Stamford Bridge suddenly consumed by a coat of cloud. This did little to dampen the atmosphere, with the majority of the crowd preferring to cheer for Roberto Di Matteo and the impending return of Jose Mourinho.

With ten minutes to go, David Luiz, the darling of the Bridge, was withdrawn for his partner-in-dreadlocks, Nathan Ake, thus ensuring that both Ramires and Luiz would be right to face their former club, Benfica, in the final. The Portuguese side had also been bumped into Europa after failing to qualify through their Champions League group - an appearance in Amsterdam is certainly a downgrade on expectations for last year's Champions League quarter finalists, but it should make for a thrilling spectacle. Chelsea had done the job here with their flurry of goals after the break, and attention now turns to crucial Premier League games against Manchester United and Tottenham Hotspur.