Right, £100 million - a huge amount of money, to say the least. Where to start? I think to achieve the best possible squad, we should start by getting that £100 million to an even higher sum, by selling a select few of our players - this clears the way for more quality players to come in as well. So, who to let go? There are many players coming to the end of their contracts at Chelsea in the present day, so we can imagine they are on the way out. These players are most likely to be;

Let's assume these players all leave, which brings our first team squad down to 20, including Christensen, Loftus-Cheek, and Ake - none of which are properly ready for first team football. From our squad there are only a handful of players I can see being sold for decent cash that we can afford to let go - Defensive wise I don't see anyone leaving; there'll be some interest for the ever-improving David Luiz, but I'm sure he'll stay put. In the midfield, I believe;

Marko Marin will be on the way out - he just hasn't performed at all in his first year at the club. So how much will we get for him? He is still young, and has plenty of potential, so I could see around £4 million coming in for him, taking our Budget to £104 million - hooray!

The rest of the midfield will stay with us, I'm sure. Moving on to the strikers, I think that at one of our two strikers currently at the club will leave, and I think that will be Demba Ba, to be honest. Torres now has a connection with the club, the fans are coming round to him, he's had a decent season goal-scoring wise, and he plays quite good football, goals aside. Ba never really took off at Chelsea, he never lived up to the standard he was at Newcastle, he's quite old, injury-prone, and quite-simply, not good enough to be our striker. Lets say we get £5 million for him.

Another player I'd like to see the back off is Victor Moses. He has been inconsistent in this season, and hasn't delivered when its mattered - that's with a lot of opportunities as well. Lets say he goes for £10 million, having marginally improved. So having sold players, cut down the squad we have 17 players and a budget of £119 million.

John Obi Mikel plays a large part at our club at present, and does have a role to play. However many believe he quite simply isn't good enough, but he's just the only type of player at Chelsea. With the players i've got lined up to come in, we can part with Mikel. I reckon he's worth £12 million. Thats a budget of £131 million.

The next question is who to bring back on loan. Our loaned out players have had an excellent season, with the majority excelling to a first team standard for us. So, who make's the cut? Here's the top 10 of who's done well this season:

So this leaves us with 3 more players, in Lukaku, Essien, and De Bruyne.

Let's have a look at the likely line-ups as it stands. 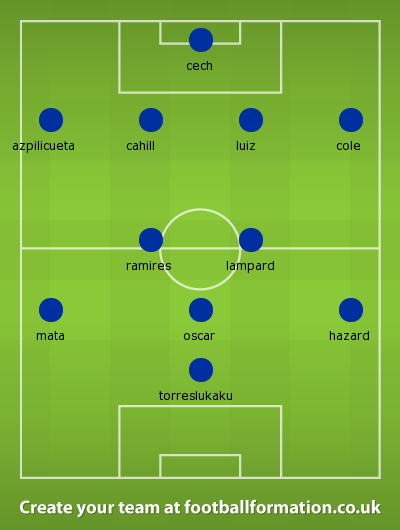 We now know what we need, so who and how should we get it with £120 million pounds? I think we should allocate the money in proportion to what is most important; which I feel is a quality striker.

What are the options then? Robert Lewandoski, Edison Cavani, Burak Yilmaz, Andre Schurle, Wayne Rooney, and Falcao are the likely candidates.

From this list Falcao seems the ideal player to join us, but we have seemed to miss out on him to uprising Monaco, for a huge fee. With Lewandoski likely to go to Manchester United or Bayern, and Cavani looking likely to go to City (if not I feel he's too much of a risk considering his cost... Remember Fernando Torres...), I'd love to see the arrival of Yilmaz at Chelsea. He's scored 32 goals in 39 games this season for Galatasaray, and he's been partnering Drogba up front. At 27 he's not the youngest player in the world, but at least that means we won't have to break the bank to get him. I reckon Yilmaz would cost us something in the region of £25 million pounds.

As there is no evidence that Yilmaz will continue his prolific goal-scoring rate in England, I'd like another Striker to make sure we'll bag loads of goals. This is where the Striker/Winger I talked about earlier comes into the situation. The player who fits in here is Schurrle. We've been connected with him for a while now, and a transfer seems imminent. He can play winger or striker as well, which is particularly handy. Schurrle will cost us around £20 million

So that's the Attacking department done, now to the defensive midfielder/s we need.

Luka Modric is a player of the highest talent, who we have wanted for many years now, and may be coming to us this summer. It's very annoying he's not with us already, as a £40 million pound offer was turned down for him, to see Luka go to Real Madrid for £33 million a season later! But now Daniel Levy has been taken out of the equation, and Luka hasn't fulfilled his potential at Real we have the perfect opportunity to take him to Stamford Bridge. At 27 he has a good few years left in him, and he may have not peaked yet, so £30 million is a suitable price for him.

The Dutch young player of the year is hopefully on his way to Chelsea this summer, and he is just the player we want to see coming up the ranks in our club. At only 20, he has enormous potential, and could be one of the best midfielders in the world on years to come - who knows. Compared with Lampard and Gerrard, he sounds the perfect player to take over the ageing Lampard. Being such a talent, It would be likely that he'll cost us around £10 million, not that that's a problem.

So we now have £35 for reinforcing our defence - a center back and a full back would be great.

Papadopoulos has been a consistent starter for Shalke under manager Fernando Santos. He has been capped 16 times for Greece and has scored four times, keeping in mind that Greece is consistently one of world football's best defensive teams and the fact that Papadopoulos is arguably the best defender on their team at the age of 21, Kyriakos is sure to be among the world's best in the very near future. He would be a valuable signing, and I believe with the fading John Terry, he could be a starter very soon. He'd probably cost us around £20 million, which is a bargain, considering he's for the long term at 21.

At 17, Luke Shaw is an excellent long-term replacement for Ashley Cole, in every respect - he can take over his England role as well. Shaw's quick, and very technical on the ball, as well as being a fine tackler. To top it off, he's a Chelsea fan - what's not to like about him? £15 million's the price.

I don't think that we should waste any more money as i assume these players will want a lot of money - so no new back-up keeper, which shouldn't be a problem however as Jamal Blackman is ready to fill Turnbull's shoes more than adequately. To recap, here are summer 2013's purchases:

Lets have a look at our new team then: 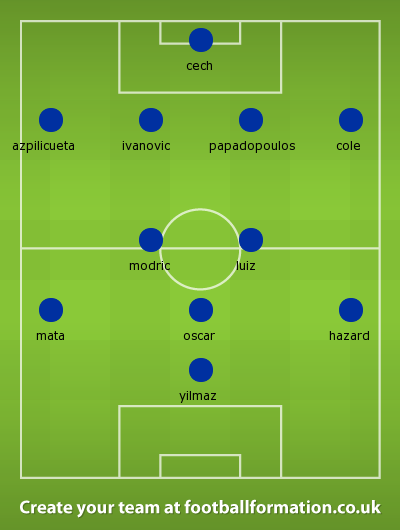 Immediately this squad has so much more depth and quality - I'd expect frequent rotation, but I think this starting 11 would be our strongest.

So that's my WAGNHSSS - hope you enjoyed it!