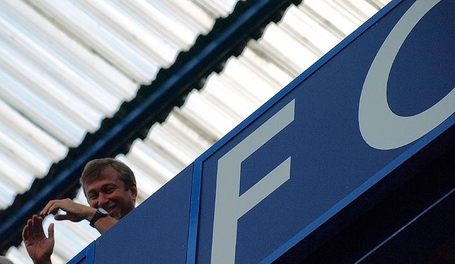 It's really amazing how WAGNH team create this section. I mean, we're all know when the season is over, the number of our beloved wagnh posts are lesser than it used to be. So this is really fun thing to do especially for the fans. Let's start this fiction thing:

His tremendeous save against Man City in first post-season friendly is enough to convince me to establish him as 3rd choice goalkeeper as he's still can play for U-21 too.

PvA is much better than Ryan Bertrand last season so I'll pick him over Bertie for LB spot. I'm quite sure he can compete with ageing Cole. I won't buy new player at LB as Cole just signed extension, albeit Luke Shaw and Fabio Coentrao tempt me.

Chelsea need backup CB and RB at the same time and I could only pick between Omeruo and Kalas rather than spend on this type of player. As Omeruo has more experience with National Team in big tournament, I choose to promote him.

Do I have to say anything about how good he is? Don't think so. He's so special and will be much improvement to Moses-Benayoun-Marin for attacking 3 in 4-2-3-1. Beside, Chelsea could use him in deeper position and he could also play in both flank of 4-4-2.

I wouldn't let him go on loan again as I assume he needs to settle here. Lukaku might or might not be the manager first choice but he'd actually know how to bully his PL opponents last season. This is a very valuable attribute compared to those strikers I'm going to buy from other League.

First and foremost, Chelsea need a deep lying midfielder who can hold the ball, win aerial battles, tackle, intercept pass, and willing to stay behind if needed. Mikel surely has those attributes but himself alone isn't sufficient especially considering there'll be so many matches ahead. He can play alongside Mikel or can be the better rotation than current Essien since he was good at Arsenal. 12m is possible price as he's not going to win any battle against Barcelona's midfielder.

Schurrle is great player and I know this by watching him quite regularly in Bayer Leverkusen (unless when the game weren't broadcasted in my local tv, I read Steve's report). Chelsea are also on discussion with the club already so I expect this deal to be done soon and I'm willing to pay Bayer 22 m for his service.

Shocking? Not really. Vela is not world class, Vela was Arsenal player, and Vela is cheap. So what? To me he's very good at Sociedad along with Griezmann and co. He can play as lone striker, second striker, winger, and attacking midfielder too. I like him a lot and would have him with my eyes closed. Transfermarkt.com says his value on the region of 11 m but consider he's Sociedad top scorer, Sociedad would only allow him to leave for 15m at minimum

Aubameyang is really good and I can say he's quite underrated since he's not under spotlight in Ligue 1 unlike PSG players. He'd be really, really good for 3rd choice striker and versatile too. 19 goals in ligue 1 would be a good bargain for 15 m I'm going to spend.

I actually would like to buy Lewandowski but as he prefers to play for Bayern, means I have to look elsewhere. It's easy to choose this time as Gomez would be unsettled by Lewandowski's arrival. Some say he's already decline, and his all round play is not great. Doesn't matter to me as I choose him due to his amazing positioning inside the box. 25m is still reasonable for striker at his class.

With QPR relegated and rumour linking him to Arsenal, means that there's a chance for him to move to another London club. So why not? He was world class and still got it last season. Would be good competition for Cech and much better backup than Turnbull-Hilario. Beside, giving Courtois to be 2nd choice goalie behind Cech is ridiculous. Give him 1-2 year contract and I believe he's keen to work (again) with our next manager.

These signings cost £92m in total and that's it. I consider these signings will be doing well and only Julio Cesar and Mario Gomez who don't have good resale value. That said, we can still make money by selling them if needed. These players are urgent to improve our current squad so I buy them it without selling our current players first.

I know defensively Chelsea need improvement and I already think about it so I don't spend all the money in the summer. But I firmly believe with the better manager coming in and the better midfielders + strikers already bought, we can play more effective football and score more goals in decisive games. Beside, the 2012 parking bus squad still good enough to guard our half.

Sell and Release on free

I like Ba, but to be honest, he has no special attribute to be better than Lukaku, Gomez, or Aubameyang (and Vela and Schurrle) in the near future. If Lukaku is beast and his overall game play is good, Gomez is clinical and Aubameyang (and Vela and Schurrle) is good dribbler, then Ba has less than the others. Sell him for 10m and no doubt mid table clubs would be interested.

22 goals in all competition would be enough for Chelsea to convince his move to European top side. Never underestimate his price as he's the shirt selling. The idol. He's available for 15m and could be more but no less.

I'm a fan of Bertrand but I assume he's nowhere near to be as good as Ashley. Not even last season, when Ashley was far from his best, he's still much better LB than Bertie. The situation is more difficult for Bertie as Van Aanholt, which to me much better than him, is coming back. As his contract will end at 2016, I'm going to give him chance to play regular football somewhere else on loan and will be looking on his improvement later. But if he wants to move, then I give him a go. Available for no less than 10m.

He was German Messi! He has good dribbling ability but this season is very difficult for him as FSW choose Moses and Benayoun instead. To me, he's not that bad and still got it so I'd rather make himself available for loan to see his progress later. But if any club interested with his service, 5m is a fair price to take him away.

I still can't understand the concept of Moses: whether he's an average footballer or he's a raw talent. To find out, I'm going to give him more minutes on loan somewhere but if there's any club willing to sign him, 15m or no deal.

Romeu has potential to be good defensive midfielder. However, he's too young and inexperienced to compete against Mikel, Essien, and Song for that position. As I respectfully give Essien the chance to see his contract finished at the end of the season, I give him a go somewhere on loan for more first team football and take him back a year later after Essien's departure. Not going to sell him but if there's 15m offer on the table, then why not?

Jeff is still not ready yet for first team but his future with Chelsea, I can say, is hurting him. I'd rather let him go somewhere else by his own decision rather than Chelsea's decision where he's going to play. Good luck Jeff.

Gael Kakuta is doing his job very well at Vitesse but he needs to improve a lot more again to be involved in first team. It's not going to happen soon, so he'd better go on loan again or just leave for £5m.

Ulises isn't really good but he's not really bad. I'd like to loan him out to Vitesse to see if he could progress. But my first choice would be to sell him.

I love him since Jose Mourinho gave him chance to play in pre-season friendly. However, the injury problems, I'm afraid, isn't going to end. I'd be happy if we could use him backup but he's not on that level. I'd be happy too if we can hire him to be staff or something like that. However, loan is a better option for him and £1m bid for him is acceptable only if he wants to leave.

I don't know what to do with him but he's not going to make it at Chelsea. So goodbye and goodluck to him. Oh! let's imagine he has 2 years contract so he won't be available for free. £500k and he can go. But if it isn't, he can go on loan. 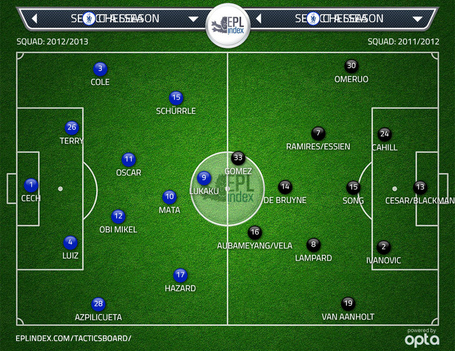 Pretty strong backup, eh? If you look again, you'll realize that these players I buy are the players who can play in various positions( 4-2-3-1, 4-1-2-1-2, 4-3-3, 4-4-2 and so on). So this is very great opportunity for the manager to use many formations especially if he considers Oscar to play as central midfielder, which I believe he's good at.