After sixty-three games, it feels strange to think Chelsea's season is winding down, with only three matches remaining in a long and difficult season.

It may feel even longer for fans of Aston Villa - Paul Lambert's arrival at the club has seen some terrible performances, exhilarating performances and bizarre performances, culminating in a battle against relegation that appears to appears to have been won by the Midlands side. With two games to go in the Premier League, they sit on forty points, three points clear of 18th place, the final relegation position. A point here will secure survival.

Lambert has a reputation as a tinkerer, but in the last clash between these two sides, his ambitious 3-5-2 formation was torn to shreds by Rafa Benitez's side. They were outnumbered down the flanks, and it was the freedom of Cesar Azpilicueta - who finished as the game's highest passer - to move forward and provide a good cross for Fernando Torres that began the rout. Incredibly, that remains the Spaniard's last goal in the Premier League. 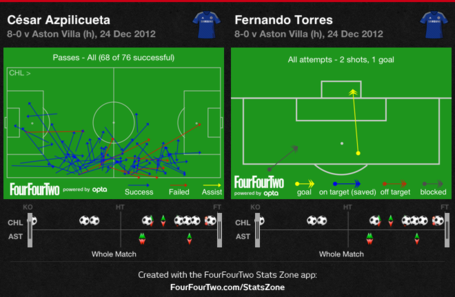 Instead, Lambert has settled on a 4-2-3-1, with Christian Benteke leading the line. With eighteen league goals, he's enjoyed a fine season, and was a deserved nominee for Young Player of the Year alongside Chelsea loanee Romelu Lukaku.

Like his Belgian compatriot, Benteke is enormous, his powerful, physical frame the ideal outlet for Aston Villa's counter-attacking game. He holds up the ball intelligently, and the rest of the team follows in support. Andreas Weimann and Gabriel Agbonlahor spring forward from their defensive responsibilities, breaking towards goal into the space between the centre-back and full-back.

When they lose the ball, Villa allow the centre-backs time on the ball, before pressing energetically through midfield, which might be an argument for David Luiz to drop into his natural position at centre-back, where he can provide long balls over the top for Fernando Torres or Demba Ba to chase. In this fixture last year it was this combination that lead to Chelsea's first chance - the only pass between the two in that particular fixture, but recent weeks have seen it become a fine source of chances.

When Villa drop back into a 4-5-1 shape, Yacouba Sylla will be at the tip of the midfield triangle. His energy and combativeness make him an unusual choice in that role, but he helps give Villa solidity, and his favoured movement towards the right flank to link up with Matthew Lowton, encouraging the full-back to move forward.

A more attacking selection would see Charles N'Zogbia or Brett Holman connecting the side, but both creative players have struggled for consistency this season. Meanwhile, Ashley Westwood and Fabian Delph play deeper, staying in relatively deep positions and protecting the back four, with Westwood tasked with distributing the ball positively when Villa hold the ball for extended periods.

At the back, the return of Ron Vlaar to partner Nathan Baker has added more experience to the side, and he plays the more aggressive, proactive role of the two centre-backs, rushing forward quickly to try and intercept the ball. He's also dangerous when on the ball - as well as hitting accurate long passes towards the frame of Benteke, he carries the ball forward into dangerous positions, which is where he fired in a fabulous long-range effort to open the scoring against Sunderland. Baker stays deeper, and competes in aerial battles more frequently. 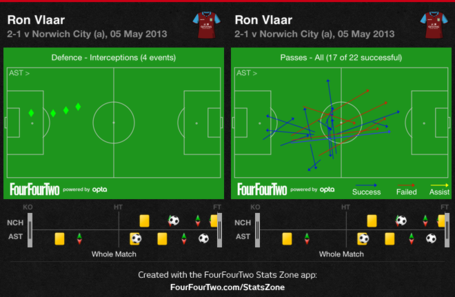 In the full-back positions, after a nervy start, Joe Bennett and Lowton have become the clear first-choice. The latter has become a key player, motoring forward readily and playing to Benteke's strengths with accurate crossing from deep positions. Against Sunderland, he touched the ball more than any other player, and provided the pass of the game - a defence-splitting cross-field through ball for Weimann's goal. On the opposite flank, Bennett has developed into a good defender but still can be exposed by the fact Agbonlahor is not always diligent in his tracking. 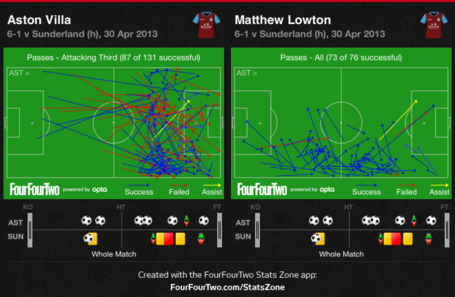