The final hurdle in Chelsea's long marathon race to Amsterdam takes them to Switzerland, and the country's domestic champions

Basel were widely regarded as the easy draw when it came to the penultimate round of fixtures in the Europa League but having already knocked out Tottenham Hotspur and Zenit St Petersburg they will be tough opponents for Rafa Benitez's Chelsea side.

Murat Yakin, who replaced Heiko Vogel in October last year, is yet to settle on a preferred formation, regularly switching between variants of 4-3-3 and 4-4-2. His options up front in the latter system have been reduced since Alexander Frei announced his retirement, and furthermore the selection in the previous round against Tottenham is probably the best indicator of how Basel will set up against Chelsea. In that clash, he used 4-3-3, with the combination of three ‘S's up front - Marco Streller leading the line, and Mohamed Salah and Valentin Stocker in support from the flanks.

Those who remember their incredible upset of Manchester United in last year's Champions League will note the absence of Granit Xhaka and Xheridan Shaqiri. The latter's dribbling ability was key in a counter-attacking system that saw the two wingers driving upfield quickly and moving into central playmaking zones, to link up with a striker partnership of Alexander Frei and Marco Streller. Losing their key deep-lying playmaker and winger has meant there is now a different feel to Basel's attack.

They still rely on the hold-up play of Marco Streller - he stays predominantly central and plays a target man role, bringing down long balls and encouraging the wide players to come forward. He can also play on either flank and is comfortable moving out into the channels, to link up with the wingers. He particularly favours the right (the whole side does, with 43% of their play coming down this flank), where Egyptian international Salah is deployed. 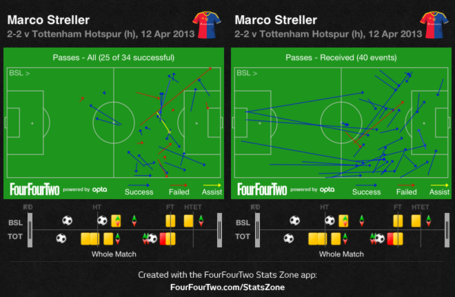 Salah is predominantly a dribbler and likes to come inside. He is generally the catalyst for Basel's attacking moves - he is often the deepest of the front three, and comes short to collect passes from international teammate Mohamed El-Nenny.

Salah's tendency to drive inside opens up space for Phillipe Degen, former teammate of Yossi Benayoun and Fernando Torres. That overlapping from fullback is important, because the tendency of Basel's front three to come inside can lead to congestion. With Degen, and the more reserved Park, motoring forward, Basel can stretch opponents with good width.

On the opposite flank, Stocker is more of a wide forward, playing a narrower role than Salah. He's almost a second striker, and his versatility enables Basel to play very fluidly in attack - they are constantly switching positions, combined with clever movement to drag away defenders.

Off the ball, the front three have little responsibility defensively, and Yakin is happy for them to stay reasonably high up the pitch, to prompt counter-attacks. If Basel spends long periods without the ball, they'll sit deep in a 4-5-1 formation, before breaking quickly down the flanks.

The midfield zone is perhaps the weakest area of the side. For the tie against Spurs, the trio of Geoffrey Serey Die, Mohamed Elneny and Fabian Frei started in both legs, but Cabral and Marcelo Diaz are also options in the central zone.

Against Tottenham, Frei played as the deepest of the trio, his main role being to split the centre-backs and thus allowing the full-backs to get forward. Meanwhile, to his left, Geoffrey Serey Die is full of hard running and happy to chase opponents all across the pitch, but his passing leaves a bit to be desired: he moves slightly left of centre to collect possession from Park Joo-Ho, and tries to hit highly ambitious long balls into the front three. 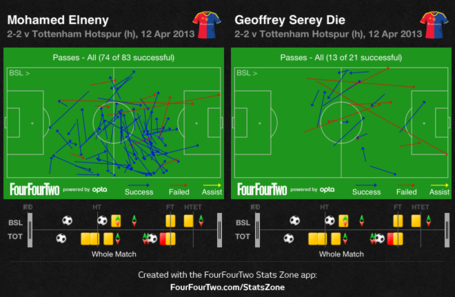 Yakin will have good options on the bench to change things around in midfield. Diaz is a playmaker and can provide extra creativity in an advanced or deeper, Xavi-like role, while Cabral is similar to Die and plays a box to box role, similar to Ramires.

Basel's centre-back pairing features two young, inexperienced players who have emerged as top talents this season - Alexsander Dragovic, a rumoured target for Arsenal and Sunderland, started out as a central midfielder for Austria Wien but has evolved into an excellent central defender, while his partner, Fabian Schär is strong in the air and has three goals in Europe this season from set pieces. At fullback, Degen and Park work hard to get back and defend, even when they are caught high up the pitch in attack, and take their positional cue from the other - if one goes forward, the other stays back.

While Basel attempt to press at a high intensity, the fluid nature of their front three means it's often disjointed, and centre-backs can sometimes enjoy good freedom on the ball. Jan Vertonghen's assist for Clint Dempsey's opener in Tottenham's 2-2 draw is a good example: the Belgian has the time and freedom to move forward into midfield and pick out the American's run.