Share All sharing options for: Tonight at the shrine of Mata: 2012/13 Chelsea statistics, third quarter upate

The last international break is over and the final quarter of the 2012/13 season can begin. Perfect time then for a quick update to some of the statistics that I've been tracking throughout the course of the season.

Much ado has been made about the schedule and associated congestionopocalypses and while I think some of that has been overstated and used as a convenient excuse for improperly managed squad rotation, make no mistake, Chelsea have played a shedload of matches this season already. Fifty-three, to be exact, and they're scheduled for at least twelve more - and hopefully a few extra ones beyond that as well.

The 53 played translate to exactly 80 hours of football (excluding added-on time): 2610 minutes in the Premier League (29 matches), 900 minutes in Europe (6 Champions League, 4 Europa League matches), and 1290 minutes in various Cup competitions (14 matches total; including the extra time versus Manchester United in the League Cup). Unsurprisingly, it is Petr Cech who leads all players in minutes played, having kept the Chelsea goal for 4215 of the possible 4800 minutes (87.8%). Ross Turnbull claims the rest of the minutes. 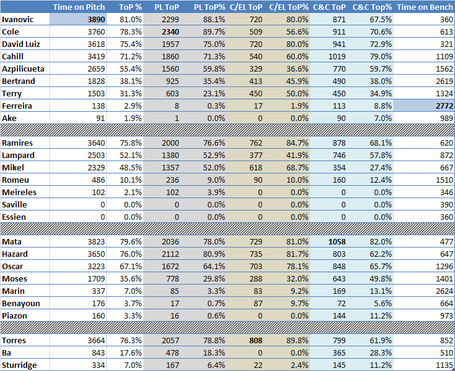 The leaders among the outfield players are just as unsurprising: Branislav Ivanovic (overall leader), Juan Mata (Cups minutes leader), and Ashley Cole (PL minutes leader) have been fixtures in the Chelsea lineup all season long. Fernando Torres (CL/EL minutes leader), David Luiz, and Ramires join them in the "75% Club." I fully expect Cesar Azpilicueta's name to appear in that club as well next season - the emergence of "Dave" has been one of the few quantifiable positives of the Interim regime. 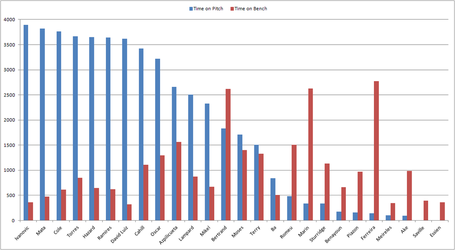 The special "I have finally played more minutes this season than Daniel Sturridge whom I once infected with airborne hamstring-strain-disease" Award goes to Marko Marin. Congratulations to the German Messi. 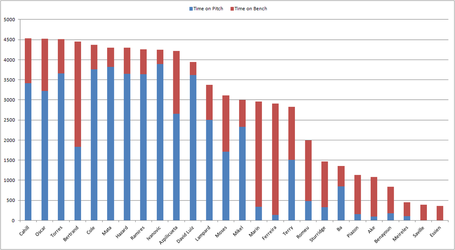 Marin's other season-long specialty had been sitting on and warming the bench - although he can't warm it too well for, you see, he's tiny - but he's been eclipsed in that regard by the eternal Paulo Ferreira. There's no shame in that of course, The Phantom has honed his craft with excellence and precision over the last few years.

The Phantom's apprentice, Ryan Bertrand, is another force to be reckoned with in bench minutes. Combined with his 30 appearances for the first team - that's just one less than John Obi Mikel! - Bertrand has been the fourth most "active" player on the squad. Ahead of him, the top three are separated by just 12 minutes, although Gary Cahill does continue to lead just as he has all season.

The usual caveats apply to these hockey-style scoring statistics. The game-changing criteria we're working with here is the original one, so only game-tying, game-winning, and first goals (and assists) count. 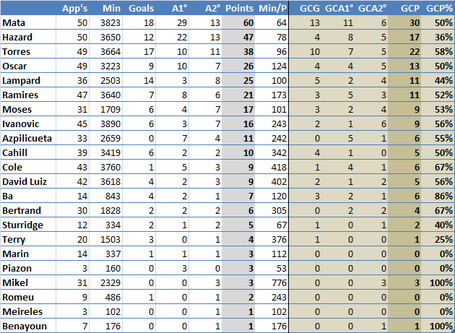 Juan Mata, just as he has all season, continues to be awesome. Eden Hazard's scintillating form has boosted him to almost a point/appearance as well and even his game-changing percentage has started to increase since the likes of Sparta Prague and West Ham United appeared on the schedule.

One player moving in the opposite direction is Fernando Torres. After posting 30 points in his first 31 appearances, Torres has just 8 in his last 18 - and that's including a random shoulder-deflection-goal. Unfortunately, Demba Ba hasn't exactly lit the charts on fire either with just 7 points in his 14 Chelsea appearances - although Ba's contributions certainly seem to come at key times: 6 of 7 points (including 3 of his 4 goals) qualify under the game-changing criteria.

With some luck, Chelsea could end up not only with a brand new record goalscorer, but with three 20-goal scorers for the season as well. That would be rather historic.

I think we've found partnerships to be a more interesting way to examine plus/minus statistics previously, so let's see how Chelsea's central defensive pairings, double pivot, and attacking band have fared so far:

Spectacular last-ditch tackles notwithstanding, the common thread between the three worst pairings defensively is Gary Cahill. Arguably, the Di Matteo special of Terry & Sideshow is still Chelsea's strongest, with the combinations featuring either of those two with Ivanovic generally suffering from sample size issues.

When Lampard - Ramires seems like a serviceable option, you know things aren't so rosy.

The biggest surprise here to me is that the combination of Mata - Hazard - Oscar (in whatever positional order) produces AND concedes fewer goals than the Chelsea season average. Sometimes, statistics are the worst.