A great goal we almost scored

Share All sharing options for: A great goal we almost scored

We all hate international breaks. We do. We hate them! Like teenagers without reliable internet access, our lives are empty and meaningless when club football is not around. (Hang tight tough. It will soon be over.) But one thing that we gain from these FIFA-sponsored Tests from the Lord... is time.

Time to step back from the fixture congestion and squad management; time to digest what had taken place during the trials and triumphs of the highly talented but inconsistent band of attacking trio; time to chew on old problems in the midfield; time to dream (Oh Jose, you are such a tease! *giggles*); time to take a breather from the Rafalution that suffocates Stamford Bridge like hot air on a humid day; and, in my case*, time to reminisce what could have been the one of the best Chelsea goals of the season...

* Which is now your case too since I wrote it and you are reading it.

It was a tough game for Chelsea U18. Derby County are a energetic, hard-working, physical team (Stoke City-esque if you ask me.) that had rammed (*Ahem*) their way into the Sixth Round Proper of this season's FA Youth Cup, and Pride Park was the venue. Despite being the current holder, Baby Blues have had an eventful season thus far, the comeback from 2-0 down against Charlton in Round 4 a prime example. It wasn't going to be a walk in the park (#SorryNotSorry) is all I'm saying here.

Turns out it was an entertaining affair, especially compared to how the senior team did in Romania 24 hours prior. Baby Blues played open, attacking football while the Rams pressed hard and defended strongly. Chelsea were definitely the better side and took a deserved lead when Lewis Baker converted from the spot with only a quarter of an hour gone. Derby understandably started to gain momentum after that and pushed for an equalizer. This was when it came about. 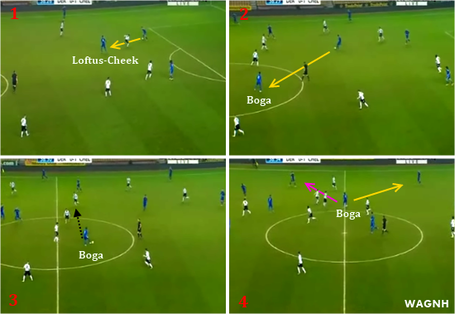 It had a humble beginning. A simple, but patient, buildup from the back. Ruben Loftus-Cheek picked up the ball from the defense before pushing it forward to Jeremy Boga (aka He Who Schooled Those Amateurs From La Masia Factory). Boga, by simply being Boga, drew the attention of two Derby players right away. The youngster would hold off using his magical power for the time being and dribble across the halfway line.

He could probably have advanced the ball to the right flank but the opportunity passed quickly as he hung on to the ball a tad too long, which we will be able to forgive in just a sec. With his options shut down, Boga had to make a back pass to the right. The buildup seemed to have suffered a minor set-back. But wait...

[Hover mouse pointer over or tap GIFs to view.]

But with the pressure from Derby players off of him for a split second, Boga dropped back quickly to get the return pass. As his marker stepped up, Boga turned swiftly and never looked back. If he did he would have seen his marker chasing him like a little lost puppy. No step-over; no nutmegs; no elaborate trickery of the feet. Just a simple, effective turn, executed precisely with speed and vision.

Boga would cut through the Derby midfield and BAM! we were in the attacking third, unfazed by the two players closing him down from left and right. It was time to crank this up a notch. Over to Baker: Lewis Baker.

YES! THAT WAS ACTUALLY WHAT HAPPENED!

I don't even know if I could describe what Baker did to the ball there. All I know is that it involved a ballerina-esque swivel, a back-heel/pull, a no-look, well-timed, defense-splitting through-ball, and poetry.

If I can close my eyes quick enough after seeing that pass, which I've nick-named OUTRAGEOUSNESS*, I can imagine the on rushing Alex Kiwomya blast the ball into the upper 90 with power, or pass it low into the corner with composure, or, if I may be greedy, chip it Ramires-at-Camp-Nou style with finesse.

* Please, feel free to suggest your own in the comments.

It doesn't even have to be any of those options. The ball can get rebound off the keeper and land in the net for all I care and it would have been a great goal. One of the best goals Chelsea would have scored this season across youth and first team. But it was not to be. Kiwomya's shot was straight at the keeper who, to his credit, was positioned well and made himself big.

Sorry, kids. This story doesn't have a happy ending (which, of course, I have already given away in the title). But it doesn't stop me from thinking about this chance and what it could have been. Also the fact that this particular instance came from Chelsea youngsters adds another layer to the imagination--of what it can be in the future.

If I try hard enough, I can forget we are Chelsea and that youth players have a tough time making it into the first team here, and picture a future where the talents of Baker, Boga, Kiwomya and other youth players get to reach the full potential at Stamford Bridge. That would be quite magical.