The "Jose Mourinho to Chelsea" rumours are heating up again, so soon after the Portuguese took us to MOUCON 4 this morning.

It's official, the Managerial Rumour Level is now at MOUCON 3. That's half-way between MOUCON 5, where nobody's taking a potential of his return very seriously, and MOUCON 1, where his return is imminent This morning, Jose himself put the football world on notice by being a monumental tease. Tonight, however, Twitter has poured yet more fuel on the fire.

This isn't the first time talks between the owner and Mourinho have been reported, but it's not often someone with a reputation like Chris Cohen's has reported them. It's encouraging, if you're a fan of The Special One returning. Of course, even if these are accurate, there's no guarantee the talks were productive. The reports could be true, and he could still go elsewhere. Who knows? 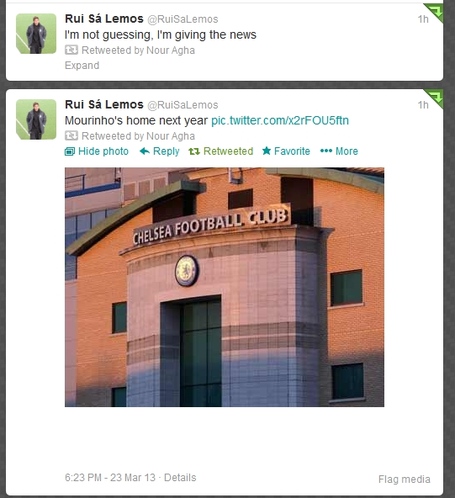 Shortly after these were tweeted, the entire account was deleted, so there's a very good chance this is a fake rumour to be disregarded. If, however, the account was legitimate, it would be something to pay attention to. As a Porto coach, there's every chance he could have heard something about Jose's plans, as Jose is known to retain contacts at Porto, as well as most of his former clubs.

According to this article and Google Translate, it appears Rui Sá Lemos is both very young and a strong admirer of Mourinho. As someone exceptionally-young and at Porto, it's not really a huge leap to think he might have been introduced to Jose at some point. That's still conjecture, more than that Ruud Gullit would know, of course, but it's a conjecture business. The article also does mention him having a Twitter account, so, if one squints enough and forgets to take one's meds, it makes perfect sense.

Right now, it all feels like Dan Brown stuff, and is probably as accurate, but the tide of rumours is going the right way for a Chelsea return for Mourinho. Very little has been reported about him going elsewhere, and that which has has generally reported in the context of other clubs being an alternative, not the front-runner. As always, though, we know next to nothing, and will have to wait for an official announcement. He may not be everyone's choice, but if you're hoping for his return, there's reason to take hope. There's rarely this much smoke without at least a little fire. Only time will tell, though!