The needed goals were scored, but how?

Share All sharing options for: Analyzing the three goals scored vs Steaua Bucharest

Chelsea are through to the quarterfinals of the Europa "Red-headed Cousin of the Big Eared One" League (to face Rubin Kazan) thanks to the three goals from Juan Mata, John Terry and... Fernando Torres (*rubs eyes* Really? *pinches self* Oh, it actually did happen. Wow.) It wasn't an easy game for the Blues who scored first but then remembered they were Chelsea and allowed Bucharest to score before the half time whistle. Additional two goals were needed in order to advance, and the goals did come as the result of an impressive second half performance. Let's take a closer look at the three goals Chelsea scored in this game.

The first 30 minutes of this game followed the same pattern as any recent games in which Chelsea played against a weaker side who were determined to stay compact defensively and attack on the break. You can't really blame Steaua Bucharest for their approach because (a) they are in the lead with their home goal and (b) playing on the counter tends to work well against the Blues. We have talked a lot about that second point through out this season. Chelsea's radically hobbitized front line can be stopped with a disciplined defense and the team lacks a midfield creator from a deeper position (see Modric, Luka #TheOneThatGotAway) who can unlock such tight defenses.

Thus, it is perfectly logical that we have a portion of the game in which Chelsea dominates possession* but fails to create meaningful chances** while the opposition, solid in defense, comes closest to scoring despite not seeing the ball much. The away team pressed and defended with purpose and the Blues were unable to penetrate.

** Shots hit head-to-head in the first 30 minutes: Chelsea, 4 (all from outside the box; three by John Obi Mikel) vs. Bucharest, 3 (two from inside the box; one needed a strong save from Petr Cech). 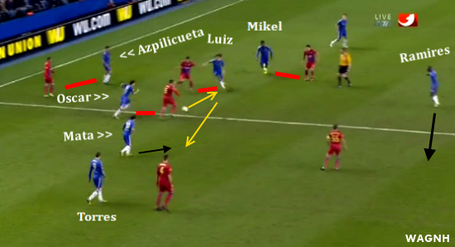 So it kind of makes sense that the break through goal came from a rare Chelsea counter attack. Here you see Bucharest in possession on their left around the half way line. Chelsea were pressing hard with Cesar Azpilicueta, David Luiz and Mikel very close to their marks. Oscar would track back and make an important tackle to win the ball back. David Luiz stepped up to the loose ball and found, with his first touch, Juan Mata in the opposition's half.

These were important interventions from the two Brazilians since it allowed Chelsea to now attack at an unorganized Bucharest defense. You should also note David Luiz's ability to intercept here. There have been times when it didn't work, leaving the defense exposed, (it's a high risk, high reward game) but the Brazilian was on his game this time around, winning three interceptions (second only to the Interceptor Bunny, Ramires). 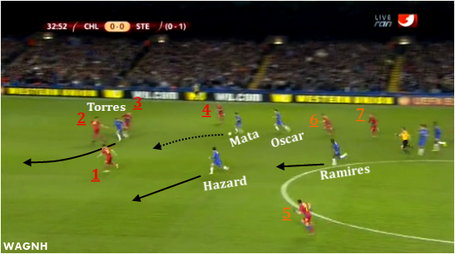 When Juan Mata dodged the initial tackle that flown in, the away side's defensive lines that stayed compact in the early stages were stretched. With Torres pushing the last line (defenders 1, 2, 3 and 4) back, three Chelsea play-makers had a ton of space to exploit (as midfielders 5, 6 and 7 tired to catch up). Plus, Ramires had also sprinted forward centrally. Hazard moved left, Oscar overlapped on the right and Mata dribbled centrally. Further ahead, Torres made some confusing runs: he angled toward the right first, then decided to come back into the center. But credit to the Cursed One for staying out of the way as Mata and Ramries one-two-ed their way forward, and Mata put Chelsea ahead after displaying ballet dancer-esque balance in the box.

It's been awhile since we've scored a quality set-piece header goal. Heck! It's been awhile since we are able to deliver quality set-piece crosses! So this goal gives me more satisfaction than it normally would have. No doubt there were some poor defending from the opposition in this particular set-piece: Terry's marker was easily blocked by a routine set-piece tactics; another didn't have the sense or awareness to pick up the unmarked Chelsea center back dashing across the box.

But it was a goal in which everything went according to plan: David Luiz and Torres held of Terry's marker; Mikel's near post run cleared Terry's path; the delivery was inch perfect; Terry's header, straight out of the textbook (Chapter Four: Attacking Set-Pieces Crosses Like A Legend). 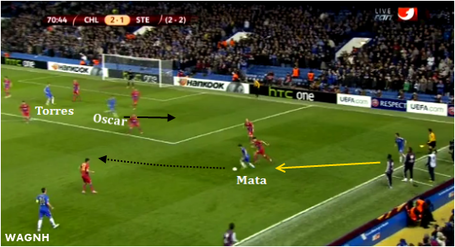 There were also defensive lapses in the buildup to the all-important third goal scored around the 70th minute; heavy pressing in the first half probably took a toll on the Bucharest defenders. Mata received a simple throw-in on the right flank and was able to dribble across the pitch untroubled. (Maybe the players in red just got tired of kicking him from the back. Seriously. Some acted like complete [ducks] in this game!)

There were three Chelsea players in the box: Oscar, running to the right; Torres, unmoved at the center; Hazard, unseen in the frame to the left. 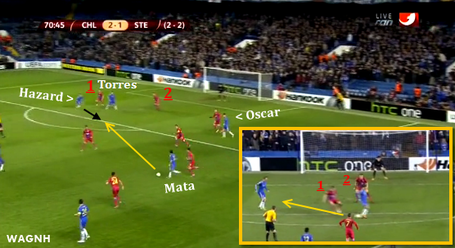 Bucharest had numbers in defense but the organization was flawed. As Mata looked to pass into the box, there were two players in red who could/should have blocked the passing lane but didn't. Here the movement from Eden Hazard was crucial. As Torres stood firm by the penalty spot, Hazard anticipated well and cut across to the center to receive Mata's pass.

In the process, the Belgian also dragged (zoomed in frame now) one defender, No. 1, with him and occupied another's attention No. 2. This meant Torres, who had made minimal movement in the box, found himself unmarked when Hazard cast magic on the ball with the slightest of touches, guiding it toward his goal-starved teammate. Torres took two touches before finishing coolly with his left foot. Curse broken! World poverty eradicated! Middle East reconciled! Impossible is nothing! (Well, at least until the penalty miss... #FormIsTemporaryCurseIsPermanent)