It didn't take long on Sunday for Chelsea to go down a goal to Manchester United, as a brilliant pass from Michael Carrick ended up in the back of the net after Javier Hernandez placed a wonderful header into the upper right corner. It's easy to write the goal off as just a brilliant pass and finish, and frankly, it was. That said, this was an opportunity that should never have been able to happen without a big assist from Chelsea's defense.

Just seconds prior to the goal, Chelsea looked extremely organized. The back line was deep and compact, and every single United attacker was marked well enough to be closed down as soon as a pass was played in their direction: 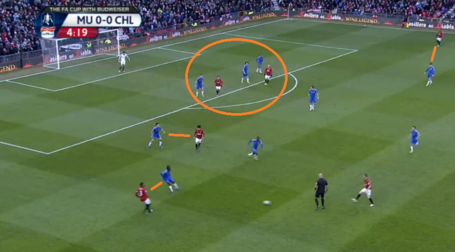 Cleverley's ball to Patrice Evra isn't going to be particularly dangerous, and both Cesar Azpilicueta and Ramires are already moving to cut out his options once he receives the ball. It's excellent defensive organization, and it leaves United with no real attacking options.

Evra was forced to play the ball back to Cleverley, and because of both Ramires and Juan Mata closing him down, the ball couldn't be played in front of him. There's little space between Frank Lampard and the center backs, so there is no real space for Carrick to slide the ball into: 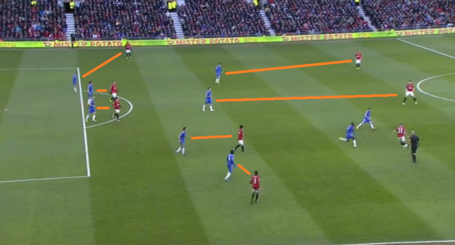 Chelsea are still positioned basically perfectly, with every player in the attack accounted for. Cleverly has no option but to recycle the ball to Michael Carrick, and he's going to have Juan Mata closing him down shortly after he receives the ball. Ramires has left his position, but both Frank Lampard and Oscar are positioned perfectly to cover for the Brazilian.

Both Wayne Rooney and Hernandez are well marked at the moment. Both are retreating as United resets, and David Luiz recognizes this and motions for the defense to move with them and limit the space. It's exactly what the defense should be doing, as allowing one of the pair to receive a ball between the center backs and the pivot will probably result in a dangerous through ball. 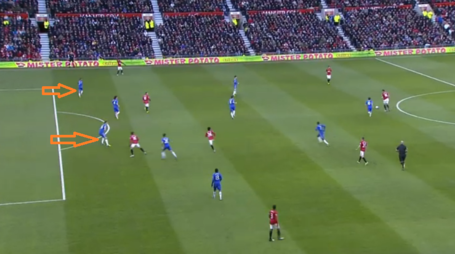 While Luiz clearly followed his own instruction, neither Ashley Cole or Gary Cahill did. Hernandez has seen this, and now has three yards to build up a head of steam in case Carrick plays a ball over the top. Carrick can also see this clearly, and doesn't have to hurry the pass: 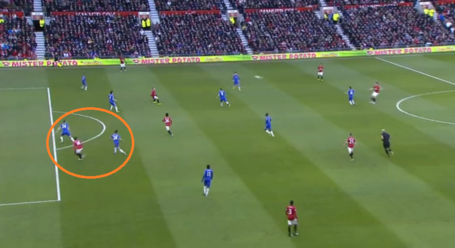 Now we're getting into a tricky spot. Hernandez is running full speed and will likely be getting a touch in the box. United have a pair of attackers in Rooney and Kagawa that can now run in behind, leaving the defense in a bit of a shambles. At this point, it's up to Gary Cahill to deal with Hernandez, and Azpilicueta, Cole, and Luiz need to cut out any options for a ball to someone trailing the play. 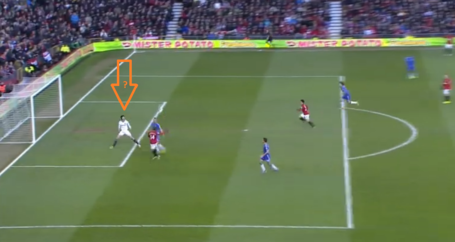 Cahill has actually done a fairly decent job of dealing with Hernandez, taking away the option of cutting the ball back and leaving him very little space to take a touch. Luiz correctly read the danger from Rooney, and passed him off to the midfield. Azpilicueta failed to deal with the run of Kagawa, leaving him as a real threat should Hernandez play him the ball.

In the end, this probably wouldn't have ended up a goal had Petr Cech not come off his line. Chicharito doesn't have time to take the ball down, and he's not likely to head the ball powerfully enough to beat Cech if he's positioned properly. Looping it over him was only an option because he was caught in no-man's land, which unfortunately happened.

That said, the space left for Hernandez to get a running start made this a much tougher read than it should have been. If Cahill and Cole follow the instruction of Luiz, Hernandez has to hold his run until Carrick plays the ball. If he has to hold his run, Cech gets to that ball easily. Good attacking teams like United are going to exploit basic mistakes like this one, and although it took a brilliant pass and excellent finish, it was a chance that could easily have been prevented.