On the ineptitude of Rafael Benitez

"...by definition luck, good and bad, strikes at random, and a gene that is consistently on the losing side is not unlucky; it is a bad gene." -Richard Dawkins

Share All sharing options for: On the ineptitude of Rafael Benitez

Occupied by the horrors of Nouveau Chateau, we had all forgotten to wish happy birthday to the Rafalución. It turned 21 on that bloody Saturday, profusely bleeding yet miraculously surviving the guillotine wounds inflicted by Sissoko. Happy Birthday! Twenty-one is an important milestone in many lives, Chelsea managers included. Twenty-one matches, after all, is the new yardstick, the new standard unit of measurement - Presidents have first 100 days; Chelsea managers have first 21 matches* - with the likes of Hiddink and Di Matteo etching their name into club history just that quickly. Well, Guus Hiddink actually won the FA Cup with his 22nd and last (for now, he said in hushed, hopeful, conspiratorial whispers) match in charge, but let's ignore that for sake of narrative.

* Unfortunately none of whom have ever been fired after their first standard.

At the end of Andre Villas-Boas's first 21, serious questions were being asked of his competence - three straight wins over Newcastle, Valencia, and Manchester City earned him enough time to see 40. At the end of Roberto Di Matteo's first 21, he was lifting the Champions League trophy high into the Munich sky. At the end of his second 21, he was lifting just his head up high into the London night. His replacement has now been in charge of 21 matches as well, but the only thing he's been holding are the vouchers for free points for visitors to Stamford Bridge. 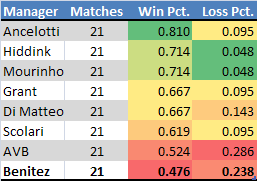 Hated by the majority since his arrival, he has not done himself many favors with his results. We have to go back 17 years, to the days of Glenn Hoddle, to find truly worse. His first 21 matches in charge have yielded the worst winning percentage of any of the Abramovich era managers. Laughable cup performances, late-match collapses, inert tactics, head-scratching post-match comments, even worse substitutions and in-game management, and a measured drop in league performance - he's got it all! As added value, there's also that sudden and hilarious inability to win on Wednesday nights.

When he took over, the club was already effectively out of the Champions League. Blame for that falls squarely on Roberto Di Matteo's shoulders. With focus clearly on the Premier League, this should've made his replacement's job and main priority quite clear. Thirteen Premier League matches later, the rate of return stands at a paltry 1.69 points/match, good for equaling last year's 64 total points and 6th place finish. Di Matteo, who literally gave up on the Premier League last season, was on pace for 76 this time around and a comfortable third place. 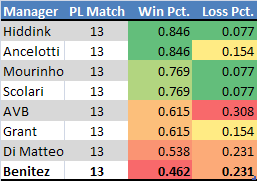 Some people - but especially ones named Rafael Benitez and the editors at the Guiness Book of All the Excuses in the World - have called him a bit unlucky. Too many wasted chances and too many individual mistakes, they say, despite generally dominating matches. Too many fixtures, they say, despite 60-match seasons and twice weekly matches being the norm around these parts. Too many injuries, they say, to an already (relatively) small squad. The man has no luck, they say, and gets Sissoko'd or Diame'd or Lambert'd or Puncheon'd or SWP'd or Ivanovic'd or ballboy'd or AFCON'd or...

Sure, in isolation, each unlucky incident could be excused away to the wills of cosmic forces. But luck, by definition, is random. It strikes good or bad regardless of situation. There are no loaded dice here. And as the Richard Dawkins quote says at the top, a gene that consistently ends up on the losing side, it's not unlucky, it is just bad. Just like a striker who gets "unlucky" way too many times or a manager who cries "unfair!" after every single bad performance. (Or, conversely, a manager who's been accused of simply getting "lucky," rather than being universally recognized for an amazing string of Champions League results, from Napoli to Bayern Munich.)

There have been some good results sprinkled in, to be fair. Wins against Everton, Arsenal, Stoke, or even Norwich were all excellent three points to gain. The 8-0 demoliton of Villa was fun. But all those are starting to look like the exceptions to the rule, rather than the norm - and that's not even considering the context in which and the purpose with which he was brought in (to "fix" the team, something about "the right direction" and "winning and winning with style").

Certainly, Di Matteo had plenty of room for improvement, nobody is claiming otherwise. He was not perfect and seemed almost as wedded to the 4-2-3-1 as his replacement has been. But at least he was likable, "cool," and most importantly, accountable for his own actions and decisions - and not to mention, a club legend already. There was hope that he would learn on the job and improve to become a better manager. He also had a great trophy record, despite embarrassment in Monaco.

Now we're left with a replacement, seemingly unsackable by some strange voodoo magic, who at his rare best is just another Di Matteo, while at his usual worst, is the most inept manager in almost two decades. He's had his chance, he's had his standard 21 matches. There is nothing to gain from allowing him an AVB-esque lifeline. There is no future with him.