Chelsea were beaten comprehensively at the Etihad Stadium on Sunday, going down 2-0 thanks to second half goals from Yaya Toure and Chelsea-killer Carlos Tevez. Worse than the result -- losing in Manchester is hardly unexpected -- was the completely gormless performance. The Blues had two shots on target all match, and one of them was a penalty saved by Joe Hart.

Why did we play so poorly? It has a lot to do with the way both teams set out: 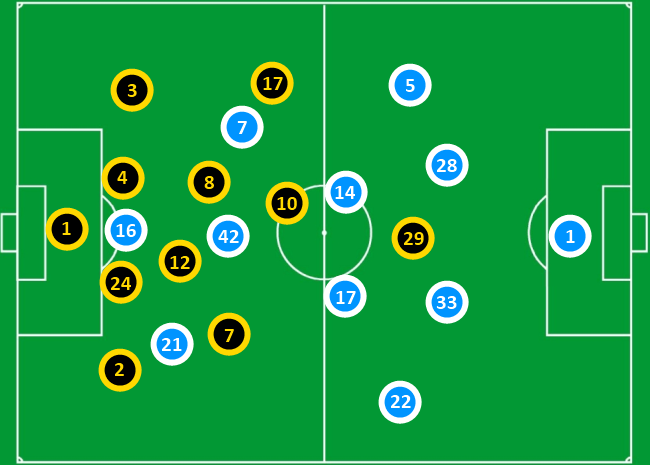 When a team goes to Manchester City, it's rather understandable that they'd be set up to contain and then counterattack. This is what Rafa Benitez set out to do at the Etihad, and it's a very reasonable strategy -- the Blues are one of the best teams in the league at springing the trap, and if City pushed too many players forward they could be punished by Chelsea's front four of Eden Hazard, Ramires, Juan Mata and Demba Ba.

The Chelsea team, therefore, was set up incredibly deep, a move aimed towards soaking up as much pressure as possible before breaking out. The defensive line was narrow, relying on the wide attackers (Hazard and Ramires) for support in case City attacked on the flanks, and neither John Obi Mikel nor Frank Lampard were in a position to do much but sit immediately in front of the back four.

It's not an unreasonable game plan except for the minor detail of it not working. At all.

Because while Benitez was seeking to hit City on the counterattack, Roberto Mancini was doing his best to blunt that threat. He fielded an incredibly defensive lineup -- Yaya Toure, James Milner, Javi Garcia and Jack Rodwell were all involved from the off, with only David Silva and Sergio Aguero unable to do heavy defensive lifting. I don't think that this wasn't an attempt to control midfield, rather it seemed like a deliberate strategy to occupy Chelsea's pivot while maintaining a central midfield block on any possible counterattack.

With Milner and David Silva both comfortable across the pitch, City were able to keep the latter in the middle while the former went wide against Ashley Cole. On the right, Branislav Ivanovic was often marking empty space as Ramires moved to pick up Gael Clichy. Sergio Aguero was left to do the heavy lifting against Gary Cahill and David Luiz, which goes some way towards showing why the hosts were so toothless from open play in the first half despite dominating possession.

Normally, one might expect a team in this position -- going up against a determined and broadly competent (we'll ignore just how porous the Chelsea right was for the moment) defence with and getting basically nowhere -- to be vulnerable to Chelsea's counterattacks. But they weren't and Javi Garcia was the key man in thwarting the Blues attempts to break out.

With Demba Ba occupied by both centre backs, Ramires and Eden Hazard were Chelsea's best options to break out. But it was the Brazilian that Mancini was apparently more concerned by, and Garcia's movements in the centre of the park seemed designed to prevent him getting the space he needs to go on one of trademark forays forward. Ramires seemed to always find himself in a position where he didn't have the time to get away with his poor first touch, and when Garcia couldn't come across to cover, Clichy picked up the burden.

One of the reasons Ramires was so easily contained was that he was having to do so much work on the defensive end. We saw last season just how effective he can be as a defensive winger, and he did well in supporting the out-of-form Ivanovic as Clichy pushed up on the right, but that left him having to run from very, very deep when Chelsea did win the ball, giving City more time to adjust to him (as well as giving him more time to make the inevitable mistake).

On the other flank, Hazard did significantly better against Pablo Zabaleta, but although the Belgian's a more skillful, creative player than Ramires, he doesn't have the same direct approach. Without quick support from anyone but Demba Ba, who cut a very lonely figure up front, Hazard should have challenged his immediate opponents more often and looked to attack the penalty area. Instead, he held up play, which allowed Mata to help out but also gave City the time to re-form.

Indeed, Chelsea's only serious advantage in the first half was the ridiculous number of free kicks they were earning. Unfortunately, Mata's delivery from set pieces was so weak that none of the many chances the Blues had to test Hart's goal came close to fruition -- with David Luiz, Cahill, Ba and Ivanovic on the pitch and capable of doing damage in the air it's completely inexcusable that none of the corners or free kicks earned got past the first man.

After the break, Benitez reacted by coming out of his shell at little bit, allowing the team to stretch out and giving the attacking players some more support. Chelsea looked more dangerous at that point, and they did very nearly snatch the lead with Lampard's penalty, but the tactical change also gave David Silva more space to play with, and he and Yaya Toure combined in deadly fashion 63 minutes in.

What followed was a set of bizarre, seemingly-panicked substitutions from the interim manager. Oscar was brought on for Hazard despite Mata's obvious fatigue and general poor play, Victor Moses came on for Lampard, who had done very little wrong in open play apart from getting sucked too deep on City's opener, and Ramires, having as poor a game as I can remember and a foul or two away from being sent off, was moved to a position of even greater responsibility in central midfield.

Fernando Torres came on a little while later as Chelsea shifted to what was probably supposed to be a 4-4-2 but in practice was more of a strange, smeared entity that featured Ramires at right back, David Luiz and Oscar in the pivot, Moses as a winger and both Torres and Mata looking thoroughly confused. City took advantage of our utter lack of organisation combined with the need to go forward and killed off the game through Carlos Tevez.

In hindsight, Benitez was outfoxed by Mancini, but I don't think the original plan was totally insane. Chelsea like to counterattack; City were expected to push forward at home. It's a pretty obvious strategy, and one I'd have probably gone with as well.

What was really strange, however, was the complete inability to adjust to City's plan. Once it was clear that the original plan wasn't working, Benitez should have taken steps to pin the hosts back and look to overload the Rodwell-Garcia pivot. Freeing up Lampard and Ramires should have been a priority, and a move to a 4-3-3, sacrificing Mata for Moses early on, would have provided a reasonable and fairly obvious answer. 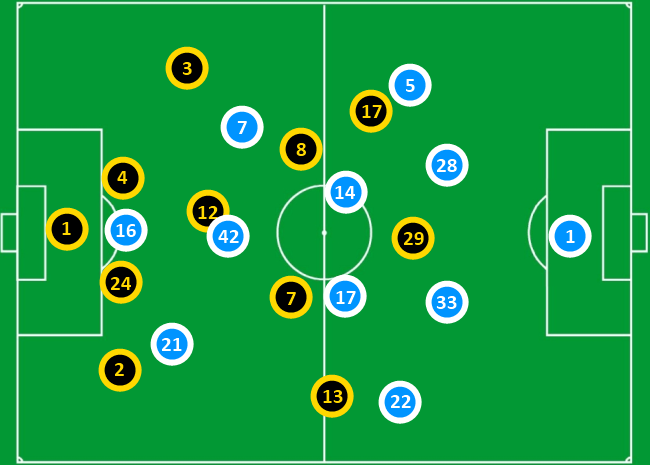 Moses, Hazard and Ramires are outlets for the counterattack, City's pivot midfield is disrupted, and if James Milner comes inside to overload the centre Cole and Hazard have free reign on the right. Just as importantly, Demba Ba isn't completely on his own up front. It's a braver and better-balanced system. Yes, there are some defensive issues to work through, but it doesn't seem completely crazy to trust David Luiz, Cahill, Mikel and Ivanovic to keep out Yaya Toure, Aguero and Silva if they're not under constant siege.

Instead, we got... well, a mess, and a loss. I wasn't particularly hopeful that Chelsea would come away from the Etihad with even a point, but the complete and utter mess we saw on Sunday strikes me as unacceptable. Not all of that is Benitez's fault -- he would have been surprised by the defensive nature of Manchester City's lineup -- but he should have adjusted far better than he did.

Benitez's system for games like this is also problematic. By relying on the counterattack down the wings but providing no meaningful support in the centre (Oscar should have started over the clearly exhausted Mata), Chelsea are incredibly predictable. This allowed Mancini to take straightforward steps to completely neuterany threat we might have offered.

It was depressingly easy for City, in the end. Plan A didn't work, and Plan B seemed to involve trying desperately to come up with something that looked like Plan B. That's life these days.