On the frailty of the right flank versus Manchester City

Chelsea's right flank was overrun against Manchester City on Sunday, and re-watching the game makes it easier to understand why this was the case

Share All sharing options for: On the frailty of the right flank versus Manchester City

I didn't get to watch yesterday's game live due to other commitments, but was fully aware of the results prior to watching the game on my DVR. While it's always a bit less exciting when you already know the outcome of the game, in this case it was probably best to be prepared based on all of the comments that I had read.

i knew in advance that the majority of City's chances were created from their left flank, and WhoScored's match report backed that up with statistical data. Many of the comments that I read speculated that the combination of Ramires and Branislav Ivanovic having both been played centrally in recent games was at fault, but after watching the game I didn't come away feeling that this was the issue at all.

I decided to grab a few screens this morning highlighting what I feel was the biggest issue with Chelsea's defensive work against City. While I only grabbed two from the opening minutes of the game, this was an issue that popped up repeatedly, and I probably could have found 20-30 more had I felt like watching the whole thing again*.

Just over two minutes into the game, City had their first real chance to get in behind the Chelsea defense. So let's take a look at the buildup to that occurring, shall we? 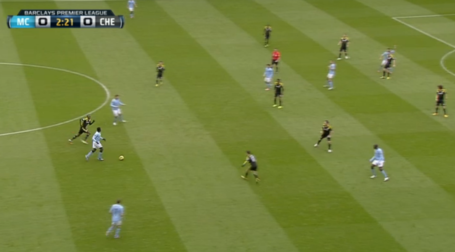 You can see that Chelsea have a perfect line established with their back four, and Kun Aguero is clearly offside and moving toward the goal (you can't see Ashley Cole in this grab, but he's actually just ahead of the line). Speaking as someone who has watched the next few moments already, I can assure you that Aguero will not actually come back to put himself in an onside position, so he has effectively taken himself out of the play if we assume there is a competent linesman involved. Now we'll fast forward exactly one second:

Despite the Argentinian having been offside, Yaya Toure has decided to play the ball over the top for Aguero anyway. Why would he do that? In this case, it's due to a Chelsea player getting jumpy with someone free behind him and breaking the line to get into position to cover. Gary Cahill inexplicably stepped back to cover the City striker, playing him onside for Toure to target and leaving the rest of the Chelsea defense for dead. Toure's ball wouldn't be good and Chelsea would force a corner, but it's disheartening to see them take exceptional defensive positioning like that and turn it into a dangerous situation.

Next up, we're going to fast forward 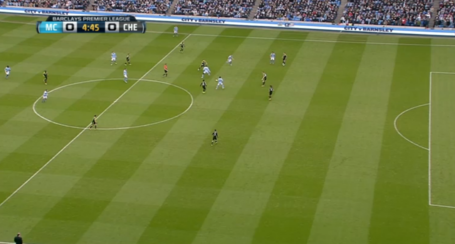 As you can see here, Luiz and Ivanovic are holding a pretty solid line as City take possession. Gary Cahill had played the ball forward several seconds ago, so he's now backpedaling into position. Why don't we fast forward again by one second?

Again, a Chelsea defender has broken the line without need, leaving the rest of his defensive mates with an awfully big mess to cover. The offender in this instance was Branislav Ivanovic, who saw a run coming on the right flank and took off to cover it. David Luiz has seen this and is now scrambling to cover the space behind Cahill that Ivanovic has brought into play, Cahill doesn't seem aware that Bran has taken off and that he's now out of position.

The right side of the defense was a major issue yesterday, because Cahill and Ivanovic were repeatedly making simple errors like these. As soon as one of those two broke, it left the rest of his teammates with scrambling to do in order to cover. It also put more of the right flank into play for City, which would explain why so much of their attack was started on that side.

Cahill did a very admirable job in dealing with the City players that got in behind the defense yesterday, but the vast majority of those situations were easily avoidable and often of his own creation. Our defensive unit needs to work as a single entity, and yesterday both Cahill and Ivanovic repeatedly broke the line while the remainder of their defensive mates continued to hold it.

*I honestly believe this is the single largest issue with our midfield. It really doesn't matter who we have playing there, at the moment there is just too much space for any pair to effectively cover.

Yesterday we saw the reason that Chelsea just can't seem to make the high line work. While every Chelsea defender not named John Terry or Paulo Ferreira have the physical tools to excel in that sort of system, they just don't seem to be comfortable leaving offside players for the linesman to deal with. Unfortunately that leaves the linesman without a difficult decision to make, and usually leaves the defense in shambles.