It’s an Olympic medal ceremony. Three exceptional athletes stand on the podium wearing the achievement of their hard work, dedication and natural talent around their necks. The national anthem of the country represented by the gold medalist has been played and now it’s the time to take a picture of the athletes with their medals. The television camera goes for a close up, panning from right to left: the bronze medalist, glowing with joy as he raised his medal up; the gold medalist, beaming with pride, eyes glistening with a hint of tears; then the silver medalist… staring into the cameras with an empty expression as if his soul has left his body, lips tense in an attempt to hide the disappointment.

Of course there are some exceptions but the above description is generally true of Olympians’ reactions to the place they earned on the podium (e.g. Exhibit A, Exhibit B, and Exhibit C). So much so that psychologists went ahead and study this phenomenon, and later, as they often do in academia, gave it important sounding name: "counterfactual thinking." These studies find that bronze medalists are by and large are happier than silver medalists in post-competition interviews and during medal presentations. Their theory is pretty intuitive: the third place finisher compares himself to the rest that didn’t make it to the podium (Hey, I least I won a medal! *smiley face*) while the runner up compares himself to the winner and feels he came up short (Man, if only I touched the wall about 0.004 second faster… *frowny face*).

This, to a certain degree, applies to the Premier League as well. When Sergio Aguero drove home that stoppage-time winner at the Etihad Stadium to crown Manchester City the champion of England last season, the mood in the third place Arsenal camp, what’s with the automatic qualification to the Champions League*, was probably way livelier than the mood in the red side of Manchester.

*Perhaps ‘getting on the podium’ metaphor captures the CL qualification by league position better than ‘winning a trophy,’ huh Mr. Wenger sir?

There are still 12 games left to play this season, yet one inevitably feels that Manchester "We Love Grinding Out Results More Than Anything Else" United, with 12 points clear at the top, has already have the trophy wrapped up. So when Chelsea travel to Etihad Stadium this Sunday to battle Manchester City with only 4 points separating the two, the league title is not as much at stake in the game as the tragedy of the runner up and the triumph of the third place finisher. In a world where there is only one spot at the top, such are the narratives… of losers.

Manchester City's default formation is a 4-4-2. You can fancy it up and call it a 4-4-1-1 or a 4-2-3-1, but the bottom line is that City plays with two strikers up front with wide men in support and defends with two banks of four (i.e. Walks like duck, quacks like a duck etc...). They like to, if they could, have the ball and create chances through buildup play with David Silva pulling the strings while roaming freely across the attacking third, but you already knew that, didn't you? Their fullbacks often join the attack. From the double pivot, Yaya Toure will most definitely venture forward Frank Lampard style while Gareth Barry/Javi Garcia stays back with defensive duties. Again, these are things you probably already know. But there are some interesting things happening within this City system in the micro level that we can talk about that won't render this scout report superfluous. So let's talk about overloading the flanks. 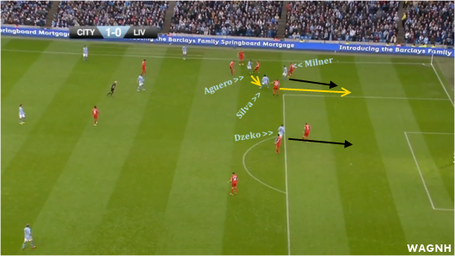 Roberto Mancini's men have been quite successful at breaking down defenses by overloading one side of the wing with the wide man from the opposite flank crossing over to join the action. (This is not new to us, of course, we have seen Chelsea do that as well.) Often it is the nomad playmaker Silva who would drift, from his initial left wing position, across the attacking third to create overloads but there can be exceptions.

The screen cap above shows the buildup to City's first goal against Liverpool a few weeks ago. Here, it was right winger James Milner who had joined the left wing overload. A little bit of tiki-taka from Sergio Aguero and David Silva would set Milner free down the right flank, with Edin Dzeko making a run toward the six-yard box to tap in the cross. It was not even that Liverpool were out-numbered in that left wing but the vision and passing of Silva combined with the movement of Milner helped create this goal. I guess that just shows you how dangerous they can be from these overloads.

Another thing to note from that screen cap is the movements and positioning of City's forwards. In this case, Aguero moved out wide while Dzeko stayed central to spearhead the attack. It is not unusual for one of these forwards to drift wide or drop slightly back into midfield when space opens up while the other one stay central as the main striker. This is when City's 4-4-2 wanders into 4-2-3-1 territory. 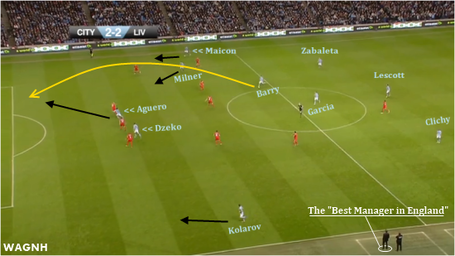 While Rafa Benitez resorts to furious note taking and later making like-for-like substitutions* when the game's not going his way, Mancini would actually make meaningful substitutions and tactical changes. (Wow. So refreshing, I know.) He had played around with 3-5-2 at the beginning of the season with mix results, but now, the Italian is using it as a Plan B.

Aleksander Kolarov and Maicon were brought on in the second half against Liverpool as City switch to 3-5-2. The above picture neatly captures City's 3-5-2: wing-backs advance down the flanks and Milner joins his two strikers from central midfield. While this switch didn't turn the game around completely, it allowed City to have more numbers in the center of the pitch and have better control of the game.

Secondly, the above screen cap shows the intelligent movement of Aguero who slipped behind the Liverpool defense to get on Barry's long pass before scoring the equalizer from an impossible angle. Having seen the likes of Adam Le Fondre and Shaun Maloney exploit Chelsea's defense with similar diagonal runs, Chelsea fans can only hope that the Argentinian has a bad game on Sunday. 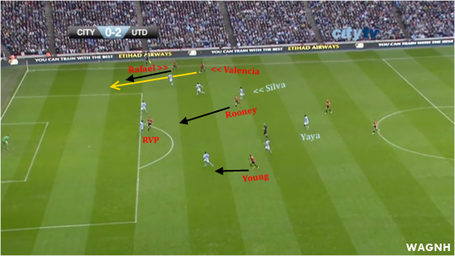 In his analysis of the City 2-2 Liverpool game, Michael Cox points out that City's defensive problems were down to the open space between their lines where the likes of Luis Suarez and Daniel Sturridge could cause damage. "The problem," Cox explains, "originated from the lack of pressing high up the pitch -- aside from a quick burst at the start of the match -- Sergio Aguero and Edin Dzeko contributed little in the defensive phase of the play." This meant that Garcia and Barry had to push high up against Liverpool central midfielders, leaving open space behind them.

That was also the case in their 2-3 home defeat to Manchester United back in December. For the majority of this game, United played on the counter and they were very effective. Above is the screen cap of the buildup to Wayne Rooney's second goal. The Red Devils broke quickly down the right flank while Rooney dashed toward the 'D' of the City box unmarked. The England striker had the time and space to bury the ball into the net with Rafael providing the cross. Let's hope Mancini's men haven't learned their lessons and Juan Mata can punish them for it. (Please let this come true. Please!)

One way to judge a player's worth to the team is to watch how the team performs with that player on the pitch. Another is to see how the team does without him. Well, we have been able to make observations from both of these angles (Thanks, ACN!) and have come to find out how crucial of a role Yaya Toure plays in this Manchester City team. There are more flashy players in the squad but the team just doesn't perform as well without him. He can't create from a deep midfield position like Xabi Alonso, but his physicality, energy and finishing make him a threat. He has a little bit of Ramires (i.e. pace and stamina) and a little bit of Lampard (intelligent movement and shooting skills) in his game. When he makes a marauding run forward, it's like Treebread charging at Isengard*, only with a lot more speed in the Ivorian's case.

The Tragedy and Triumph of Losers

Football can be complicated sometimes, but there isn't anything complex about winning and losing. In the league, there can only be one champion, and either you are or you aren't. Simple. Here's a quote I really like from Roberto Mancini: "If you win you are the best, if you lose you are not." As far as I am concern, the title is pretty much United's at this point. This Sunday, City and Chelsea will fight for scraps, to be the better loser of the two.