Share All sharing options for: Chelsea Chelsea themselves at St. James' Park

On December 1st, Chelsea were 1-0 up against West Ham United at Upton Park and absolutely flying. They lost 3-1.

On January 16th, Southampton were being beaten 2-0 at halftime thanks to goal from Demba Ba and Eden Hazard. It was at Stamford Bridge. The final score was 2-2.

On January 30th, Chelsea had a 2-0 lead against Reading in the 87th minute. Two late goals from Adam le Fondre saw the Royals grab a draw.

And today the Blues turned a 2-1 lead against Newcastle into a 3-2 loss.

Seriously, what in the hell is going on? I was ready to praise Rafa Benitez for a halftime talk that saw Chelsea fired up and overturning a 1-0 deficit within the first twenty minutes of the second half, and then they rolled over and presented themselves for a disembowelment from a Newcastle side that was only happy to take full advantage.

Credit Newcastle for fighting back despite seeing their lead evaporate -- they played well and some of their new signings were hugely impressive -- but the simple fact of the matter is that Chelsea blew this one. Moussa Sissoko's equaliser was a page straight out of the how-to-beat-us textbook. Draw the pivot up the pitch. Have the centre backs do something ridiculously rash*. Score a goal. Simple. And simple to stop.

*Ok, normally this is David Luiz or Branislav Ivanovic.

That Sissoko was the game's most influential player was incredibly irksome. Smug pundits are going to talk up Newcastle's great scouting network, but buying the best player in Toulouse's squad wasn't exactly a difficult call. The question, however, is how the hell Michael Emenalo didn't make a move like that. Newcastle have less money and less need than Chelsea do, and yet it was their new central midfield signing who made the game because our one didn't funning exist.

I guess this hasn't been much of a match report so far. So here goes.

Chelsea began the match poorly, although they had some good chances to score. Frank Lampard volleyed over after great work from Ashley Cole, and despite the Blues not being so good in possession they should have taken the lead when Demba Ba cruised past Fabricio Coloccini and fired towards the far corner.

Instead, Tim Krul made the save, the ball bounce back to Ba, analthough he managed to get his head on the rebound, the ball trundled just wide of the post... and Coloccini kicked his former teammate in the face. Really quite hard. It should have been a penalty, but whatever. Breaking Ba's nose is apparently completely cool in Howard Webb's eyes. 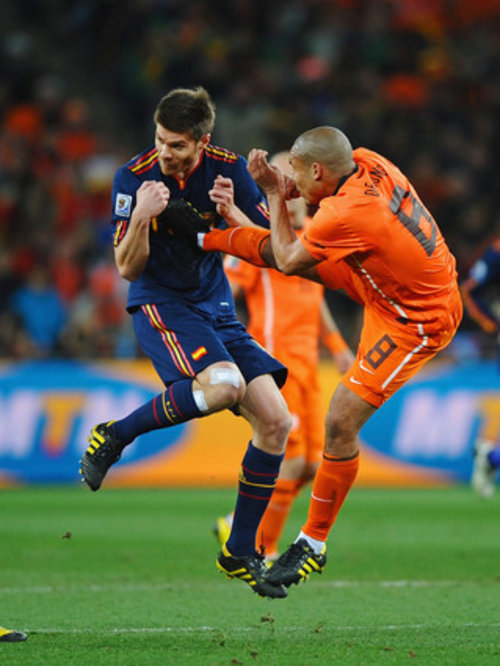 I probably could have made that picture smaller but I actually enjoy everything about it, so hey. Anyway, Fernando Torres came on for the rather unhappy Ba, and Jonas Gutierrez scored with a header after Davide Santon skinned Branislav Ivanovic, who turned like the footballing equivalent of an overloaded oil tanker as he watched the young fullback dance past him.

Life wasn't feeling very good at this point, but it improved in a hurry after the break. Lampard made up for his early miss by showing Yohan Cabaye what was what with a deft touch before giving Tim Krul a big old sad with an unstoppable shot from just outside the penalty area.

Juan Mata, apparently pissed off that Chelsea had scored a goal without his direct aid, made it 2-1 moments later after a deflected cross allowed Fernando Torres to lay the ball off to his much more fun compatriot. The goal was lovely, perhaps even better than Lampard's, and it was clearly going in was soon as it left Mata's left boot.

Suddenly Newcastle were on their heels. Oscar could have earned a penalty when bursting into the box, but the young Brazilian opted to stay on his feet and cross for Mata, which didn't work particularly well. Then Lampard came close again with a header, hitting Krul in the chest when it seemed easier to score.

The stage was set for Chelsea to banish the demons of Reading by coming away from St. James' Park with an impressive win. Instead, they got Sissokod.

So it goes, at least as of late.

Newcastle vs. Chelsea: What a shock, Chelsea lose to Newcastle