Fernando Torres and the Art of Terrible Finishing: The Squeakquel

Scoring goals is easy, ain't it?

Share All sharing options for: Fernando Torres and the Art of Terrible Finishing: The Squeakquel

Two years, two weeks, and two days, that's how long Fernando Torres has been a Chelsea player. And by player I mean a source of controversy, narrative, and a dividing line in the fan base. Never mind his astronomical price, his headband, or his newfound gingerness, hardly a day goes by without an argument springing up about his attitude, his technique, his abilities ... or lack thereof.

Two years, two weeks, two days ... 109 appearances, 27 goals. Fourteen in the league from 72 - better than Shevchenko, if only by about half a percent. He's been at the club for about 750 days, which is coincidentally also the number of different excuses he, his agent, his dad, his current teammates, his ex-teammates, hobos like Yossi, his manager, and his fans have used to explain his utter failure of expectations.

But that's neither here, nor there. I find it hard to care much at all about the ol' Fernando debate, or his travails and excuses-a-minute anymore; call it beaten fan syndrome. He is a known quantity, he's not someone for whom I have hopes of different, better things to come. You see, he's dead to me, and has been for at least a year. And so, just like Private Blithe, once you accept that he's already dead, you can move on.

Torres's first year at Chelsea was marked by some of worst finishing for a striker in modern history - and I say this with the confidence of having seen the likes of Chris Sutton, Andriy Shevchenko, and Mateja Kežman "lead" the line at Chelsea - with just three league goals to his name. His second year then, all 11 Premiership goals included, counts as an improvement. Having perfected the Art of Terrible Finishing in the first 12 months, let's see how freshly resurrected Zombie Torres has fared in the second 12 months.

Of course, it's still mostly bad with respect to his career. 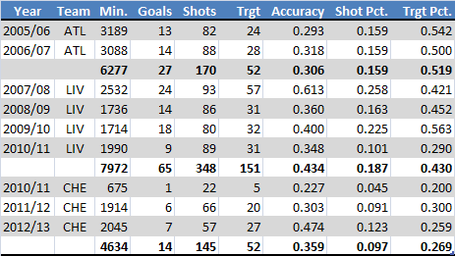 While he's at least getting his shots on target, most of them end up just like his efforts on Thursday: straight at the goalkeeper, saved, tame, or overly complicated.

When Torres achieved his summer resolution of becoming the default top dog of the striker depth chart at Chelsea, he guaranteed himself plenty of playing time. The 2000+ minutes that he's got already in the Premier League are the most he's logged for any one team since his first season at Liverpool. Unfortunately, his minutes-per-goal ratio is still just the pits. 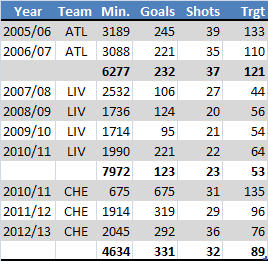 But resurrected Zombie Torres - although still gasping for air trying to come up above that 2010 baseline - is at least no longer as bad as First 12-months Torres. 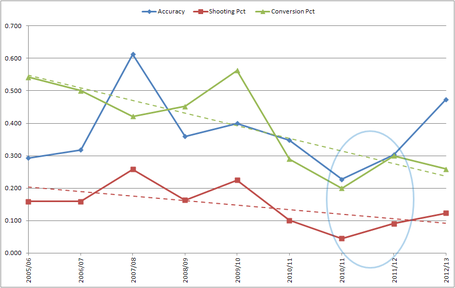 These are the stories of Torres FC.