Their attacking adventures on the left wings left Wigan exposed to lethal Chelsea counter-attacks down that side with Ramires and Azpilicueta running the show.

Share All sharing options for: Chelsea vs. Wigan: Match analysis 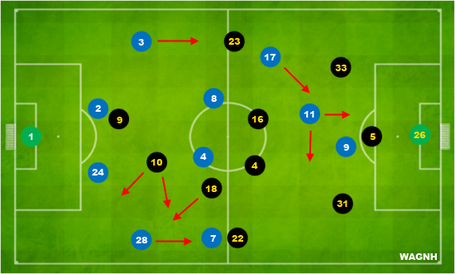 Chelsea made four changes to the team that lost against Newcastle, with David Luiz and Eden Hazard returning from injury and suspension respectively. The Brazilian defender paired up with Lampard in central midfield while Ramires moved out to the right wing alongside Oscar and Hazard in the attacking third. Ramires’ presence on the right wing played a crucial role in this victory but it is not certain whether it happened by chance or by design.

One would assume that the Brazilian long-distant sprinter, who had never started on the wing* in the previous 13 league games under Rafa Benitez, was used in the three-pronged offense behind Torres only because virus-stricken Juan Mata needed to take a breather on the bench. But the interim manager implied in his post match comments that Ramires-as-right-winger was part of his tactical plan: "… we moved Ramires to the right. That was crucial for us as we knew they would play with three at the back so we knew he would be an important player." And so it was: Ramires started on the right to make a big impact in this game.

*The Brazilian did play on the right wing in the 2-1 away victory over Everton but he started as the right-sided midfielder in a 4-3-3 which was short-lived.

Having Ramires on Chelsea’s right flank came in handy because Wigan’s 3-5-2 attack is left heavy. Both wing-back Beausejour and midfielder Espinoza operated on the left while Maloney drifted to that same flank from the advance position. Their five-man midfield dominated possession from the kick-off and built majority of their attack coming down their left wing. You can see this same pattern of play by Roberto Martinez’s men in their last two league games against Southampton and Stoke City as well (see above chart). The very first Wigan attempt on goal came when Maloney, Espinoza and Figueroa combined on their left before crossing for Di Santo whose shot Cech had to block with his feet.

This set up for a busy day for our right-sided players: Ramires, David Luiz and Azpilicueta. And all three put in a strong defensive display: tracking back, winning tackles, intercepting, closing down the space and preventing crosses into the box. Despite seeing more of the ball in the early stages of the game, Wigan didn’t threaten Cech and his broken finger as the Blues defended compactly. Compared to Chelsea’s left side, where Hazard, Lampard and Cole roamed, their right was defensively stronger, and Wigan fans must wonder whether their team was attacking the wrong side of the opposition. 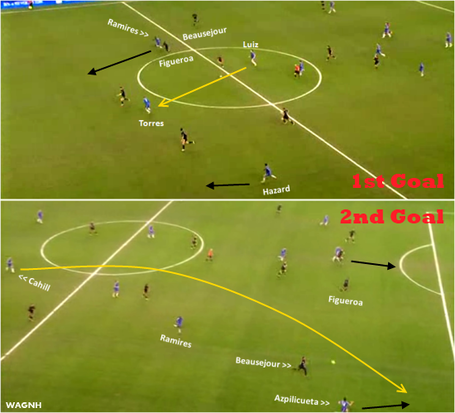 The consequence of Wigan overloading their attack on the left also meant that they are vulnerable on the break on that very same side. With Espinoza and Beausejour further up the field, Chelsea could exploit the space on that flank with the pace of Ramires on counter attack. This was exactly how Chelsea scored the first goal: David Luiz glided past Espinoza in midfield before finding Torres who unleashed a pass right into the path of the Brazilian roadrunner. Ramires exploded past Figueroa and scored with a decisive finish. (Beep! Beep!)

Individual brilliance from Azpilicueta would set up Hazard for the second Chelsea goal, but the buildup fit the overall pattern of Chelsea taking advantage of attacking ambitions on Wigan's left. Gary Cahill's quickly taken free-kick flew over everyone and landed into the big hole in Wigan's left for Azpilicueta to dash into. The recovering wing-back Beausejour was easy to beat for the Chelsea right-back who laid a low cross which Hazard put away convincingly. 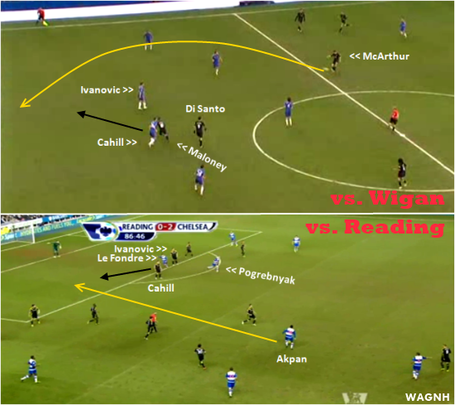 Staying true to their recent form, Benitez's men would allow the opposition back into the game, in this case, pretty much right away. After a Chelsea attack broke down on their left, Wigan midfielder McArthur picked out a diagonal run by Maloney with a ball over the defense. Having sneaked past the two Chelsea central defenders, Maloney then went around advancing Cech to score from a tight angle. It was a simple attacking maneuver, one which had hurt the Blues before. Reading scored the same kind of goal against Chelsea in their comeback led by Adam Le Fondre at the Madejski stadium, Hope Akpan picking out Le Fondre's diagonal run behind Cahill.

In both of these goals, one of the Chelsea central defender is focused on the opposition's main striker (Cahill on Di Santo and Ivanovic on Pavel Pogrebnyak) while the other strike partner slips in behind the defense to receive a pass from midfield. These are simple 2 v 2 situations. Yet, the Cahill and Ivanovic were fooled by the movements of the attackers in very similar fashion. This is something they would need to improve as a center-back pairing.

The Latics would get the momentum from this goal and put more pressure on Chelsea. Espinoza made way for Arouna Kone as Wigan changed to a 3-4-3 shape in their search for an equalizer. Benitez, rather curiously, appeared to be lining a Cahill-to-Mata switch as if Chelsea were chasing the game (David Luiz to drop back to defense and Ramires to be in central midfield probably) but Oscar's cramp pushed the manager to make a more straight forward substitution as the Mata came on for the Brazilian attacking midfielder. The intended substitution would probably have crippled Chelsea's strong defense on the right side. 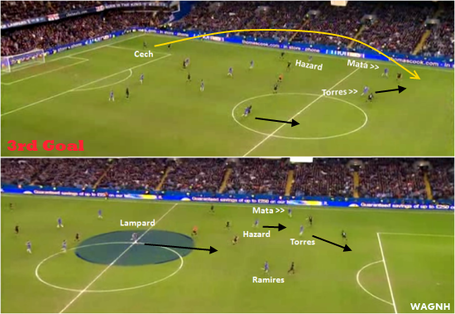 But Chelsea would put the game away with another long ball catching Wigan on the break. This time, it was a hopeful ball forward from Cech towards Chelsea's left wing. Fernando Torres, who was having one of his better games, drifted wide to win the header against Gary Caldwell and nodded the ball to Mata. In fact, the blond Spanish GOAL/SEX MACHINE won 4 of his 7 aerial battles in this game, almost scoring twice with headed efforts, which is a great improvement from his performance against Reading in which he won only 2 of the 10 aerial battles.

More than a month ago, Chelsea lost 1-0 at home to a relegation-threatened Queens Park Rangers. Now they have beaten Wigan who are second to last in the league. Does this indicate an improvement in Benitez's team? Not quite.

"I had to stretch the game, open up and leave ourselves exposed and on the counter-attack Chelsea took advantage of that," explained Wigan manager Roberto Martinez after the game. He is right. The Blues' goals, and ultimately the victory, came because of Wigan's willingness to attack and take risk. Between that QPR game and yesterday's encounter with Wigan, Chelsea have had problems breaking down defensive teams and they tended to get caught out on counter-attacks. There is no sign that these issues have been sorted out, at least not in this particular game, in which Chelsea played a reactive game to secure the three points.

In a shocking turn of events, Chelsea defy all odds and win a game they led 2-0 at home