Who should Jose Mourinho be using to lead the Chelsea line?

Chelsea aren't getting enough production from the strikers on the roster, but one of the three options would appear to be more useful than the rest

Share All sharing options for: Who should Jose Mourinho be using to lead the Chelsea line?

During the summer transfer window, Jose Mourinho was clearly hoping to land Manchester United striker Wayne Rooney to spearhead the Chelsea attack. While we ultimately failed in that pursuit, it brought to light the manager's belief that our current striking talent struggled to work well in tight spaces.

Mourinho's plan B was to bring in Samuel Eto'o, but thus far the goal total from our strikers has been disappointing. We've now played 20 combined games between the five Champions League group stage ties and our 15 Premier League matches, and our strikers have accounted for just 9 of our 41 goals. Because the squad that plays predominantly with a lone center forward, a lower than average reliance on the strikers is definitely to be expected. We'd still all like to see more goals from the strikers though, so I've decided to take a closer look at all three.

Yesterday a discussion in the comments got me thinking about shot frequency, so I decided to do some relatively simple math and figure out how often each of our options shoots. I excluded the data for both the UEFA Super Cup and League Cup, as not all of the statistics I'd eventually need were readily available. Here's how frequently each player has shot the ball during the course of our 20 Premier League and Champions League contests: 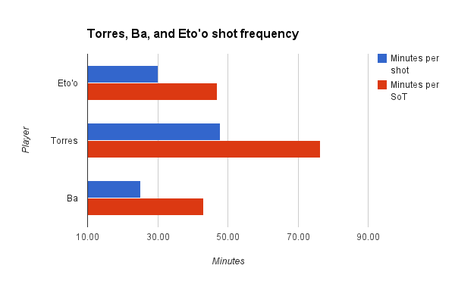 The conclusion to be drawn from this seems simple enough, as the data is pretty straightforward. Demba Ba shoots more frequently than Samuel Eto'o, while both leave Fernando Torres in the dust. With all three putting a similar percentage of their total shots on target, that disparity in frequency tells us the same.

One thing that's certainly worth noting here is that both Torres and Eto'o have a similar number of minutes, and both have seen similar use in Mourinho's starting lineups and as late subs. Ba has appeared most frequently off the bench (and seen significantly less total minutes), often in situations where the club are chasing a goal. If Chelsea are generally chasing a goal in his appearances, it would seem likely that they'd be pushing forward and taking more chances.

With that in mind, I've decided to take a look at how frequently the club shoots when each striker is on the pitch. I've also included the club's shooting frequency on the whole, taking the entire 1800 minute sample into account. Here's what it looks like: 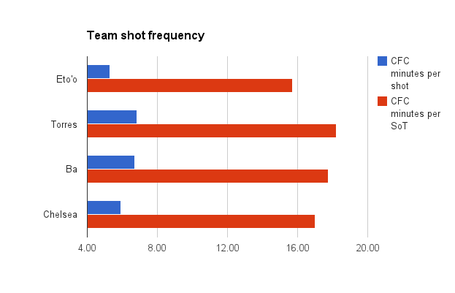 I have to admit, I wasn't too surprised when I broke this data down. When Samuel Eto'o is on the pitch, the Blues shoot more frequently and put more shots on target than they do when he's not involved. When either of Chelsea's other two strikers are involved, we end up with less frequent shots and less frequent shots that test the keeper than we do when they are on the bench.

While the three Chelsea strikers have all played with the same basic talent around them and using the basic system, there is a bit of a discrepancy with the competition they've played that should be noted. Fernando Torres has seen the bulk of the minutes against the better Premier League sides we've faced, and some slightly lower shot totals from the club as a whole would be a reasonable expectation because of that. It's almost certainly not enough to explain the vast differential in individual shot frequency, but it should probably be considered when looking at the team's shooting total when he's been on the pitch.

That taken into account, it still seems pretty clear from the data that the Blues attack is creating more chances with Samuel Eto'o on the pitch than with either of the other options. With Demba Ba, we've seen increased shot frequency from the center forward spot while simultaneously seeing the overall shot frequency from the team decrease. That makes perfect sense, as the situations in which he's been used have generally seen our opponent sitting back to defend while our attack simply turned to firing balls into the box in hopes of bundling one into the net.

With Torres, we see a dip in team shot volume as well, though that appears to come more from a decreased shooting total involving the player himself rather than from any effect on the rest of the attacking options. Samuel Eto'o has been giving us a significantly higher shot total than Torres while not showing the sort of negative effect on the rest of the team's shooting that Demba Ba has, and would appear to be the best fit of the three for the current Chelsea squad. It also highlights what the manager saw in Eto'o which made him our Plan B this summer, even if his production is nowhere near what it once was.

If Jose Mourinho was being genuine about not having interested in a striker come January, Samuel Eto'o would probably be my choice to lead the line for the majority of our remaining matches. He's obviously not a long term answer, but he's shooting considerably more frequently than Torres while seemingly fitting into the squad better than Ba. For me, that makes him the best option currently at the club.