John Terry, man of the match?

Share All sharing options for: John Terry, man of the match?

Before we get to the ratings, we need to have words.

Player ratings are an inherently silly exercise.  Trying to distill a player's performance down into one all-encompassing number, a number that's then truly reflective of an objective assessment of the player's performance over the course of the match should sound basically impossible.  Because it should be basically impossible.  It's the football equivalent of unified field theory, the one ring to rule them all, the Captain Planet of football metrics.  Putting too much stock into them as something substantially real or significant would be a mistake.

That being said, they're not entirely useless.  As a relative metric (compared historically or within the particular data set), I find they reflect community sentiment - biases and all - towards individual players quite well.  They put frequent and less frequent commenters on equal ground and thus may even portray a more accurate picture than just the comments themselves.  Some mull over their choices for minutes on end, some vote on first instinct.  Some give 10's for first team debuts and for appearances that amount to little more than testimonials.  Some vote in anger after a loss (ALL 1's) or unbridled joy after a win (ALL 10's).  Some vote on a binary scale, some rarely go higher than 8 or lower than 5.

Above all, for the majority I think, they're just fun.  They provide a platform for discussion.  They may even spark useful debate beyond just the usual "I think 'x' was better", "I think 'y' was better, you numbskull", etc. platitudes.  It's fun to appreciate or re-appreciate excellent performances.  Or at least it should be.  But when people vote like this (and this is only a snippet), it suddenly becomes not quite fun. 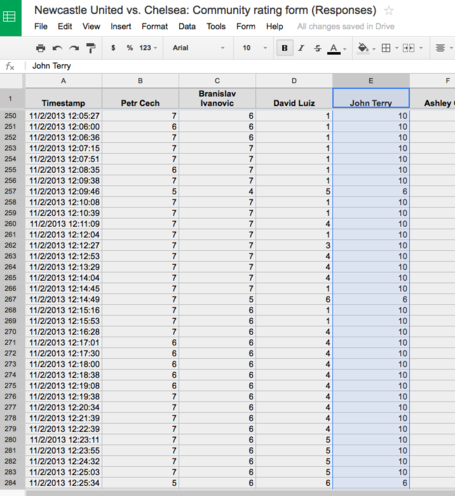 I say "people" but for all I know it was just one person submitting the same basic vote every 30 seconds or so.  John Terry's biggest fan, clearly.  Not one for the curly-haired one though, it seems.  But I have to ask what is the point.  What did you hope to accomplish?  Is this some sort of cathartic experience for you?  Does it bring pride and joy to you and your family that you've successfully stuffed the ballot box at the Matchday 10 community player ratings vote on a random Internet website?

Perhaps this isn't your first time either, it's just the first time of me noticing it.  I don't usually trawl through the votes but this one caught my eye during a quick scroll-through.  We haven't placed any restrictions on the voting forms, nobody's preventing anybody from voting twice, or twenty times.  But I figured we were mature enough to easily do all this within the confines of the honor system.  I'm disappointed and a bit sad to have been proven wrong.

You may notice that there are no ‘facepalms' for any of the goals conceded. While there may be a few deserved ones to hand out on both, it's tough to pin specific blame. Gouffran lost three Chelsea players (Lampard, Terry, Ramires) with his curling run, while Chelsea were throwing everybody forward when second goal came.