Starting with CF Monterrey and the FIFA Club World Cup adventure in Japan and ending with the abomination of a 1-0 home defeat by QPR, here follows the latest update to your community player ratings.

Share All sharing options for: Greeting the new year with the highs and lows in the latest round of your community ratings

With matches coming thick and fast - the FA Cup 3rd Round matchup was Chelsea's 13th already under Mr. Interim - this latest update to your community ratings will once again have plenty to digest. It does not include the Southampton match itself however, as that vote is still fresh and active.

In the seven matches since the last update, Chelsea have lost only once - although that one loss was beyond egregious. Now after today's win, Chelsea have won eight of their last ten. Not too shabby, I suppose, as the general lack of quality opposition is balanced out by the extreme congestion of fixtures.

So, good tidings for the player ratings, right? Lots of green arrows for improving opinions on all the players' performances? Well... 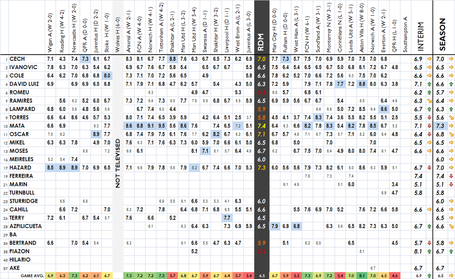 ...not so much. (Fixtures aren't the only things congested, so click to make the chart bigger & readable.)

Only three green arrows have manifested themselves since the last update and one of those comes courtesy of Lucas Piazon's extended cameo in the Aston Villa tonking. It was an excellent cameo, to be fair. The midfield pairing of David Luiz and Frank Lampard are the ones on the up & up, if perhaps a bit hair-raisingly in the case of the former. Hair aside, Sideshow is the virtuoso in the truest sense of the position and often reminds me of the cackling F. Murray Abraham in Milos Forman's Amadeus.

Despite their improvement, neither midfielder - or whatever their actual positions are nowadays - can even come close to Juan Mata territory. Graham says we should appreciate El Mago Juanito more, so here's a whole paragraph about him. Of the 30 rated matches, Mata garnered the highest vote 10 times. That's ten times from 24 starts in fact. Only two other players have claimed man of the match more than twice, Petr Cech with three and Eden hazard with four - and three of his four came in the first three matches of the season. In addition to his consistency, Mata can also lay claim to the only two 9+ ratings this season. We love you Juan Mata!

On the flip side of the arrows of judgement, we have the trio of Fernando Torres, Oscar, and Cesar Azpilicueta. Torres is Torres and let's just leave it at that, but Azpilicueta certainly has cooled off following his hot debut with the new manager. And the dropoff in Oscar's form probably should be more alarming than we're letting on...

Lastly, taking a look at the game averages, these seven matches saw not only by far the highest rated Chelsea performance of the season (Aston Villa, H, W8-0) but by far the lowest rated one as well (QPR, H, L0-1) - both 0.8 points away from the second highest and lowest, respectively. In addition to that inconsistency, also not helping the new manager's cause is that the three worst Chelsea team performances have all come under his watch, in each of his three losses.

As the club moves on from the relatively easy schedule of the holiday period, my hope is that yesterday's second half performance will galvanize them, much like the second half performance at Leeds did. A two-legged League Cup semifinal, a trip to Stoke-on-Trent (on a cold Saturday night), and Arsenal all loom in the month ahead.