Oh, silly season. You're just so silly. With the Demba Ba to Chelsea move imminent, basically everyone's looking around for final confirmation that the Senegalese centre forward has swapped Newcastle for London, giving Chelsea an actual striker for the first time since ditching Didier Drogba and Romelu Lukaku this summer.

But sometimes people jump the gun. Take it away, Sky Sports: 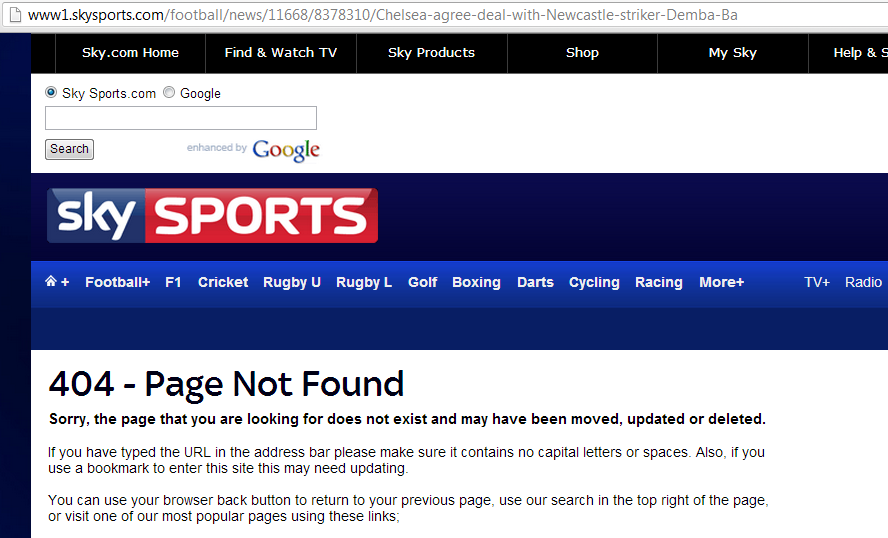 Yep, that's our friends over at Sky Sports.com putting up confirmation of Ba agreeing a deal to take him to Stamford Bridge only to delete it a few minutes later. Is this indicative of anything? No. Is it funny? Yes. Expect the move to be done sometime today regardless, at which point Ba will become the only Chelsea player that I'm not actively furious at for losing at home to Queens Park Rangers.

The current terms we're hearing sound like he'll be on about 70,000 per week on a relatively short term deal, and with the 7 million buyout clause Ba sounds like he'll be pretty cheap on a year-to-year basis. That's pretty perfect for a striker who's already established himself as capable of doing major damage in the league.