Share All sharing options for: Painting the town red with the latest round of your community player ratings

And so we meet again, at the darkest hour. Now, I had thought the darkest hour was at the last community ratings update, the one that ended with the 0-1 home defeat by Queens Park Rangers - a defeat that remains Chelsea's lowest rated match of the season still. Clearly, I was wrong.

The QPR defeat, as egregious as it was, came on the heels of four good-to-excellent victories. There was a glimmer of hope that it was just a glitch in the clock drift of the universe, a random occurrence of pseudo-tragic proportions. We now know that it was just a sign of things to come.

But more on that later. First, the envelopes: 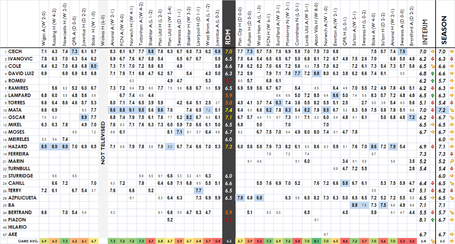 A few observations from this latest eye chart:

I'm sure there are plenty more fun things to observe in there, so feel free to chime in with your comments. And if not, well, chime in anyway and tell me of your homeworld or just how awesome Californication is.

So, back to the sign of things to come. While the seven matches since QPR have brought a few decent results and ratings, the overwhelming trend within that span has been negative. Ratings for both good and bad performances have been dropping faster than Apple stock: average ratings in wins have gone from 7.17 (Southampton (A), FA Cup) to 6.99 (Arsenal (H), Premier League); average ratings in non-wins, from 5.73 (Swansea (H), League Cup) to 5.15 (Brenford (A), FA Cup).

Certainly, there is oodles of bias in all this. Dislike of the manager probably has had a trickle-down effect on player ratings as well. Then again, the loss at Juventus was rated quite harshly, too, so let's assume for a minute that the player ratings - while subjective - are not subjective with respect to the manager. In that case, I present you with the following chart of match averages of the player ratings, color coded blue and red. Roberto Di Matteo obviously gets the blue. 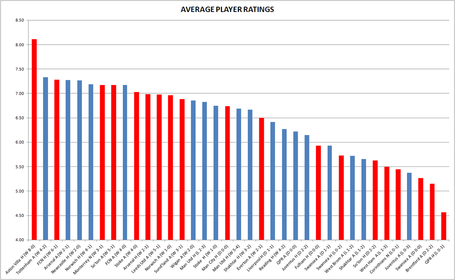 All I've got to say is, if Mr. Interim truly believes that he has any shot of getting the job permanently at this point, he is truly, truly delusional. Surely the board - despite their penchant for Sideshow-esque murder spasms - cannot give the job to the man who has overseen six of the seven worst performances of the season (with two of the non-QPR variety coming in the last two matches), can they?