A blindfolded female figure sits atop a gloomy globe. In her arms, she is embracing a battered harp, all its strings snapped except for one. As she plugs away tentatively at this remaining string, she leans her head right up against the instrument as if to catch every single faint note it sings.

This is the image that Victorian artist George Frederic Watts has beautifully put on canvas. It definitely has a mysterious and arresting quality. Yet it would have just been another ordinary painting if not for its title: Hope. The picture, reputedly painted at a moment of anguish (when Watts's adopted daughter died), is hardly comforting. In fact, G.K. Chesterton, a British author, and an all round smart-arse, once quipped that 'Despair' might have been a more accurate title.

But of course Watts was getting at something very profound by calling it Hope. That an intense form of hope is birthed in moments of despair. That hope is vital in the darkest of days because despair is not a state in which one can exist for long*. Out of courage or of folly (the line between the two is blurry), we hope, we grasp at that single strand to keep us going. And like a dimmed background, desperation sets up for hope to shine.

*Unless, of course, you are a Tottenham fan. BANTZ!!!

So we hope. Despite the sacking of a lovable club legend who tamed the Big-Eared One, despite being kicked off of the competition we just championed, despite Fernando Torres, despite the hiring of a hated figure, despite his "management," despite his excuses, despite being schooled by minnows time and again, despite not winning the "easy" cups, despite not being one of the Thoroughbreds in the annual "two-horse race," despite not having a reliable midfield, despite the home form, we hope. We grip that raggedy harp tight with one hand while picking its solitary string with the other, one note at a time. The last two notes, Swansea and Brentford, almost broke the string, which is still vibrating as we prepare to strike the next: Reading FC.

Brian McDermott’s Reading usually plays in an orthodox 4-4-2, two strikers upfront, two wingers bombing down the flanks and so on. But a string of poor results in December forced McDermott to consider a change in formation. Prioritizing defensive solidarity, he has made a switch to a 4-5-1 in recent weeks with striker Pavel Pogrebnyak aka The Perfect Villain in Every American Cold War Movie leading the attack.

The advantage of having a five-man midfield is that it can be the initial protective shield for the defense. A crowded midfield makes it hard for opposition to penetrate. When executed well, a defensive 4-5-1 can withstand the continuous assault from THE BEST TEAM IN THE WORLD (EVER) over two legs and get you to a major cup final*.

*We know what we are…

But ironically, the Royals have not been any good defensively despite the change of shape. This is mainly due to their poor defensive organization. Both West Brom and Newcastle, Reading’s most recent league opponents, were able to dominate the game and create chance after chance. Here’s an example from Reading’s home game against West Brom.

This is the buildup to Romelu Lukaku’s first goal. Instead of covering the central midfield zone alongside Daniel Carrico and Danny Guthrie, Jem Karacan moved out of his position to press high on the right. As often is the case, pressing is not a problem here but disorganized pressing is. Carrico was not able to fill in the spot left by Karacan on the inside right, allowing West Brom a direct route to Lukaku with a simple forward pass. From his attacking midfield position, James Morrison would support Lukaku in attack; two passes later, the ball ended up in the back of Reading’s net. This, perhaps, highlights the importance of organization in defense no matter what the formation is.

The 4-5-1 has also not been great for the Royals’ attack. Pogrebnyak is often too isolated like a strayed Russian tank. Their attacks and counter-attacks look disjointed. And their every forward adventure leaves them vulnerable on the breaks.

They started with a 4-5-1 against West Brom and Newcastle, played poorly, and fell behind. But, and this is quite a big ‘BUT’, Reading came out victorious in both occasions after making second-half substitutions and changing the shape to 4-4-2. In comes Adam Le Fondre—the connoisseur of "being at the right place at the right time", Mr. Poaching-Is-My-Business-And-Business-Is-Good—in place of a midfielder to pair up with The Pog up top. The team began to attack purposefully down the flanks with targets to cross to in the box. The impact of the change was more instant against Newcastle but it didn’t fail to get Reading out of trouble in both games.

There are other factors in play in these come-backs of course. The opposition tends of take their foot of the gas when they are ahead, especially in the later stages of the game. There were also the element of luck and the overwhelming force of momentum to consider. But it seems reasonable to suggest that Reading plays better as a team in a 4-4-2. It is now up to Brian McDermott whether to stick with the current "winning" strategy, start with a 4-5-1 and make a second-half switch, or send his team out in a happier 4-4-2 from the kick off. My guess is that they will persist with 4-5-1 against Chelsea and make changes only if they fall behind.

Pogrebnyak and Le Fondre have scored a total of 6 goals (three each) in the last 4 league games, but it is the right winger Jimmy Kebe who is in the spot light in this preview for two reasons. First, Reading's attack depends on the movement down the flanks and good delivery into the box; Kebe provides both. Second, Chelsea, when playing without a defensive winger, suck at defending in the wide areas against pacey wingers (see under Walcott, Theodore).

This was a traditional wing play from Reading against Newcastle in the buildup to the equalizer. Kebe positioned wide on the right, looking for a long pass in behind the defense, which Mikele Leigertwood was happy to supply. The Mali international beat the fullback with speed and slipped a low, inviting cross into the box; Le Fondre would le flounder onto the ball and scored. Simple and effective. 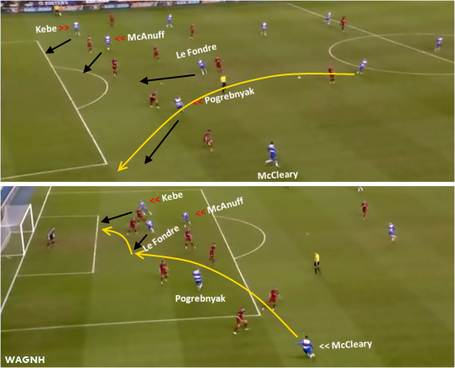 Kebe is a relatively big fella as well and can be a dangerous presence in the box when the attack comes down the other flank. Here's what happened against West Brom. Again, the ball was sprayed to the wide area from central midfield, the Top Pog drifting wide to pick it up this time. When Garath McCleary whipped in a cross, Le Fondre attacked centrally, le feinting the ball through his legs, while Kebe arrived at the back post to nod it into the goal.

There is nothing complicated about these attacks, but they can, and will, punish a defense that is not on top of its game.

Of music or beautiful things