The other day, there was a short discussion in the comments regarding Demba Ba and Robin van Persie and how they've both made a habit of not only scoring lots of goals but scoring lots of crucial goals this season. Of course, Demba had done most of that in the colors of Newcastle United but people had been paying attention nonetheless. And van Persie has led Manchester United's charge to a healthy lead at the top of the table, much to the chagrin of everybody else but especially Arsenal fans.

The concept of game-changing goals (GCG) was brought up to try to settle the debate. While Al Benson had a quick look, I've decided to investigate as well. GCG, as you'll recall, is the simple approximation of the win probability added by certain goals. The important goals, that is, the ones that change leads, match situations, match outcomes and the associated point distributions. I tweaked it slightly this time around to provide additional detail, if not additional accuracy of importance.

Previously, we talked about only lead-changing and game-tying goals factoring into GCGs. While this is still very much the case, I've now broken them out to three different types: opening goals (the first goal in a match), game-tying (same as before), and lead-changing (goals at scoring draws, i.e 1-1, 2-2, etc.). For Fernando Torres in Barcelona fans, I've also looked at goals that increased the lead to 2 (+2 goals; PTG) and goals scored at 2-goal deficits (-2 goals; MTG). Since such goals usually add a significantly less amount of win probability, they won't exactly count as GCGs. Let's call them almost game-changing goals: AGCG. GCG+ can then track the sum of GCG and AGCG.

To level the playing field, only league goals* were counted. First, let's have our two protagonists come up:

They couldn't really be any more similiar than that, could they? Van Persie has scored more goals, but one could make the argument that due to United's helter-skelter approach to matches nowadays, he's been afforded more opportunities to, literally, change the game. Looking at just the percentages, we can say they both have an uncanny ability to score at the right time. Or looking at it another way, when they do score, you know it's an important goal.

Demba Ba's opening goal vs. Southampton is so far his only (Premier League) GCG that has come in Chelsea blue but if he can maintain his Newcastle form, frequency, and timing, we should be in for a treat.

Since we're here, let's broaden the field and look at all players with at least seven goals in the league. Seven was arbitrarily chosen to include a few interesting names stuck on just that amount, including none other than ol' Fernando: 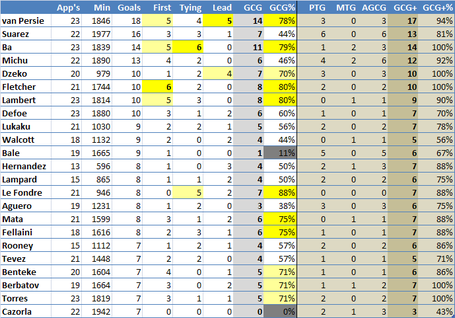 Certainly nobody should be surprised that the likes of van Persie, Ba, Juan Mata, Marouane Fellaini, Edin Dzeko, Christian Benteke, or Dimitar Berbatov are at the top when it comes to scoring important goals.

Others may surprise a bit, such as Fernando Torres. Not many goals, mind you, but generally important ones - a drastic change from last year at least in that aspect. Or how about Steven Fletcher, Rickie Lambert, and Adam Le Fondre. They all play for abject teams yet still greatly influence match situations and outcomes with their goals. Contrast that with the likes of Luis Suarez, Theo Walcott, or even Michu - all of whom play on decent enough teams yet their goals are perhaps not nearly as crucial as many would make them out to be.

Spare a thought for Santi Cazorla who has yet to score a true GCG in seven tries. Sergio Aguero also sticks out like a sore thumb, but I suppose he has earned himself a free pass with that LEAGUE-winning goal last year. No mercy however for Gareth Bale, the great Welsh hype - master of the second goal with five, just one behind Grand Master Suarez.

To further illustrate just how drastic the gap is between Bale and the rest of the top scorers (excluding Cazorla), let's look at minutes-per-GCG: 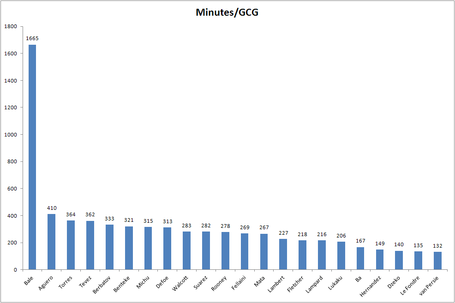 If you shift your gaze to the non-Bale end of this chart, you'll find the true game-changers: the now usual suspects van Persie, Le Fondre, Dzeko, and Ba, along with Javier Hernandez (but of course), Romelu Lukaku (warms the heart, really), and - pause for reverence - Frank Lampard. Super Frank, indeed.