Chelsea dominated the game in the first half, passing quickly and moving purposefully. Arsenal improved drastically after the break, but the home side hung on to take all three points with a narrow 2-1 win.

Share All sharing options for: Chelsea vs. Arsenal: Match analysis 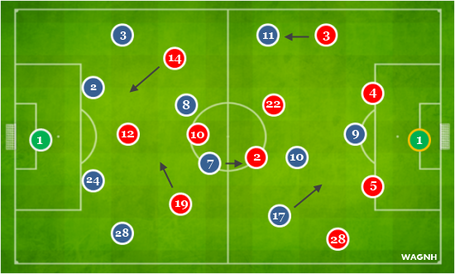 With David Luiz enjoying life just a little less due to injury, Rafa Benitez had other choice but to use Lampard and Ramires in the double pivot. I’m not sure if Ramires would have been picked otherwise, but the Brazilian made the difference in this game. His energy, pace and aggressiveness unsettled Arsenal’s midfield.

Further forward, the trio of Oscar, Mata and Hazard buzzed around the attacking third behind Torres (OMFG!! HIS HAIRRR!!!). The same three attacking midfielders started against Southampton, but this time with a little twist: Oscar, who usually plays on the right, now operated mostly on the left, and Hazard swapped to the right flank. The three creative players often switched positions, but interestingly, the player in the middle tended to drift to the right while the one on the left stayed wide (more on this later).

Arsene Wenger trusted the same team that started against Swansea in the FA Cup: Cazorla switched to the left, Wilshere put in the hole, and Coquelin partnered Diaby in central midfield. Mikel Arteta was not available for this game (possibly still dealing with post traumatic stress disorder instigated by Oscar’s relentless hounding in the reverse fixture) and Arsenal will miss the Spaniard’s calm passing and positional discipline. Cazorla and Walcott pushed up high and were of very little help to their fullbacks when Chelsea attacked in the first half. But Walcott’s diagonal runs from his wide position posed problems to the Chelsea defense in both sides of the break.

From the kick-off, Chelsea stormed out with an intensity of a bull determined of buck off the rider on its back*. They pressed and chased the opposition down fiercely, and moved the ball quickly from defense/midfield to attack with great efficiency.

*This, y’all, is probably the most American/Southern metaphor I’ve ever come up with. Yeehaw! 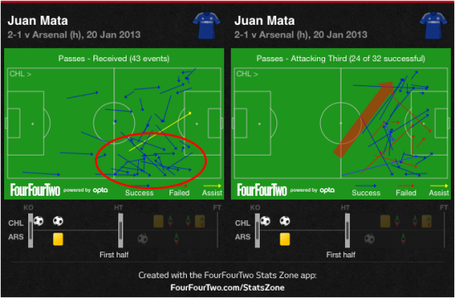 Chelsea had a clear pattern of attack in the first half and it is neatly illustrated by the passing charts of the influential Juan Mata. During the first 45 minutes, Mata received short passes frequently on the right flank as he worked together with Hazard and Azpilicueta, but he would then switch the ball to the left with diagonal passes. Buildup on the right, change point of attack quickly to the left. With Arsenal right-back Sagna pushing forward and the right-sided center-back Mertesacker moving at the pace of a depressed tortoise, Chelsea wide players on the left had the time and space to collect the long passes and attack the Arsenal goal.

Another key point from the first half is the role of Ramires as the play-breaker in midfield. The Brazilian is not a great passer but his pace and energy makes him a perfect off-the-ball midfielder. He can press, chase and tackle with seemly endless vigor, shifting between the "running" gear and the "running really fast" gear. He is not suited for the double pivot role when Chelsea needs to control possession (*ahem* foreshadowing *cough*) but he is ideal player to torment a newly assembled Arsenal midfield, untested by counter-attacking Swansea side in midweek. Ramires was the top tackler at half-time (3 successful/6 attempts) and at full-time (5/9). 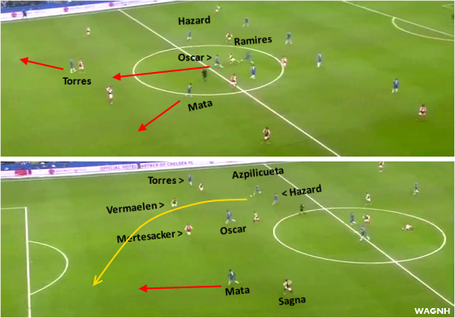 This attacking pattern of switching quickly from right to left and hard-tackling from Ramires combined to create Chelsea’s first goal. Ramires plowed through Coquelin to win possession for Chelsea at the center circle. Azpilicueta picked up the loose ball and countered quickly. Torres, who was marked by Vermaelen, started to drift to the right wing. Meanwhile Oscar advanced forward from the center in a slight angle toward the right, drawing the attention of Mertesacker. With Sagna out of position on Chelsea’s left, Mata had the leisure of floating into the big gap between Mertesacker and Sagna. Azpilicueta’s delivery was great, Mata’s first touch and finish were even better. Just like that, the home side were 1-0 up.

Chelsea continued to boss the game until the break; another strong challenge from Ramires in midfield would set up the second goal for the Blues. 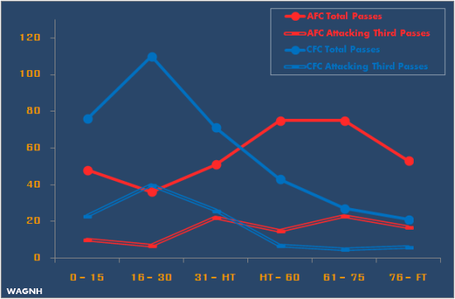 Day and night. Jekyll and Hyde. Scotty Parker and Mario Balotelli. Pick your favorite metaphor! The second half was the complete opposite of the first. There wasn't any tactical change from either side, but Arsenal came out of the break with more determination and their overall game improved. They passed better, moved more purposefully and won 50-50 challenges. This turn of tide is captured accurately by the passing timeline above. Chelsea's passing line dropping off after half-time and crossing Arsenal's like an 'X'. The Blues had 9 goal attempts before the break and 5 after; the Gunners 2 before and 10 after. 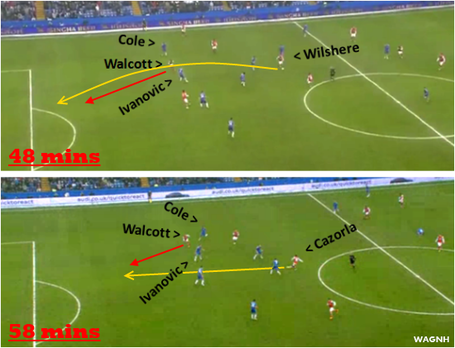 As highlighted in the scout report by one handsome (and very smart) gentleman, Walcott was the main attack threat during this Arsenal ascendancy. The winger, bravely fighting off a serious case of Sturridgitis, was handful on Chelsea's left. He often starts his run from the wide position and attempts to get behind the Chelsea line with diagonal runs. The home side's offside traps eliminated this threat in the first half, but the timing of his run was got better.

The first warning shot came around 48th minute. Wilshere, quiet in the first half, picked up the ball in a deep position and lobbed the ball over the Chelsea defense. Walcott, positioned between Cole and Ivanovic, slipped behind the line. His shot from a tight angle was saved comfortably by Cech. Almost exactly the same kind of move would split the Chelsea defense 10 minutes later. This time Cazorla was the provider, threading a delightful pass between four Chelsea players. Walcott again glided in between Cole and Ivanovic to collect the pass and smashed the equalizer* into the net.

*Intentional mistake to see if you are paying attention. Nah. Just kidding. I was just stupid. This is a correction or whatever. 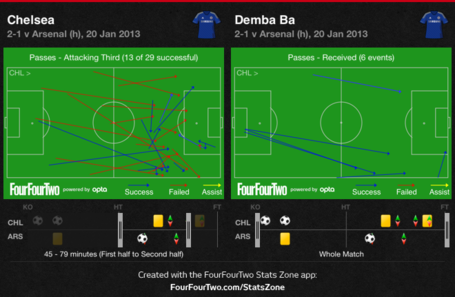 In a big match like this, it is not unusual (or problematic) to be pinned back in your own half for part of the game, especially if you are already 2-0 up. But in order to come out as the winner, you must be able to defend well and (a) slow down the game through precise passing when you have the ball or (b) break quickly and punish the opposition on the counter. Lampard and Ramires were unable to do (a), the two combined completed 17 passes in the second half. This is because Chelsea had relied on Mata to help out the ball movement from the midfield. Usually, the players in the double pivot finish the game as top passers but this time, Mata topped the chart both at half-time and full-time. A calm presence of a John Obi Mikel in central midfield would have done Chelsea some good in the second half.

Upfront, Torres was also not a reliable outlet for counter attacks. He couldn't get onto the direct deliveries from the back (see chart above) and lost the ball constantly--the Walcott goal came when he was dispossessed in midfield. The sight of Demba Ba warming up on the touchlines spurred Torres on to make some outstanding runs but his end product, much like his haircut, was disappointing.

It was pretty obvious that changes needed to be made, but the interim manager would wait very long to make them. Ryan Bertrand came on for tiring Oscar at 72nd minute and Ba for Torres at 81st minute. The defensive winger helped out Cole on the left and the Senegalese striker offered a viable direct passing option in Chelsea's attack. On a different day, Chelsea could have suffered a setback because of this delay in substitution.

Roman Abramovich's team scrapped by with a narrow win. Aside from the tremendous energy in the first half and the positioning of the three creative players, there wasn't anything particularly new Chelsea: Juan Mata is still the main man (although both Hazard and Oscar were brilliant in the first half); the midfield still can't control the tempo of the game when needed; Torres is toast. In this fine competition called "Who's Worse at Playing Football for 45 Minutes," Chelsea lost out to Arsenal by a small margin. But THREE POINTS!!!