2012/13 Chelsea Statistics: Plus/Minus - Oscar and the rest of the merry band of attackers

Share All sharing options for: 2012/13 Chelsea Statistics: Plus/Minus - Oscar and the rest of the merry band of attackers

No, I shall not refer to them as "MaZaCar." Although I just did, Inception-style. Do not think of the elephant in the room! But that will the one and only reference to any such atrocity, I promise. Don't forget about Part I (overview) and Part II defense), in case any of this draws any of your interest.

No time to waste words; let's jump right in. If I've glossed over anything or if you have a specific player/combination request, feel free to ask in the comments.

In an affliction that seems to be spreading among Chelsea's Brazilian contingent, Oscar's best position seems to be up for debate. Is he a #10, a central attacking midfielder/creator? Can he play on the wing? Or perhaps he should be playing deeper, in the pivot, as more of a true central midfielder? 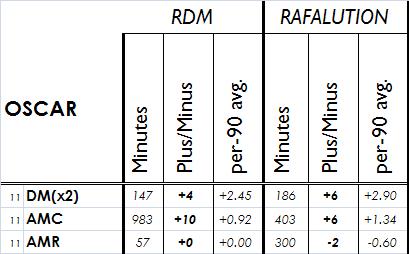 Well, one thing's clear, he should NOT be playing on the wing. The current manager's insistence to deploy him there lately has been the single greatest contributing factor to why Oscar is the only player to have posted a better plus/minus under Roberto Di Matteo.

Oscar may have all the talent in the world, but the team should be utilizing that to rotate the central midfield, rather than forcing him into sub-optimal positions. I don't think his versatility and good results in both central roles is being exploited fully at the moment.

Chelsea have played 3360 minutes of football so far this season. That's 36 90-minute matches and one cup match that went into extra time. They've played 78 minutes shorthanded, scoring once (Ryan Bertrand, in the Community Shield) and conceding four times. Having spent the remaining 3282 minutes almost exclusively in a 4-2-3-1 and with the dazzling array of attacking talent available in the squad, it's no surprise that Chelsea have deployed no less than 35 different attacking band combinations. And that's even without not differentiating for slight positional differences (Hazard-Mata-Oscar vs. Hazard-Oscar-Mata) on the account of the amount of in-game switching and whirly-burly (less so lately, but certainly with RDM).

The 35 combinations do include some rather off-the-wall nonsense, like Paulo Ferreira spending time on right wing or yours truly deciding to classify Frank Lampard as AMC rather than worry about a 4-3-3's pale shadow (14 total minutes - not likely to make any significant difference). Before you ask, the worst combination statistically is Marko Marin - Oscar - Juan Mata, which is a spectacular -2 (0:2) in just 25 minutes of action across three matches. We can thank West Ham for that.

Of the 35 combinations, six have seen more than 100 minutes of pitch-time. These are those six. As alluded to above, the combinations are position-independent (i.e. Bertrand didn't play right wing and Hazard has rarely been deployed centrally on the formation sheet).

Something that may have nagged at the back of your head for some time is indeed true. Mata-Hazard-Oscar, the vaunted assault on the goodness of abbreviations, is not quite the holy grail. Graham told us to beware; for here be dragons and exposed wings. We should've listened. Also, when does Victor Moses come back? Yesterday would've been too late, I'm thinking.

Lucas Piazon, now plying his trade on-loan at Malaga, pops up at the foot of the table but that's just Di Matteo's cup special (6-0 v. Wolves, plus the first bit of the Manchester United redux at Stamford Bridge). Juan Mata is, of course, ever present. Then again, he's ever awesome. Ryan Bertrand, he of zero losses so far this season, shows well in a defensive role.

I thought about working up a Torres chart/table, but there's little insight to be gained. He's been on the pitch a lot and is a +33 in non-shorthanded situations. Unsurprisingly, he's been best in combination with Juan Mata (+30), followed closely by Eden Hazard (+26). The difference is largely due to Hazard actually getting some rest (well, sometimes) in the easier cup matches.

In conclusion, let's look at position-by-position leaders (raw totals). Here's the rundown from last season although I'm not really sure how comparable it is.

That'll do it for this mid-season look at Chelsea's plus/minus statistics. Thanks for reading this far. We'll take a look again at the end of the season. I know, I know, try to contain your excitement.