In my youth, I used to play this tactical first-person shooter game called Counter-Strike. In a tournament set-up, it's a five versus five game, terrorists against counter-terrorists. Basically, you win by killing all your opponents and/or completing your mission, which involves detonating/defusing a bomb . I did it semi-professionally: I had a team; we competed in competitions; we won some; we lost some.

My team was not the most talented bunch but we made up for it with complicated strategies. We came up with specific tactics for each map; we had our Plan A, Plan B, Plan C and Plan D. This gave us an edge over most teams, but not all.

There was this one team (DAMN YOU TO HELL, STAR CLAN!!!) that was made up of all the best players in town, guys who can kill you with a head-shot before you even thought of pulling the trigger. They didn't have complicated strategies like my team, but they didn't need it: they were good at shooting; they improvised and problem-solved as they went. Long story short, my team always came out second best against them.

The morale of this story from my misspent youth is that tactics can only go so far if you don't have good players*. Both Arsenal and Chelsea have struggled this season, and there may be some tactical reasons for this. But these two London neighbors would certainly have done much better if they had a quality striker leading their attack. A player who can turn the game with a deft touch, with an intelligent run, with an unstoppable finish. A player who is good at what he is supposed to be good at. Arsenal sold their best striker and Chelsea kept their worst as the main man.

*You probably know this already, and my story certainly made this intro much longer than it should be, but what the heck!

And here we are, fighting for scraps as the two teams from Manchester keep on marching ahead of the pack. Whoever the manager is and whatever his tactics are, if you don't have good players, you are just going to have to fight for scraps. And after awhile, you will rationalize (because we always do). And finishing fourth will start to feel like winning a trophy.

Downplaying tactics is an unusual way to ease readers into a tactical piece, but whatever. Let's take a look at Arsenal, our fierce rival in this hunt for an imaginary silverware. 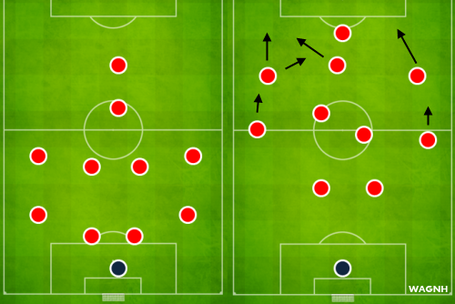 Shape/formation/tactic-wise, Gunners aren't that different from Chelsea. They too defend with two banks of four, use a free-moving attacking midfielder as a connector between attack and midfield, and allow their fullback to bomb forward and join the attack. They like to control possession and attack through clever movement and passing.

But in order for this system to work, Arsenal needs Mikel Arteta running the show in central midfield. Oscar's diligent marking, pressing and tracking of Arteta earlier in the season played a crucial role in the Blues' 2-1 victory. This time around, the Spaniard will be absent through injury. This is good news for Chelsea. Wenger's team is worse off, both in defense and in attack, without Arteta.

Against Manchester City last Sunday, Jack Wilshere and Abou Diaby partnered in midfield, but their natural tendency to press hard against Javi Garcia and Gareth Barry left a gap between the Arsenal lines. David Silva, as Michael Cox points out, exploited that space in front of the Arsenal defense effectively. This should make Chelsea's free-floating attacking midfielders like Eden Hazard, Juan Mata and Oscar jump with joys like starving hobbits who have just been invited to a free buffet with endless supply of ale. (Lord of the Rings reference. Check!)

Against Swansea in midweek, Wenger changed it up: Francis Coquelin and Diaby played in the double pivot, Wilshere pushed forward into the hole, and Santi Cazorla stepped aside to the left wing. Did it work better? Yes. Kind of. But they were also playing against a Swansea team who were happy to sit back and play on the counter, just as they did against Chelsea in the Capital One Cup. So, add salt to taste.

Another weakness in Arsenal's armor (not to be confused with the zipper on Wenger's winter coat) is their defense on flanks. Bacary Sagna and Kieran Gibbs often get little defensive cover from their wingers, especially in quick transition. And these fullbacks like to go forward themselves, often getting caught out when the team loses possession. (Hmmm... I swear God I know a team that has this very same problem. They may or may not know what they are and they may or may not be Champions of Europe. Their name is escaping me right now. Will get back ya.)

Remember how I highlighted Jonathan "Ronald McDonald" Walters in this section of the Stoke City scout report? That worked out well, didn't it? I'm expecting big things from Theo Walcott this time around. Now that the t's have been crossed and the i's... um there are no i's in his name to dot, unless he put "striker" in parentheses next to his signature, on the shiny new contract, Walcott can go back to being an inconsistent player that he was before. But in case the contract-form Walcott sticks around for this coming game, here's a couple of points on the Arsenal man.

After his team were knocked out of the Capital One Cup by Bradford City, Arsene Wenger said 'why the heck not!' and allowed Theo Walcott, who's suffering a rare disease known as Sturridgitis, to start as the central striker. The experiment looked to have worked as the striker-turned-winger-now-back-to-being-a-striker scored a hat trick against a very poor Newcastle United. But as Southampton had shown in their 1-1 draw, an organized defense can isolate Walcott up front and not even care about crosses coming in from the wings. So now, the French international striker, and part-time porn star, Olivier Giroud is back leading the attack with Walcott pushed back to the right wing. 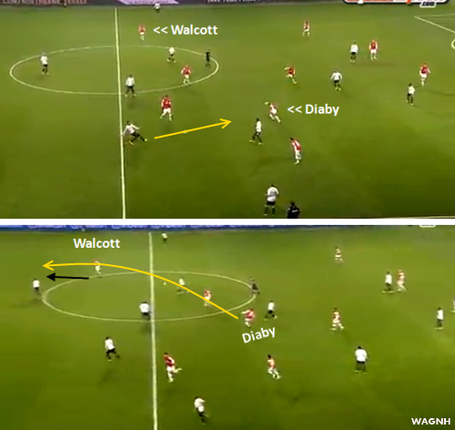 Walcott's pace has caused problems to the Chelsea defense in the past, and it likely to be the case again come Sunday. In the last game, we saw Southampton did damage against Chelsea down the flanks; the wingers failed to help out the fullbacks who were also culpable in both goals from the Saints. Walcott will be especially dangerous on the break, just as he was against Swansea in their midweek 1-0 victory.

Here you see Arsenal defending with two lines. When Swansea made a mistake, Diaby was quick to release Walcott down the right. The striker-wanna-be-but-settling-as-a-winger-again breezed past the last defender and was one-on-one with the keeper in no time. He missed. But the point is that he gets into positions like these and will be a threat. Will he also score two own goals and then miss a penalty? Well, let me just say that legends like Jonathan "Kicks Ball into His Own Face" Walters don't with every generation. But one can hope.

Baseball's Gabe Paul once said, "There is no such thing as a second place. Either you're first or you're nothing." An inspirational quote that demands winning mentality from a team; a quote, sadly for both sets of fans, out of place in this fixture. For Chelsea and Arsenal, even finishing second doesn't seem doable at this moment as they dwell in nothingness and fight for an non-existent trophy that is finishing fourth.