A classic Lampard performance vs. Stoke

Share All sharing options for: A classic Lampard performance vs. Stoke

Against time, everything else loses eventually. It has outlasted the dinosaurs and has patiently watched the Universe expand. Against a beast like this, the detail events that took place over the course of a football match simply have no chance, especially when the next game is just four days away. Performances are seen, live-tweeted, debated, retweeted, favorited, and soon… forgotten #OnToTheNextOne. A few days later, it was just 4 goals to the good, 3 points to the total.

That’s just the way it is I guess; I can't really do anything about it. But it is hard for me to let go of this one. Frank Lampard had one of his classic games against Stoke City as the Blues stormed to a 4-0 victory. In this game, he displayed all the qualities--passing, movement, anticipation, shooting and intelligence--that separate him from the rest. To think that all of this will be summarized by "Frank Lampard (PK)" on the scoreboard, especially at a time when many doubters are quick to throw out the rhetorical question, "Yeah, but how many of those are from penalties?" is disconcerting to say the least.

So here is an attempt to make that which is not permanent last just a little bit longer: an analysis of what Frank Lampard offered to Chelsea's attack/defense against Stoke. It is an appreciation of the greatness we are lucky enough to experience now; a lament of what we may soon miss; and a futile, yet determined, middle finger to the steadily ticking, impassive monster that is time. 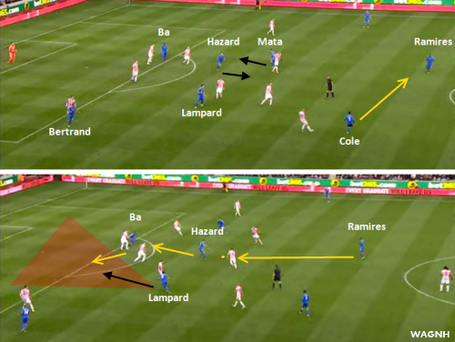 Chelsea were pretty rotten in early stages of the game and their first real chance came only around the 25th minute. And Lampard was in the thick of it.

Juan Mata brought the ball forward, but he ran into traffic centrally, forcing him to square it to Ashley Cole on the left. The Spaniard ran toward the Stoke goal while his creative partner, Eden Hazard, dropped back (vertical rotation anyone?). Lampard was being watched by Glenn Whelan at this point, but the Chelsea midfielder would find an opening into the box when Hazard received the pass from Ramires. His anticipation and timing of the run was perfect: Hazard dodged a tackle before finding Demba Ba, who stabbed the ball into the path of Lampard.

From twelve yards out, Lampard calmly side-footed a low shot, which was miraculously saved by the outstretched leg of Asmir Begovic.

The next chance came around the 34th minute, and Lampard would be the provider this time. A long ball from Stoke’s defense was headed right into the Chelsea number 8, located in the center circle. First touch controlled the ball. The second opened up his body toward the opposition goal. The third executed a perfect long pass over the defense for Ba. The striker’s shot was again saved by that annoying leg of Begovic. Ramires would pounce on the rebound, but a well-timed challenge from Andy Wilkinson got Stoke out of danger.

Lampard’s role in the buildup to the break through goal was less obvious, but no less important. At around halftime, a Chelsea corner from the right was cleared toward the left. The Blues had numbers forward for the corner and were about to be hit by a Stoke counter as Steve N’Zonzi pick up the ball. But Lampard was determined to stop the break, sliding in with a block. The ball rebounded off of N’Zonzi; Chelsea won the throw-in.

Mata got a quick throw from Ryan Bertrand. The midfielder’s crossed was again cleared, this time into the feet of Hazard, who waited for the overlap of Cesar Azpilicueta and slipped the pass into the right-back. The cross, as you all know, was headed into his own net by Jonathan "Donald McDonald" Walters. But let's also look closely at what Lampard was doing as the cross came in from Azpilicueta.

As the right-back prepared to cross, Lampard, positioned at the edge of the six-yard box, dropped back and slipped away from his marker and was ready to head the ball if the cross were to come his way. It didn't. Still, as Walters dove in with a suicidal header, Lampard was the only player moving toward the goal, ready to pounce on a potential rebound. (And some people still wonder why he scores so many goals.)

This was after the break. Around 51st minute. Lampard picked up the ball deep inside his half, turned as he was closed down, and crafted this 60-yard pass, weighted and timed perfectly, to Ba. The striker still had a lot to do, what’s with being sandwiched between Wilkinson and Robert Huth (yuck!), but he managed to pick out Ashley Cole that the far post. But the left-back’s effort was save (by what else? *sigh*) the Stoke goalkeeper’s extended leg.

Here, Lampard took another adventure forward from his central midfield role, this time on the right side. Hazard fancy-footed the ball back to Azpilicutea; the right-back found Lampard with his first touch; not to be outdone by his teammates, Lampard set Hazard free with a first-time-reverse-through-ball into the box. (TOTAL FOOTBALL BIATCH!) Hazard’s cross was put out for a corner.

Lampard stood firm inside the six-yard box as Mata swung in the corner. He saw the ball dropping for him. He squeezed every ounce of energy he had in his body as he rose up for the header, perfectly poised to direct the ball into the back of the net: "194 here I come!!!" Then, along came Jonathan "Party Pooper" Walters, sticking his big head into other people’s business. 2-0.

Hey, how about a first-time-outside-of-the-foot-over-the-defender’s-head-right-into-the-teammate’s-foot-oh-my-god-this-is-frigging-awesome kind of pass?

Lampard was feeling particularly generous. Mata responded with a touch worthy of receiving a spectacular pass and went on to win the penalty when sandwiched between Huth and Ryan Shawcross (Ouch/Eww!).

Hit with power. Straight down the middle. No funny business. One hundred and ninety four.

Tired of creating chances for others? How about a forward run for yourself, Frank? Indulge! Go! It’s 2-0 for Pete’s sakes.

Lampard rushed to join the attack as Bertrand and Ba charged down the left. When the Senegalese’s effort was cleared out to Mata, Lampard found himself twelve yards out from the goal. Seeing Mata’s cross floated over his head, Lampard turned instinctively; as Stoke defenders were pulled toward the ball, he was already one step ahead, waiting centrally for the flick on from his striker. His effort from point-blank range was again denied by part of Begovic’s body (I don’t even care which part at this point).

That stingy Begovic is not going to let you score, Frank. How about some providing again? Will love to see a reverse-first-time-40-yard-oh-I-can’t-believe-you-are-doing-this-again kind of a pass, please!

If we have not seen the passes Lampard has made in this game laid out like this, we might find fault with this pass, which was intercepted by Huth ahead of substitute Fernando Torres. But we know better. It was a great pass, aimed toward a lame target.

Still, it was this quick delivery that set up a brief 4v4 situation in Stoke’s defensive zone as Mata picked up the loose ball before passing it on to Hazard, who then thunder-bolted a shot from about 30 yards out and into the top corner. A goal celebrated with a fanning gesture with his gloved hand. An effort even too hot for the genius that is Eden Hazard.

Against time, everything else loses eventually. Time wins because it does not play by the rule. It is the rule. No matter how much we wish it not to be the case, every good great thing must come to an end. And despite the symbol of infinity he dons on the back of his shirt, Frank Lampard is very likely leave Chelsea behind sooner or later because there are no exceptions to the laws of nature.

Some say it is better to go out with a "BANG!" than to fizzle out. If that’s the case, this performance by the Chelsea legend demands a solid pair of ear plugs.