De Bruyne, Hazard and the false nine: taking a closer look at the tactical possibilities of Chelsea’s Belgian stars

Share All sharing options for: De Bruyne, Hazard and the false nine: taking a closer look at the tactical possibilities of Chelsea’s Belgian stars

You may have noticed over the last couple of days that we here at We Ain't Got No History have come to the conclusion that Fernando Torres and Daniel Sturridge hardly constitutes strong depth in the striker position. Fortunately, there's hardly a bigger buzzword in football right now than the ‘false nine', and the concept may well be applicable to Chelsea if one of our forwards does suffer an injury.

So what exactly is the ‘false nine'? If we take the word of tactics guru Michael Cox (of Zonal Marking), then it is;

An unconventional lone striker, who drops deep into midfield. Francesco Totti perhaps invented it for Roma in 2006/7, Lionel Messi played here when he swapped positions with Samuel Eto'o for Barcelona in 2008/09, and Robin van Persie played the role for Arsenal at the start of the 2009/10 season.

That's a bit simplistic, and I'd elaborate upon it further by suggesting the false nine is a player whose vertical movement ensures space opens up behind him for onrushing attackers. It's a highly sophisticated role that a number of teams have attempted to play.

But in terms of finding people who can actually play the position, there's not many. As evidenced by the examples that Cox provides, you have to be an astoundingly good attacker in order to play it well. I'd add Carlos Tevez for Manchester City a couple of seasons back onto that list, and despite common opinion, I'd stray away from putting Cesc Fabregas for Spain in the same bracket. Although his nominal position would seemingly suggest otherwise, I'd make the argument that Fabregas has never truly been successful as a false nine for Spain: it didn't work against Italy in the group stage of Euro 2012 and it wasn't attempted again until the Final, where I'd argue he played more like a regular centre forward rather than a false nine.

But obviously, the best false nine is Lionel Messi. I'm sure many of you would be familiar with the Argentine. As well as being a superlative-defying dribbler and a fantastic goal scorer, one of his most unheralded attributes is his ability to slip the ball in between the full back and centre back for one of Barca's wide forwards, as seen in this video.

Messi is constantly on the move, laterally and vertically across the pitch, seeking the ball in spaces where he can cause the most damage. Because he's such a frighteningly good technical player, defenders can't simply let him wander: they've got to come up with solutions to stop him getting on the ball.

There are various schools of thought on the most effective solution. The two centre backs can follow the false nine as he drops deep, but that invariably opens up space in behind as a result of the higher defensive line. Likewise, if the centre backs choose not to follow the player, then he has time to collect the ball, turn and attack directly at the defence. Alternatively, you could adopt the method Jose Mourinho has trialled in occasional Classicos against Messi, and push one centre back onto the false nine, while the back four becomes a back three who squeeze together in order to narrow the pitch. If you're a visual person, I've tried to [crudely] draw these up: 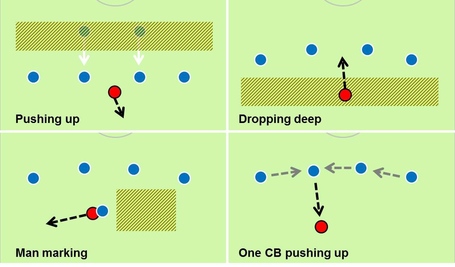 So why are we talking so much about a false nine? Well, we all know Chelsea have depth issues at striker, and playing Eden Hazard as a false nine is most likely one of the options for Di Matteo going forward. Hazard's no stranger to playing as a false nine; in fact he's already done so already in England, at Wembley, no less, when England faced Belgium in a warm up for this summer's European Championships. There haven't been any real clear indications that he could play a similar role for Chelsea (given Di Matteo's tactical style, the evidence probably lies to the contrary) but it's definitely an option for Chelsea going forward.

If the situation did eventually arise, then he could ask compatriot Kevin de Bruyne for some advice, as the attacking midfielder played the false nine role for Werder Bremen against Borussia Dortmund last week.

Why? I'm not overly sure. Thomas Schaaf has a reputation of making some baffling tactical decisions, such as pursuing with the Marko Marin as a #10 experiment for the majority of last season despite all evidence suggesting it didn't work. There had been no indications in any of Werder Bremen's friendlies that De Bruyne would play any sort of false nine role. All the same, he did a decent job getting involved despite such a difficult role, and I've managed to pull put some screen caps that should give you an idea of the false nine role.

In the first image on the left we have De Bruyne making a smart turn past Subotic. Note De Bruyne's relatively deep positioning around the halfway line. Subotic has been extremely bold in his positioning by staying extremely tight to his man (using the pushing up tactic illustrated earlier). He really doesn't need to be that tight to De Bruyne, and the Belgian takes full advantage of the situation. Nothing results from the play, but it's an interesting observation on the tactical possibilities of the false nine role. Indeed, a similar situation arose in the opener against Wigan, where Ivan Ramis moved tight onto Hazard who promptly turned him and slipped Ivanovic through for the opening goal.

Similarly, in our second slide, we have a simple image demonstrating the flexibility of the false nine, as De Bruyne has dropped extremely deep to collect the ball in midfield. That's certainly something we've seen Hazard do in his early games for Chelsea.

Here we have a good example of how the false nine can draw defenders out to open up space in behind. Here we again have De Bruyne drawing Subotic out from the back four, and in the second frame we have Subotic turning on his heels as Eljero Elia bears down on goal. It's a simple move, and if not for some errant finishing, a successful one. These are the exact kinds of opportunities upon which a Chelsea attack would thrive with Hazard at the fulcrum.

In order to take full advantage of a false nine, the ideal is to have inverted wide forwards capable of making those diagonal runs in behind the defence. At Chelsea, the best options are Daniel Sturridge and Victor Moses, but it would take a fair degree of communication and training in order to establish a working false nine model. Along with the degree of difficulty, other disadvantages to the false nine systems is the lack of a direct outlet, as evidenced in the Werder Bremen vs Borussia Dortmund match where Bremen's Sebastien Mielitz was often forced into clumsy distributive efforts, and his occasional attempts to find De Bruyne simply resulted in his side losing possession.

If Chelsea's true no.9 does get crook, then the false nine is definitely an option. Kevin de Bruyne's already had a shot at playing the role, and we may just see Eden Hazard do the same sooner rather than later.