A look at the average age of Chelsea's squad against Arsenal

Chelsea were known as an older team several season ago, but that perception should be changing. Here's a graphical look at the club's average age over it's last five meetings with Arsenal.

Share All sharing options for: A look at the average age of Chelsea's squad against Arsenal

Roberto Di Matteo surprised many when he started Oscar on Saturday and left Frank Lampard on the bench, as many in the media would have you believe that the senior players actually call all of the shots at Chelsea. This got me thinking about recent lineup selection though, as it's seemed fairly obvious from where I've been sitting that Chelsea have been getting less and less reliant on the "old guard" over the last several seasons.

Our opponent on Saturday was one that is generally known for being youthful and exciting, and is often pointed to as an example of how to break in young talent. With that in mind, I decided to do a little comparison. I took the last five meetings with Arsenal and determined the average ages of the teams selected by each club. I plotted those in a graph, and frankly I wasn't all that surprised by the results. Below you can find the graph I made to see the results for yourself: 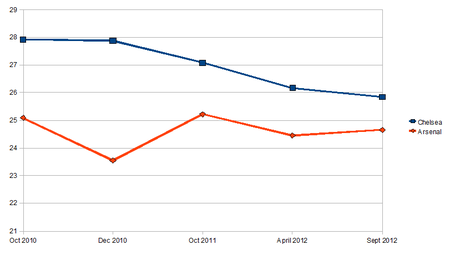 As you can see, Chelsea have clearly been getting younger as a squad over the course of their last five meetings with Arsenal. For a team that was often (and correctly) referred to as "aging" just several seasons ago, this is a very nice thing to see.

This sample covers three different managers, with Ancelotti and Di Matteo each having a pair of derbies sandwiching AVB's lone game in charge against Arsenal.

While Chelsea spent large amounts of money this summer on young and talented players, that appear to be simply an extension of a trend that has been developing over the past several seasons. With that in mind, the recent news that the club may not want to give some of the older players on the squad multi-year deals begins to make a little more sense.