Arsenal and Chelsea employed the same system – 4-2-3-1 – but used their “No. 10” players very differently in this relatively even match. Chelsea made the best of their chances – scoring from two free-kicks – while Arsenal failed to finish some of the good opportunities they created. The 2-1 victory keeps the Blues at the top of the table.

Roberto di Matteo made just one change to the team that started against Stoke City last Saturday; John Terry stepped in for Gary Cahill. This meant the manager kept faith with Ramires-Mikel double pivot leaving Frank Lampard once again on the bench. The selection of Ramires, starting for the third time in 8 days, suggests that di Matteo is looking for pace, energy and a lot of off-the-ball movement from his midfield. Eden Hazard, Oscar and Juan Mata lined up in the attacking band behind Fernando Torres: Hazard on the left, Oscar down the middle and Mata on the right. But they all rotated across the attacking third like three cups under the spell of a magician determined to hide the location that elusive ball.

Arsenal too made just a single adjustment to their last league starting lineup; Thomas Vermaelen returned from injury to replace Per Mertesacker. Gervinho, who likes to drift out wide, led the attack with Santi Cazorla slightly behind him. Lukas Podolski and Aaron Ramsey flanked the midfield duo Mikel Arteta and Abou Diaby. 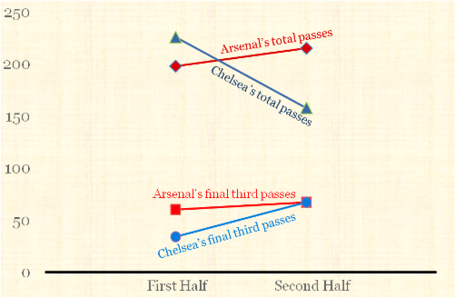 Las weekend, Arsenal were able to out-pass Manchester City in their own backyard, so one might expect them to do the same against Chelsea at the Emirates. That was not the case as Chelsea started very energetically – pressing hard off the ball and passing well when they gained possession. For the first 30 minutes or so, the home side was content to sit back with two banks of four in defensive phase – Cazorla and Gervinho did little tracking back – and the Blues moved the ball around with relative ease.

Despite making more passes than the Gunners in the first half, Chelsea trailed their opponent in final third passes (see above chart). This suggests that majority of Chelsea’s passes in the first half were completed in the defensive half and around the center circle. This trend moved the opposite direction in after the break: Chelsea made fewer total passes but completed more final third passes. This makes sense since the visitors were happy to defend deep and rely on counter-attacks after they retain the lead through Mata’s 53rd minute goal. Arsenal, on the other hand, maintained about the same number of total passes and final third passes on either side of the break.

Different Roles for the Men in the Hole 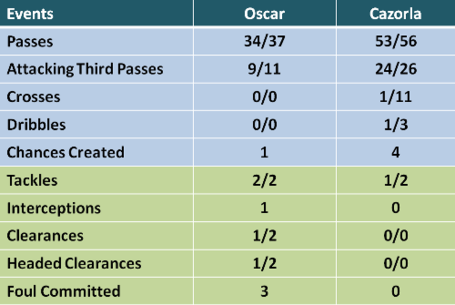 On paper, Oscar and Cazorla played the same position for Chelsea and Arsenal respectively. The "No. 10" role requires the player to stay pretty close to the main striker and be the creative link between the midfield and the attack. While Cazorla stuck to this No. 10 role, Oscar did more defensive than creative work from that position. The young Brazilian pressed and chased tirelessly off the ball. He stayed tight to Arteta as he did to Andre Pirlo against Juventus in the Champions League. This prevented Arteta from influencing the play positively from the deep position – keeping the tempo of Arsenal’s attack and distributing intelligent passes – the way he has been able to do recently. Oscar may not have done much in attack, but his defensive work was very important for the team. As Arsenal tactics blogger @ArsenalColumn tweeted during the game, "To press Arteta is to stop Arsenal." Of course pressing is always a collective effort, but Oscar was the key in the execution of this approach.

People often say that Oscar, Hazard and Mata are almost identical to one another. It is true to an extent: they are all slight, technical players who inject creativity into the team. But Oscar stands out as the only player who can and is willing to take on defensive duties – tracking, pressing and tackling. We must give credit to di Matteo for identifying that quality and utilizing it appropriately.

Cazorla, on the other hand, stayed up high in both offensive and defensive phases. The lack of pressure from him made it easier for Mikel and Ramires to circulate the ball. However, he was involved in almost every Arsenal attack. The Spaniard made the highest number of attacking third passes in this game, distributing the ball left, right and center. He even got a couple of good chances to shoot when his teammates cut back from wide areas. With better finishing, he could possibly have scored. 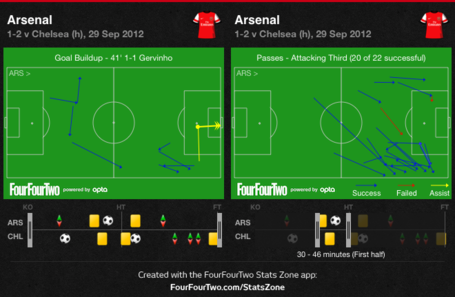 Having played with little urgency in the opening 20 minutes, Arsenal came into life after Chelsea took the lead – Torres getting the better of Koscielny and putting away Mata’s free-kick. As Chelsea dropped down a gear, Arsenal moved up one. With Oxlade-Chamberlain replacing the injured Diaby (the English man took the right flank and Ramsey moved to the central midfield), Arsenal’s right side became more potent.

At the same time, Hazard (or any other player rotating into the left wing) provided little protection to Ashley Cole who was bombarded by Ramsey, Oxlade-Chamberlain and Carl Jenkinson. So the Gunners attacked that flank in the last 15 minutes of the first half and it was of little surprise that they got the equalizer from that route. Graham has already done a detailed analysis on how Chelsea conceded that goal – Oxlade Chamberlain’s low cross from the right escaped Cole’s reach while Gervinho fooled Terry and Luiz with a smart, but rather simple, move to generate space to shoot. It doesn’t reflect kindly on Cole, Terry and Luiz, but the Gunners had been knocking on Chelsea’s door from that side for awhile before the goal.

Second Half and Changes 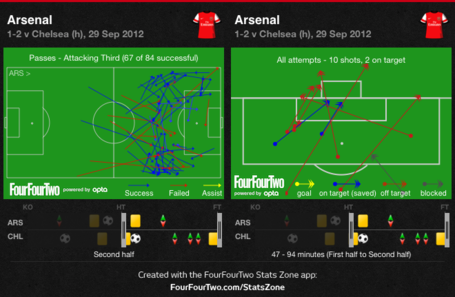 Chelsea would again take the lead soon after the break without playing spectacularly and from that point on, they were happy to drop back and defend. Arsenal’s attack came down both flanks with fullbacks Gibbs and Jenkinson pushing forward. Gervinho’s diagonal runs to and from the wide areas also caused problems for Chelsea’s defense. In the first half, the home side managed 5 goal attempts, 2 of which came from inside the box; after the break, they mustered 10 goal attempts, 7 of which unleashed from inside the box.

Di Matteo made his first change at the 73rd minute, bringing on Victor Moses for Oscar. The Nigerian went to the left wing to provide support for Cole. It was clear that Oscar needed to come off since the Brazilian has covered a lot of ground. The choice was between Moses and Ryan Bertrand. The fact that di Matteo chose the former suggests that he wasn’t comfortable with the 2-1 just yet. Moses could offer better attacking threat to find a winner if Arsenal were to come up with another equalizer.

Strangely, though, the game took a weird turn after this substitution. Chelsea were unable to threaten from the break – the plays broke down either due to poor dribbling or good tackling. Meanwhile, Arsenal were also making basic errors like misplaced passes, offside runs and wayward shooting. It should be noted, however, that Petr Cech pulled of two great saves in this half to keep Chelsea afloat. David Luiz, carrying an injury, was replaced by Gary Cahill; and Bertrand later came on for Mata. These changes made little difference to the game. 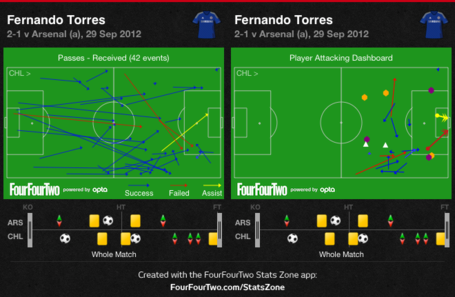 The season may be young but Fernando Torres’ performance has already gone through some ups and downs. In this game, the striker was riding some high waves. Not only does he score an excellent goal, he was very much involved in the game from start to finish. He received a total of 42 passes in this game, the highest he has received in the six league games played so far (Wigan, 22; Reading, 32; Newcastle, 37; QPR, 25; and Stoke, 24). We know that he’s not a target man like Didier Drogba, but he does okay when it comes to receiving long passes.

He also worked hard off the ball to press and hurried Arsenal players in possession of the ball. It was also neat to see him play another one-two with Mata before setting up the midfielder for a shot (blocked) in the second half. They have pulled off the same move against Stoke and Wolves (Mata scored from that one). They clearly like each other (very much) off the pitch so is this one-two connection a form of footballing bromance? Who knows but it is positive for the team.

This was a big game and Chelsea got the big result. The performance might still leave us with some lingering questions – where’s our creative midfield or consistent width, for instance –, but the team did what they needed to do. They exploited the opposition’s weakness (defending set-pieces) and did just about enough to pull off the win. Di Matteo prepared the team well for this game and picked the right approach.