Analysing Arsenal's equaliser at the Emirates

Share All sharing options for: Analysing Arsenal's equaliser at the Emirates

Chelsea beat Arsenal 2-1 at the Emirates Stadium on Saturday, an impressive way win and the most important result of the young season. We know how the Blues scored -- a pair of set pieces, a pair of mistakes by Laurent Koscielny (and plenty of help from Vito Mannone). There's not much to analyse there from our perspective. They were good deliveries from Juan Mata and Fernando Torres had a very nice finish, but waiting on errors from opposing centre backs isn't exactly sound strategy. Those goals aren't repeatable.

But the one we conceded is a different story entirely. Let's take a look at how it all unfolded.

Arsenal begin with the ball in their own half. There's no threat here -- Chelsea's back line had been well organised throughout the match and the hosts had never seemed that likely to break them down. So what happens?

Laurent Koscielny passes the ball out to right back Carl Jenkinson, who charges out over the halfway line. This is the Arsenal right -- Jenkinson and Alex Oxlade-Chamberlain -- versus the Chelsea left, which is comprised of Eden Hazard and Ashley Cole. What happens next?

Wait, how did we get here? Cole and Hazard are both doubled up on Oxlade-Chamberlain while Jenkinson has the ball in acres of space. The culprit, as it turns out, is a quick one-two. Jenkinson passed to Oxlade-Chamberlain, who was being marked by Cole. That pass, also drew Hazard (perhaps suffering from an excess of enthusiasm) into the winger as well, creating a big space into which Oxlade-Chamberlain could return the ball. Which is exactly what happened.

Jenkinson had space to make a run into the centre, and that's what he did, laying the ball off to Mikel Arteta about 25 yards from goal. Here's where the first major mistake happens. Hazard, once again, is drawn to the ball, but Cole's the real culprit, getting drawn inside by Jenkinson's run despite the fact that absolutely nobody in an Arsenal shirt's going to be able to attack that space. Chelsea are now too narrow, and with Hazard charging away from Oxlaide-Chamberlain, Arteta has a simple pass to open the Blues up on their left...

...which he makes, of course. Hazard is chasing, and Cole is marking nobody but not close enough to close down the ball. Gervinho's still sandwiched between both Terry and David Luiz. Although the flank's been torn apart, Chelsea still look good in the centre.

Whoops. Alex Oxlaide-Chamberlain crosses, and both centre backs drop back, for reasons I can't quite fathom at the moment. Cole somehow fails to deflect the pass even though it's within inches of him, and Gervinho's suddenly free. It takes a good turn and a good finish to put it away, but it also took a severe breakdown by the Chelsea defence, with Cole, Terry, David Luiz and Hazard all at least partially responsible.

I thought it'd be interesting to show Hazard and Cole's movement through this play, so here's a rough graph (i.e. a rough sketch): 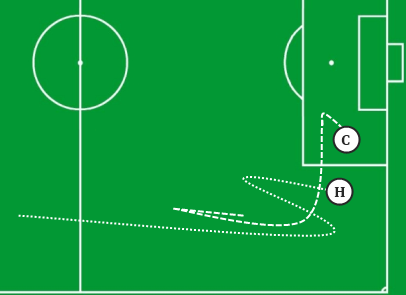 Not much more to be said. Although the mistake by the centre backs allowed what should have been a clearance to turn into a potentially costly Arsenal goal, it was just the final straw. Gervinho's goal came from Cole and Hazard getting beaten badly in the defensive third by Jenkinson and Oxlade-Chamberlain, who played some very intelligent football to open Chelsea up.

We earned the three points anyway, so no harm done, but we can still learn from mistakes like this. Some more discipline from Hazard and better threat-recognition from Cole (who should know better) and this attack dies very early on.