Share All sharing options for: Arsenal vs Chelsea: Tactical Preview (with confirmed lineups)

Roberto Di Matteo's selection of Mata, Hazard and Oscar reprises his selection from last week, a match where Chelsea dominated possession but struggled to find a break through. Chelsea's approach will remain unclear until kick off, but counter attacking will be at the forefront of their play, seeing as it is such a strength of the squad as whole, a thought echoed by Fernando Torres in an interview with the official site earlier today: "We have been working this week to work against that [Arsenal's possession], and the key can be for us to win the ball back and try to counter-attack quickly,' Torres said. 'It's important that we use the ball effectively and find spaces. We have players who can find spaces and can counter-attack well. Attacking against Arsenal it is important to find the last pass, and we have confidence we can do this.'

The midfield battle will be crucial. Chelsea will be looking for their attacking trio to drop deep and deliver the ball up field (especially important with Ramires presumably playing in the pivot). The other scenario would see Oscar playing in the pivot, and although this seems unlikely, it would allow Ramires to shift out to the right wing and play as a defensive winger against Arsenal's strong left flank. Whoever plays on that flank will have the job of tracking Gibbs runs into deep positions upfield. 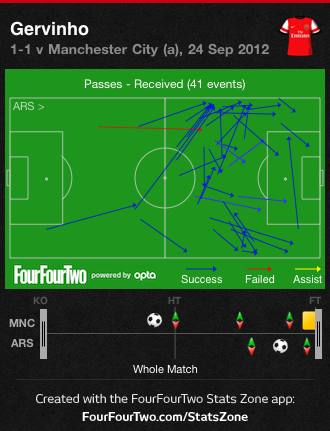 Arsene Wenger has kept faith with Gervinho as his centre forward following the Ivorian's impressive showings against Southampton and Manchester City. As a winger technically out of position in a central position, it doesn't come as a surprise that Gervinho is more comfortable playing in the channels, even when designated as Arsenal's focal point. That's not to say that he is a false nine, instead, he drifts laterally across the pitch as you can see from his passes received chalkboard from the away fixture against Manchester City. Against deep defences, Chelsea's own centre forward Fernando Torres also moves out to the flanks in search of space. In a game where both defences will focus on establishing their shape, expect to see lots of sideways movement from both centre forwards to escape their markers.

Interestingly, Per Mertesacker has been overlooked in favour of the returning Thomas Vermelaen despite the German's impressive run of form. That means for the first time this season Arsenal will have the most used centre back pairing of last season playing together. That's not unusual: the two struck up a strong partnership, with Vermelaen the more combative player being drawn higher up the pitch, in the knowledge that the Frenchman will drop in behind to cover. Presumably, Wenger is worried about Chelsea's pace, particularly on the counter attack, and with Chelsea starting Hazard and Torres, these fears are not unfounded. Chelsea's attacking trio will be fluid and mobile, and expect to see Koscielny being unafraid to move out into the channels to break down attacks.

A strong centre back pairing isn't the only secret to Arsenal's unusual defensive stability this season. "We do a lot of defensive work as a whole team, as a whole unit, getting your positions, getting into the habit, which we never really had before," revealed Theo Walcott earlier today. The English winger won't be starting (he's on the bench), but Aaron Ramsey will be in the right wing position. Ramsey will tuck inside and add more numbers to Arsenal's expected dominance of possession. This will open up space down that left channel for Chelsea, and expect Ashley Cole to make surging runs forward to provide width, as he did so effectively against Stoke to score the winner.

This energy from fullback will be crucial. Di Matteo has retained the same attacking trident that started that match, where all three wanted to come into central positions, which lead to confusion and narrowness in Chelsea's attack. Although Cole scored the winner, Victor Moses introduction on sixty-six minutes was crucial, and clever use of the bench will again be important today. If the game remains a stalemate after half time, expect to see the explosive winger enter the fray.

Click for the full opposition scouting report on Arsenal