Chelsea loanee Kevin De Bruyne had an excellent game for Werder Bremen against Stuttgart, so I've broken down what was so excellent about his performance.

Kevin de Bruyne is one of the bigger names on the unusually large list of names currently spending time on loan from Chelsea at other clubs. We had a bit of a look at De Bruyne's game when he played an unusual false nine role in the opening game of the season, and with the 21 year old having enjoyed a fantastic game against Stuttgart last Saturday, I thought it would be an appropriate time to have a closer look at exactly what De Bruyne has been doing. 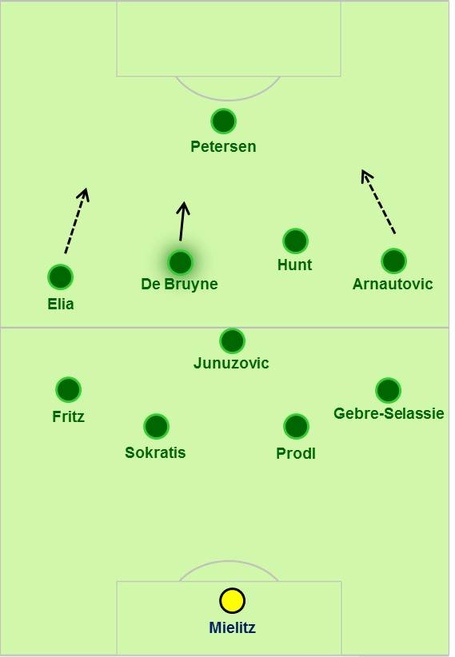 If you take a look at the image on the left, you'll get a good idea of the structure that Bremen was playing. For the match against Stuttgart, Werder Bremen manager Thomas Schaaf elected to play De Bruyne in the same central midfield role that the Belgian had occupied for the game against Hamburg, a game in which De Bruyne had opened his scoring account in Germany. On the whole, De Bruyne looks far more comfortable here than he ever did in the false nine role, as this is a similar position to what De Bruyne played for Genk towards the tail end of the season. Partnered with the attack-minded Aaron Hunt, this is a proactive approach for De Bruyne, and the defensive midfielder - Zlatko Junuzovic here, but Philipp Bargfrede was selected last week - is left to cover the defence on his own. Junuzovic did a particularly manful job of it here, and he was assisted by the discipline of his wide attackers, Eljero Elia and Marko Arnautovic, who dropped deep, often dropping into line with Junuzovic. De Bruyne and Hunt lead the pressing, taking turns to move forward and assist Nils Petersen in closing down the man in possession.

In this regard, De Bruyne is highly aggressive, extremely willing to break out of the defensive shape and lead the pressing (a role similar to that of which Ramires adopted for Chelsea last season under Andre Villas-Boas). Sometimes this was effective, but he needs to be cleverer in his decision making: often, the two wide players hadn't got into position, and space would open up for Stuttgart down the flank.

De Bruyne displays a similar aggressiveness in attack, actively seeking to get into central attacking positions, close to Petersen. He is a very direct attacker, preferring to pass rather than shoot: this was especially evident when he went for an ambitious chip from forty yards out, and failed.

However, this particular trait did not let him down when it came to the opening Werder Bremen goal. De Bruyne started the move, collecting the ball from a defensive position near his own penalty area, and continued his positive run down the centre of the park. He showed excellent awareness of where his markers were with a cleverly cushioned touch, before driving into space and unleashing a powerful shot. The goal was well taken, but his alertness and pass to launch the counterattack was particularly eye-catching, and in a Chelsea squad seemingly designed for powerful transitions, he would fit in well. On a broader note, De Bruyne's excellence in this role would see him suit a Chelsea 4-3-3 well, as a position in the double pivot of 4-2-3-1 would expose his occasionally poor defensive positioning.

The ability to launch these quick transitions was continually evident throughout the second half. In the forty-eighth minute, De Bruyne intercepted the ball calmly and played a series of one-twos with his defenders, before surging into space on the left flank and collecting a long pass from Sokratis. It was a fantastic piece of counterattacking play, even without a goal to show for it. Another example was his splendid diagonal ball to Elia midway through the half, which switched the angle of attack and caught the Stuttgart defence unawares.

For all these exhilarating positives, De Bruyne still has much to work on. He displayed some poor decision-making, and there was often a pocket of space to be found in the space between him and his holding midfielder. All the same, he was one of, if not the best players on the pitch, and if his progress continues in a similar upward spiral then he will certainly be a new piece for Chelsea's jigsaw when he returns next season.