The main story behind Chelsea's start to the season hasn't been the form of Eden Hazard, or Oscar, Fernando Torres' inconsistent performances or even the weird mess in centre midfield. Instead, it's been the fullbacks.

Three goals and two assists from the first six matches of the season is a ridiculous return for a pair of players whose purpose is primarily defensive. The offensive numbers aren't flukes, either - both fullbacks are routinely getting into dangerous positions and have given the opponents serious problems in every game the Blues have contested.

Chelsea fans are no strangers to the attacking fullback. With Ashley Cole in the team, we're used to seeing players bomb up and down the wing, and there's an argument to be made that he's been one of the three most tactically important players at the club during his six-year career at Stamford Bridge.

Under Andre Villas-Boas, the fullbacks were pushed extremely high up the pitch. A major feature of the Portuguese's ‘high line' was an aggressive approach from the wide defenders, which meant that the flaws of, say, Jose Bosingwa, were even more fully on display than usual. When Roberto di Matteo took over, he reverted to a more conservative shape, holding the defensive line near the penalty box and using the likes of Ramires and Salomon Kalou to further reinforce the flanks.

But Villas-Boas praised di Matteo for holding a similar footballing philosophy, and it comes as no surprise that Chelsea have reverted to something closer to the way they played at the beginning of the 2011/12 season - we saw that that was the plan as early as the preseason friendlies in the USA. And said plan has led to some very strange scenes at Stamford Bridge.

Against Stoke on Saturday, the winning goal was scored by Ashley Cole after Juan Mata flicked on Branislav Ivanovic's cross. It's the latter whose play is most interesting under the new setup, and the more you dig, the weirder it gets.

There are, more or less, two broad classes of fullbacks. The first is converted from wingers. Talented wide players who demonstrate some defensive ability can get pushed into the defensive line if they're not quite good enough as a pure attacker. The second class is the displaced centre half, a born defender who's capable enough on the ball and fast enough not to embarrass himself going forward.

Speaking in generalities again, we'd normally expect type one fullbacks to better going forwards than they are defensively, and for that to be reversed for type two players. And Ivanovic definitely falls into the latter camp - the 28-year-old was signed from Lokomotiv Moscow as a centre back, and despite being converted to a fullback under Carlo Ancelotti four years ago, he still sees himself as a more naturally central player.

We're used to seeing Ivanovic as a hugely capable defender, capable of shutting down the flank unless he's having an off day. His height and pure power has, over the past few years, given Chelsea a very useful option at right back when going against more physical opponents, and he's made a habit of obliterating tricky players as well.

Historically, Ivanovic has been better at defending than attacking. He's never looked entirely comfortable on the ball, and although Michael Cox was being a little unfair on the Serbian when he laid out the reasons Chelsea were looking to upgrade at right back, he captured the general sentiment. Ivanovic is a centre back playing out of position, and everyone knows it.

Only now he isn't. I don't know what Ivanovic is anymore. He's certainly showing some attacking prowess - he notched Chelsea's first goal of the season on a fast break against Wigan Athletic and then doubled his tally a few days later at home to Reading. We're used to seeing Ivanovic score, but in the past he's mostly been a threat on set pieces, not from open play. Now he's regularly causing havoc in the final third.

However, his new style has come at a significant cost. An illustration: 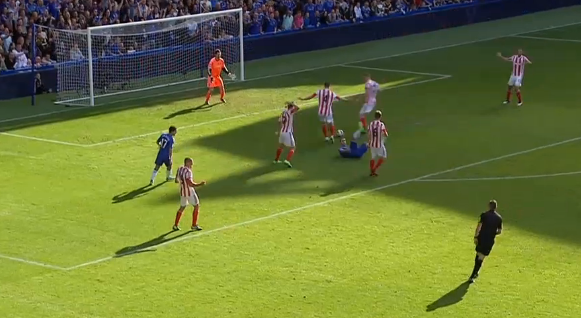 This is Branislav Ivanovic in Asmir Begovic's penalty box on Saturday, trying to claim that he'd been fouled by Marc Wilson after charging in from the right flank. In open play. 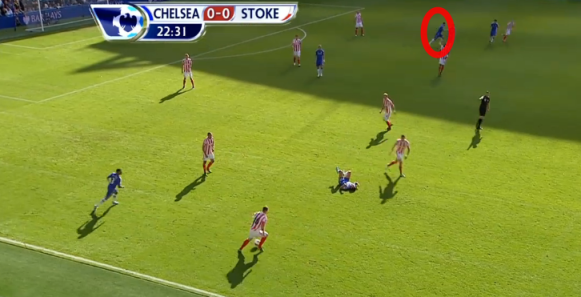 This, fifteen seconds later, is Stoke City on the ball. Ivanovic, who has travelled maybe 20 yards in the elapsed time*, has been helpfully circled. I am unable to point out where he probably should be in this image, because the expected position for a right back in this situation is off the screen and to the right. Fortunately, nothing came of the attack.

I'm not being picky here. Ivanovic's aggressive positioning has seen him caught out something like half a dozen times per match this season, and it's something that teams are starting to exploit - Tony Pulis threw on Matthew Etherington to take advantage of the space that was being left on their left wing, and for a few perilous minutes it looked as though the Potters' gambit was going to pay off.

Instead, Chelsea won the day, thanks primarily to both fullbacks popping up deep in the opposition's half. But that fact that it worked doesn't mean that the system has deep-seated issues, ones that defensive wingers* and two deep midfielders can't necessarily solve.

*Victor Moses is showing that he can fill this role in a pinch, which is heartening to see.

It's not just Ivanovic that gets caught out. Cole's been done a couple of times as well (including once for Pavel Pogrebnyak's goal at Stamford Bridge, the only one Chelsea have conceded from open play in the Premier League this season). But the left back is faster, more positionally aware and less prone to massive errors of judgement than his right-sided counterpart, which means that the Blues are never quite as open down their left as they are their right.

When most defensive players are pushed into a more attacking role, they tend to be fairly cautious, bringing what is perhaps an excess of discipline to their newfound position. Ivanovic seems to have gone the other way - he's discovering that he can be a very dangerous attacking player and seems to be reveling in it, to the point that it's destroying his defensive work.

This is quite literally the opposite problem anyone expected us to have a right back this season, and it leads to a very strange thought: A more naturally attacking fullback would lead to better defending on the right.

Cesar Azpilicueta was brought in from Marseille in the final days of the summer transfer window. At 23 and with plenty of development left, he should be considered a prospect rather than a viable full-time starter for Chelsea. A midfielder turned fullback, Azpilicueta learned his trade with Osasuna before moving to Ligue 1 in 2010. He's much more naturally attacking than Ivanovic, and that aspect of game is far more developed than his defending.

But said defending is still far better than what his more senior teammate has put in this season. If you're an attacking fullback, one of the major aspects of your job is knowing when to pull back to a more defensive position rather than madly pressing forward. Cole has always been one of the best in the world at reading the game, while Ivanovic has the self-control of the Roman legions at Cannae.

Azpilicueta's got enough sense to know when to return to the fold. That alone makes him a more sensible (is less amusing) choice than this incarnation of Ivanovic. If Chelsea can integrate him into the team - and you'd think that the upcoming League Cup match against Wolverhampton would be a good opportunity for him to do so - they'll have a less demented option at right back when they need to attack, and presumably they'll be able to put Ivanovic back on his leash by giving him clear instructions to defend when they want to play more conservatively.

Because while Chelsea's current state of fullback play is fascinating, entertaining and leading to more than a few goals, when it comes to crunch time there's almost no way it's sustainable. Ivanovic need to be reigned in, and Azpilicueta looks like our best solution.