Share All sharing options for: Chelsea vs Stoke: Match Analysis

Chelsea remained top of the league with a narrow 1-0 win over Stoke City, a side whom both Manchester City and Arsenal failed to beat earlier this season.

Stoke symbolise the diversity of football. Where the vast, vast majority of managers would prefer to play one-touch short passing football, Tony Pulis ignores this trend and instead plays to his side's strengths in the air with direct play from defence, in effect bypassing midfield and giving the opposition central defenders a real headache. With that in mind, it was hardly surprising to see Peter Crouch take a spot at the focal point of the Stoke attack, with Charlie Adam playing close in behind. The rest of the side was largely as expected, with Jon Walters again positioned on the right flank as he was against City, despite being a nominal second striker.

Roberto Di Matteo made three big selection decisions: he rewarded Oscar for his fantastic performance against Juventus with a start in the attacking band of three, Ramires was positioned in a double pivot for the first time this season, and Gary Cahill was preferred over John Terry at the back.

Chelsea were in control for most of the match, but struggled to break down a packed Stoke defence who looked to Peter Crouch and set pieces as an attacking outlet.

The biggest talking point from a Chelsea point of view was the selection of Oscar, Juan Mata and Eden Hazard in the same side for the first time. All three are highly technical and excitingly creative players, and against a Stoke City side that would pack numbers inside their own half, it was interesting to see how they would combine. The prospect was tantalizing.

While the trio managed lots of touches on the ball - Mata and Oscar recorded the highest amount of touches, while Hazard managed 54 in his sixty-two minute spell - they were often playing in similar spaces in the central attacking zone. All three can play on the wing, but like to drift inside and get on the ball. With Steven N'Zonzi and Glenn Whelan patrolling that zone, the result was a packed midfield zone, with little width from either side. The player influence screen from the FourFourTwo 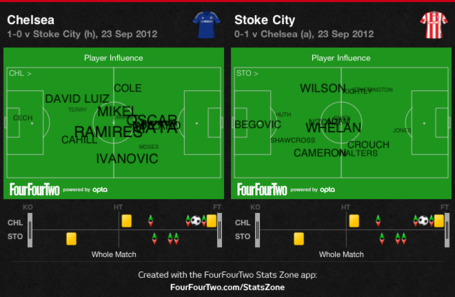 StatsZone app will show you just how congested it was in that space.

It wasn't surprising to see Chelsea encounter such problems with this system - the nature of how all three players like to play is an immediate clue. At Internacional, Oscar was clearly the side's playmaker, and wears the famous no.10 for Brazil. Hazard was Lille's dominant source of creativity in his final season at France, while Juan Mata was likewise for Chelsea last season. They rotated positions fluently (Oscar and Mata recorded the highest pass combination), but all wanted the ball in spaces around the penalty area, and therefore they often occupied a zone roughly twenty metres wide, in front of the Stoke defenders.

In some ways, they mirrored the problems that Spain encountered at the European Championships - both wide players wanted to come inside to collect the ball, and there was a lack of drive both out wide and in behind the striker. Fernando Torres was often crowded out as he looked to link up play, and he would have benefited from a team mate making driving runs into the space behind the Stoke backline. This was the sort of game in which Chelsea would have benefited from more flexible options at centre-forward: Torres game is all about running into space, and Stoke weren't going to provide that.

As it was for Spain, Chelsea's initial response was to push the full backs higher up the pitch. Ashley Cole showed great attacking intent down the left hand side, but Walters was disciplined enough to track him into deep positions, even if they came at great cost to the ability of Stoke's attack. On the other flank, Branislav Ivanovic was often found in unusual positions, appearing in the penalty box on several occasions. While his intent was clear, his positioning was less so: he often congested the play further by coming inside, rather than sticking to the touchline as Di Matteo would have preferred.

The effect of this was to grant Stoke room on the left to build their attack, and Charlie Adam often picked up the ball in that area of the pitch. However, the majority of Stoke's play was slanted to the right, as Peter Crouch likes to receive aerial balls from right of centre positions. It was interesting to see Cahill and David Luiz step off Crouch and allow him to control the ball, most likely because neither Chelsea centre back was physically going to be able to compete with Crouch aerially. Crouch very rarely took the opportunity to turn on the ball and run at this deep defensive line, preferring instead to lay it off to onrushing midfield runners.

Charlie Adam's role was particularly interesting in this regard: he played high up the pitch, but with Stoke mainly defending deep inside their own half, he rarely received the ball in dangerous positions, and lacked support from his teammates. As a result, he dropped deeper into the midfield zone, and with Walters pegged back by Ashley Cole, and Crouch was often left isolated. Stoke's best chance of the game came from a set piece which Walters crashed against the ball, a damning indictment of their creativity in open play.

There was little tactical development in this game: Stoke were more concerned with preventing Chelsea from scoring, and the onus was on the home side to provide the impetus. The Chelsea attack was more fluid, with the band of three (Mata and Oscar in particular) more willing to venture into deeper positions, thus reducing the crowding in that zone.

Despite this, the problems remained. Di Matteo's first change was a smart one: he brought Victor Moses on for his second appearance, and removed the largely quiet Eden Hazard. Moses made an immediate impact with a strong dribble down the right flank, and provided drive and width to that right flank. While he occasionally drifted into central zones, he mainly stayed wide and looked to play low crosses into the box, and in this regard, he was incredibly effective. Ivanovic and Cole continued to storm forward to provide extra bodies on the outside.

Stoke's first change was to introduce new signing Michael Owen in place of Charlie Adam, and the striker took up broadly the same position, trying to collect Crouch's knock downs. The knock on effect of this was to reduce Stoke's numbers in the midfield zone. Oscar in particularly began to find more space around the box and finished the game with five shots, the most of any player.

Finally, in the 84th minute, Chelsea broke through. The move stemmed from quick passing across the midfield, before Ivanovic, who atypically was in space on the far side of the flank, played a low cross for Juan Mata, whose inventive flick set Ashley Cole up in a good position. Chelsea's attacking ambition had paid off, with the width coming from the fullback. Chelsea will need more of this if they are to continue with an Oscar-Hazard-Mata triuminvate.

Having finally scored an opener, Chelsea went about defending the lead, at which point the flaws of the Chelsea's midfield pivot were sorely exposed. While the Mikel-Ramires partnership was effective at regaining the ball on transitions (Ramires finished with three, easily the most of any player) , the same cannot be said about their distribution and ability to control the tempo of the game, especially in the last five minutes (at which Frank Lampard had replaced John Obi Mikel). Midfield control has been a big issue for Chelsea for most of the past year, and in a game where they needed to calm the play done and retain possession, they instead turned to John Terry and a weird defensive formation. The Ramires-Mikel duo will be a useful option in games against weaker opposition, but Chelsea's needs in central midfield remain clear.