Chelsea's perfect league run came to a grinding halt at Loftus Road as Queens Park Rangers battled for a goalless draw. It was a pretty even game would have had goals if not for poor finishing from both teams. Most (including me) expected Chelsea to dominate this game, but that was not the case at all; the Blues trailed their opponent in both attempted passes (400 to 452) and completed passes (309 to 373). Both sides were guilty of giving away possession cheaply in midfield and in final third, which does not make for a spectacular viewing. QPR definitely upped their game in front of the home crowd -- they pressed, ran and chased constantly, and Chelsea found it hard to deal with their opponents energy and determination.

The Selection and the Key Moment 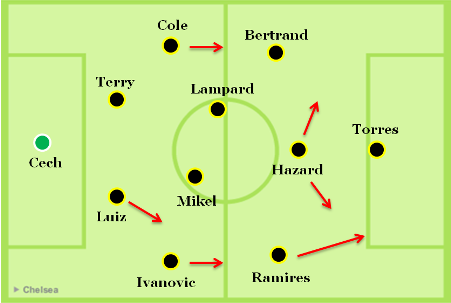 Chelsea started with the above eleven in the usual 4-2-3-1 formation. Interestingly, Roberto di Matteo used two defensive wingers -- Ryan Bertrand and Ramires -- despite using just one in every game Chelsea has played so far. From the Community Shield to the Super Cup, Chelsea started with a defensive winger (Ramires/Bertrand) on one flank and a more creative/adaptive player (Hazard/Mata) on the other. Are there good reasons to change this formula against QPR?

I think there are good reasons to have rested Juan Mata. The guy hardly got any break during summer. And with Juventus coming to Stamford Bridge in midweek for the first Champions League group game, it is sensible that Mata be given a day off.

Looking at the bench (Ross Turnbull, Gary Cahill, Cesar Azpilicueta, Oriol Romeu, Oscar, Victor Moses and Daniel Sturridge), there were a couple of player who could have started in the wings in place of one of the defensive wingers. Sturridge can play on the left, but he would rather play down the center. Oscar and Moses can play on either flanks, but neither of them has started for Chelsea yet, and Loftus Road, with its hostile atmosphere, might not be the best occasion to introduce them from the start.

So I believe that are sensible reasons to have started with two players who have performed for di Matteo on big occasions (i.e. Champions League 11-12). Plus, QPR started with Jose Bosingwa and Fabio, two fullbacks who like to go forward; this meant that Chelsea can play counter-attacking football with Bertrand and Ramires breaking forward into the space available on the flanks.

This, I suppose, was di Matteo's plan, and it almost worked out during the early stages of the game. Ramires got in behind Fabio around the fourth minute before making an early cross to Hazard, whose shot was brilliantly saved by Julio Cesar. Another great chance, which came around the 15th minute, also involved Ramires' run down the right and Fernando Torres skipping past Fabio before cutting back to shot with his left.

But it all changed with Fabio's injury in the first half: Nedum Onuoha came on to play on the right while Bosingwa switched to the left. This injury was a blessing in disguise for QPR because now they have a more conservative fullback Onuoha on the right and the world's best out-of-position defender Bosingwa on the left. Neither of these players go forward recklessly, leaving little space for Bertrand and Ramires to break into. Here's the result of playing two defensive wingers when opposition doesn't commit too many men forward in attack. 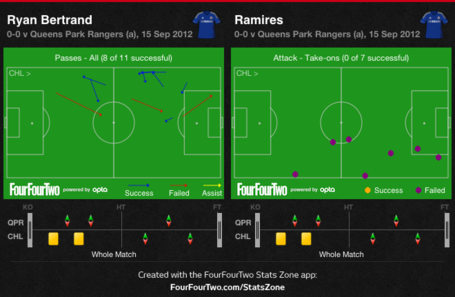 Bertrand on the left never really got into the game: he only attempted 11 passes and completed 8 of them. That is peanuts compared to QPR's left winger Park Ji-Sung's numbers: 30 attempted passes, 26 completed passes during the time Bertrand was on the pitch. Bertrand's best work is done off the ball: he tracks back and runs tirelessly. But he contributed little to attacking play and possession game. Ramires on the other flank was more involved: 30 attempted passes, 25 completed passes. But his day is summed up neatly by his dribble chart: 7 attempted dribbles without any success.

Andrew Johnson's injury in the first half brought midfielder Jamie Mackie, and that made QPR even more defensively solid for the rest of the game. So for about an hour of the game, Chelsea were stuck with two defensive wingers they don't need because of the counter-attacking opportunities they don't have.

So it was pretty clear that something needed to change for Chelsea, and the first change came in the form of a substitution at the 58th minute: Moses on; Bertrand off. The shape remained a 4-2-3-1 with Moses going straight to left wing. But as you can see from the table above which lists the passes completed (and passes attempted) by each team during 6 different time frames, the change did not get the desire result of being able to control the game (i.e. make more passes than your opponent) right away.

It wasn't until when Moses moved to the right, with Hazard moving left and Ramires dropping back into midfield, that Chelsea were able to dominate the game. Here the switch is unclear to me. It was either a move to a 4-3-3 or just another shuffle within 4-2-3-1 with Lampard moving forward a bit. Either way, there wasn't enough time (at least for me) to determine the particular shape used at the end of the game. Di Matteo would only make just another change: a direct switch from Torres to Sturridge.

So did the changes made in the second half give out desire outcome? Well, it depends on what the desire outcome is. Yes, Chelsea were able to control the game better in the closing stages and created a great chance to come away with a win: both Sturridge and Moses were involved in that miss by Hazard. But then again, Chelsea didn't create enough chances to get the winner. With the players they had on the bench, the Blues could have gone all out attack with these changes: Bertrand to Moses, Ramires to Sturridge, and Mikel to Oscar. I think it was the scoreline that kept di Matteo from taking that risk. His team, after all, was drawing away from home, which is far from a unforgivable crime in a long league season. The fans will be disappointed that the team didn't throw the kitchen sink for the win, but it is quite understandable that di Matteo didn't want to lose.

That in a one-thousand-or-so-word-long nutshell is how the game went down. And let me close with a couple of charts and notes. 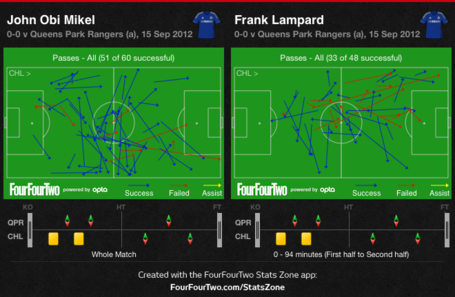 Chelsea's inability to keep possession for the majority of this game stems from the imbalance in midfield. Typically, the two players in the double pivot should have about the same number of passes in each game. That was not the case here. John Obi Mikel thoroughly out-passed Frank Lampard. To be sure, both under-performed in this game: Mikel made an average of 57.3 passes per game in the first 3 league games and Lampard made 57.5 passes per game in the first 2 league games he played in. But the drop in performance in terms of passing was sharper for the England man than the Nigerian. [Part of the problem for Chelsea's midfield was that Bobby Zamora kept dropping deep to be the extra man around the center. You can see his passes received and passes made chart here.] 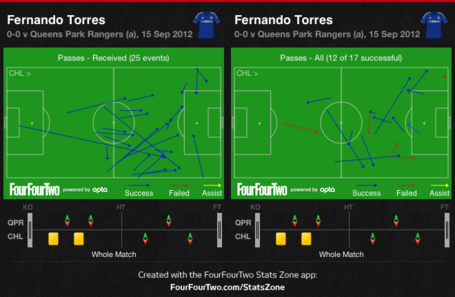 Fernando Torres had a poor game, and your eyes should tell you that. But just in case you are convinced, here's what the numbers have to say. If you were curious enough to click on that link to Zamora's chart, you would have found out that the QPR striker received a total of 50 passes -- that's twice as many as Torres did in this game. So right off the bat, we know that Torres was not as involved in the game as his opposite number did. Part of the reason for this was that Torres failed to win aerial battles in the QPR's half. He only won 2 out of the 7 aerial battles he contested. Some might say he's not a target man, but then he did win 7 out of the 10 aerial battles against Newcastle.

Even if we forgive him for not being involved in the game as much, what he did when he got the ball doesn't tell a positive story either. Of the 25 passes received, 12 turned into complete passes. So what happened to the other 13 passes he received? Two of those turned into successful dribbles, with one of those dribbles leading to a shot on target (that was a brilliant move and the only shot he had in this game). Five were misplaced passes. Four more led to failed dribbles. The rest of the unaccounted received passes probably turned into loss of possession. That is a forward misusing half of the passes he received. That is simply not good enough.

Of course, a player's performance is always weighted by the team's performance; this is a given in this sport. But I gave Torres full credit for his good performance against Newcastle, and I will hand him the same honor here for a different kind of performance. 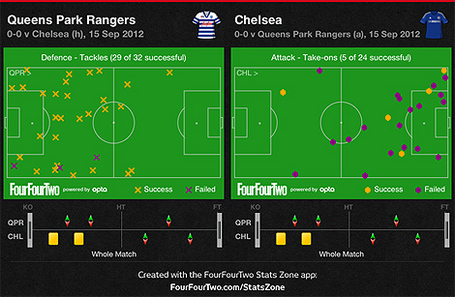 Also, we should give credit where it dues. This was a very good performance by QPR. Despite losing two players to injury in the first half, they fought for the ball all over pitch and defended strongly when it was needed. They ended up with the best tackle success rate of any side this weekend at 91%, forcing Chelsea to have the most unsuccessful dribbles (19) in the league this season. Of course having the home support helped, but their effort was admirable.

My head kind of hurts at this point so let me end with this: Chelsea didn't win the league when they beat Newcastle 2-0 at home a couple of weeks ago and they definitely didn't lose the league because they drew this game away from home.