What do you mean you've never heard of the 'We Ain't Got No History' Chelsea FC Transfer Rumor League? Surely you're not insinuating that it's not something real; that it's something that I just made up? How dare you!

It's the league that wasted no time kicking off its Summer season, the off-season between the last day of the January Transfer Window and the first shot by Willian lasting just 2 days. Since then we've had 44 tributes enter the league - a few as overwhelming favorites (Eden Hazard, Oscar), many others without a prayer (Theodor Gebre Selassie, Ezequiel Lavezzi). Many made actual sense (Luka Modric, Cesar Azpilicueta), while others were utterly laughable (Cristiano Ronaldo, Tim Krul).

It's been a fight to the death and we've all had front row seats. Yes, that's right, it's not quite over yet; a lot can happen in the remaining 3 weeks! But before we check the standings, let's discuss some rules.

The cutoff to be listed in the standings is a minimum of 3 mentions (not including FanShots/FanPosts). High profile victims of this rule include Gonzalo Higuain, Mauricio Isla, Marouane Fellaini...and 25 others.

The remaining 19 are led - and which in no way should be a surprising reveal - by Eden Hazard, who, along with a couple Brazilians, forms the BIG 3 at the top of the league. The rest could only hope to emulate them (or they could be nice and spare us all the drama): 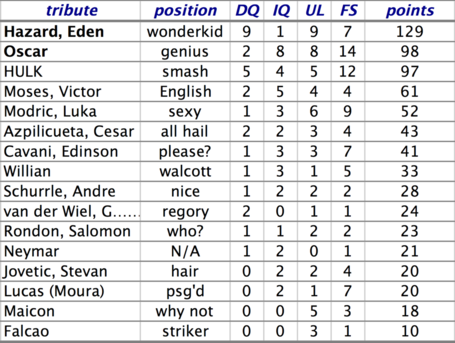 Going by this then, HULK is clearly the next to sign! Yey, science!!